A French Garden for your Living Room 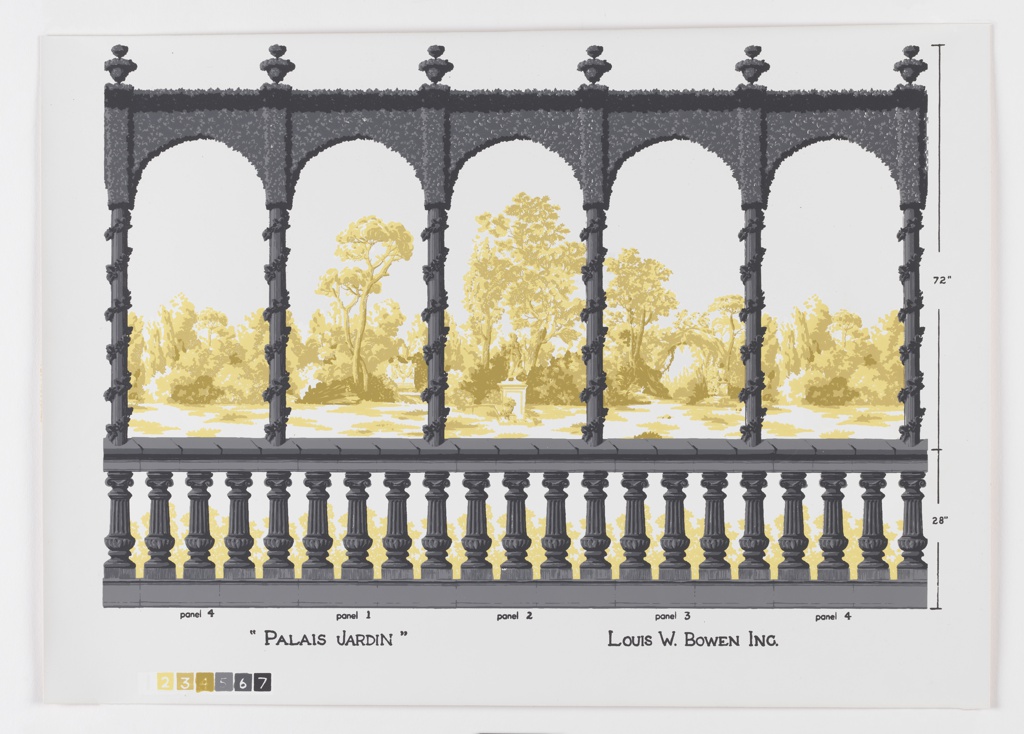 Scenic wallpapers originated in the early years of the nineteenth century, and found a renewed popularity during the Colonial Revival movement in the early twentieth century. Many new designs in scenic papers and murals were introduced mid-century following World War II, and scenic papers did actually serve a purpose in these new homes as the distant view of landscapes can visually enlarge a room, which are typically smaller in post-war construction.

This scenic design is composed of multiple parts which made it more flexible for different room sizes and configurations. The dado section containing the balustrade was separate from the landscape scene and colonnade, so if the room already contained a chair rail or wainscot you could just install the upper portion of the design. Multiple sets of this design can be joined together to completely wrap around a room, if desired. The manufacturer has illustrated this point by showing panel 4 at both the left and right sides.

The design consists of vine-wrapped columns topped by topiary arches, with a topiary urn sitting above each column. A pristine landscape can be viewed through the colonnade, with three pedestals supporting urns or figures marking the presence of man. The balustrade consists of fluted balusters which reveal more growing foliage, very softly colored so as not to detract from the landscape scene above. This design was available in multiple colorways, with contrasting landscape and framework, as seen here, as well as monochromatic color schemes. The architectural framework could also be purchased without the landscape.

Louis W. Bowen, Inc. was one of the leading New York wallpaper studios. Bowen was a student at UCLA until he began working as an assistant for interior designer Dorothy Hammerstein in 1936. Bowen relocated to New York City in 1939 when Hammerstein moved her design business there. He served in the Navy during World War II, and immediately following the war opened his own business, Louis W. Bowen, Inc., to manufacture specialty wallcoverings. He ran this business for forty years while continuing to create interior designs for many clients.