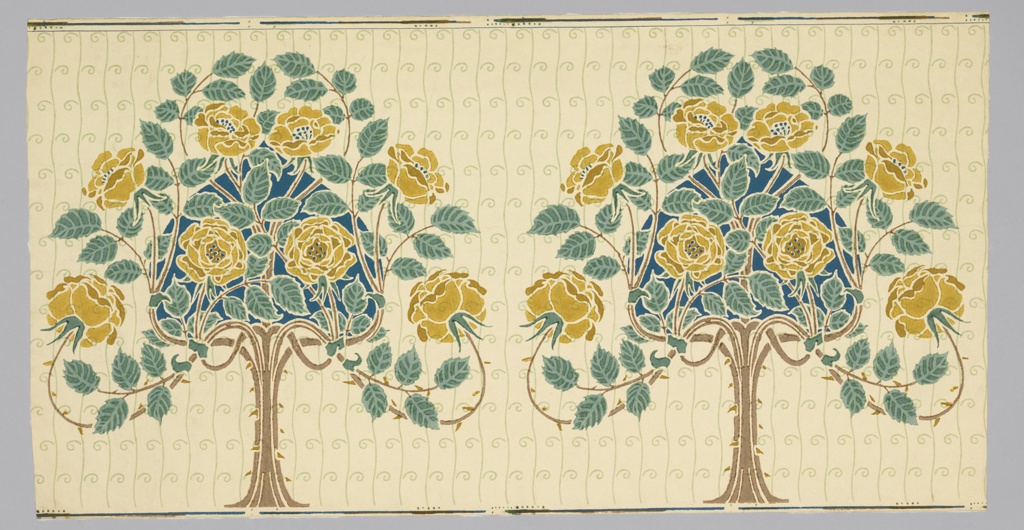 This is a wallpaper frieze containing stylized rose bushes printed on a striped and swirled ground, while an upside down heart motif placed behind the bush defines the shape of the climbing roses. The motif of the rose vines is nearly symmetrical and the delicacy of the scrolling and curving vines shows the influence of the art nouveau style while the flat rendering of the flowers and foliage stay true to Arts and Crafts conventions.

This frieze is part of the “Stamford” decoration introduced by Jeffrey & Co. around 1903. If the frieze was used as printed it would form a rather dense and monotonous row of bushes encircling the room. But as these were the days when professional paper hangers were employed for all wallpaper needs, more complex installations could be accomplished. As shown in the accompanying illustration the rose bushes are spread out with additional space added between each bush. This would require separate rolls of the plain background pattern the bushes are printed on. Each of the bushes sits atop a column of another stylized rose pattern, which alternates between dark and light giving the wall components a nice contrast. Between the columns is a repeating wallpaper pattern of foliage which forms a trellis design. Each of these different elements is then outlined by a narrow border or binder paper. In total, this wall treatment would require five different wallpapers.

Albert Warner, one of two designers for this wall decoration, was the son of Metford Warner who became the sole owner of British wallpaper firm Jeffrey & Co. in 1871. Albert and his brother Horace became partners in the firm in 1898, shortly before this piece was designed. Albert was quite a proficient designer as there are numerous wallpapers designed by him in the Victoria & Albert Museum collection.