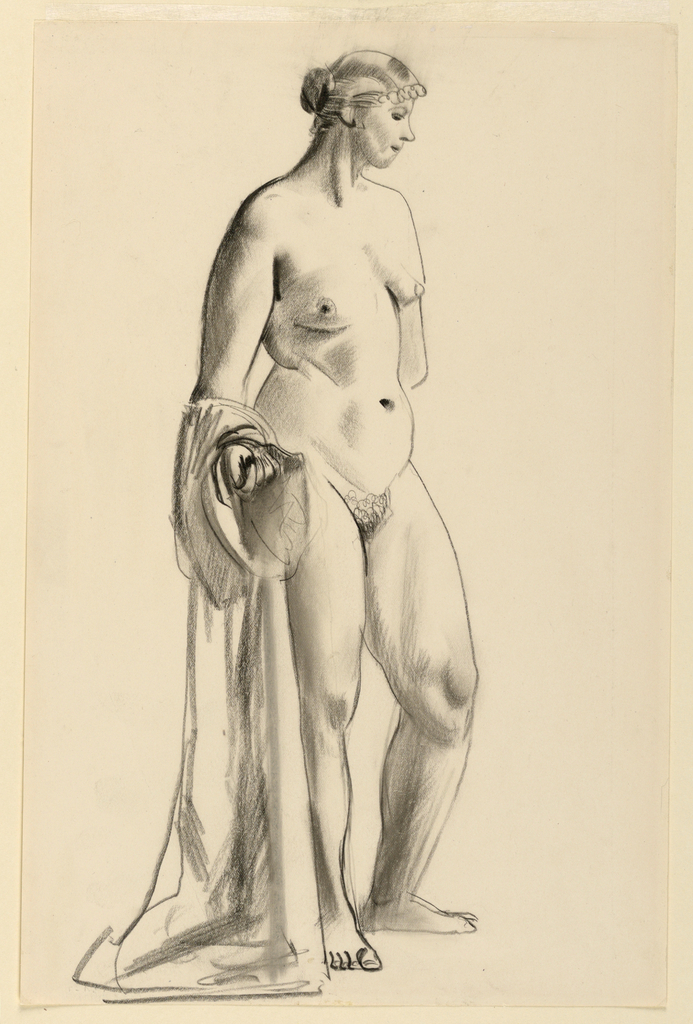 George Bellows (1882–1925) revolutionized the field of graphic arts at the beginning of the twentieth century by pushing the boundaries of lithography. In his own words he strove to “rehabilitate the medium from the stigma of commercialism which has attached to it so strongly.”[1] In 1916 fellow American artist Albert Sterner (1863–1946) introduced Bellows to printmaking. At the time intaglio prints, in etching or drypoint, dominated the market. Working closely with master printer George C. Miller, and after 1921, Bolton Brown, Bellows exploited new techniques to capture the texture of a drawing or the gestural markings of a sketch in his prints. Lithography allowed Bellows to draw an image directly onto the stone or to translate a sketch, such as Nude Study, to a print without losing the softness or delicacy of the line.

Nude Study was completed by Bellows during the summer of 1924 while he was working with Bolton Brown on a series of lithographs depicting the female nude.[2] Standing in a relaxed contrapposto position, the voluptuous contours of the model’s body are punctuated with dark crayon markings—following the curves of the cheekbone, neck, back, arm, and calf to evoke a sense of symmetry or balance. The folded drapery along the right leg offers a sense of stability to the composition and references a similar design strategy in Roman sculpture.  Bellows’s direct and uninhibited style struggles to reconcile a tension between the classical genre and his own modern gesture.

This drawing was donated to the Cooper Union Museum for the Arts of Decoration in 1958 by art dealer Martin Birnbaum, along with a pastel sketch by Albert Sterner. Birnbaum was a strong champion of American art in New York City and advocated that as part of Cooper Union Art School’s collection this drawing would inspire the next generation of artists and designers.