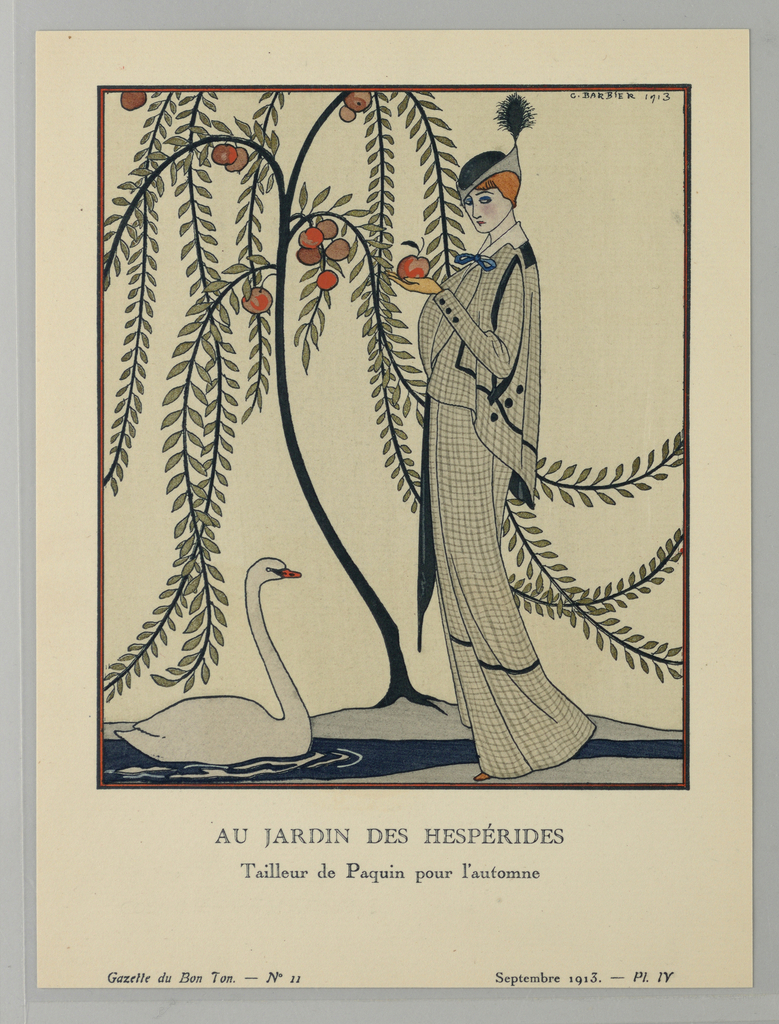 George Barbier’s Au Jardin des Hespérides (Garden of the Hesperides) appeared in 1913 in Gazette du Bon Ton. Translated as the “Journal for Good Taste,” it was intended for an elite readership concerned with high-society culture and entertainment, as well as the latest developments in fashion and beauty. The publication was led by the publishing visionary Lucien Vogel, who sought to position fashion as a natural extension of the fine arts and thus gave his illustrators complete freedom. Vogel possessed an exclusive contract with seven of the leading Parisian couture houses of the day, including Jeanne Paquin, whose autumn tailored suit is featured in this illustration.

Barbier incorporates several elements of Japanese Ukiyo-e woodblock prints, or “pictures of the floating world” which flourished from the 17th through the 19th centuries, including an asymmetrical composition, the elimination of volume and rules of perspective, and the dematerialization of the figure. Although the subtle curves and integration of natural and feminine imagery reflect the influence of Art Nouveau, the woman in this illustration possesses a new kind of modernity associated with the Art Deco movement. The female form appears streamlined and flattened, indicating the recent developments in fashion, such as the elimination of the corset as an S-shaping vehicle and the resulting liberation of the waist. In addition to minimizing her curves, Barbier shortens her hair to make her look slightly androgynous, freeing her from previous meanings associated with motherhood or domesticity.

The illustration references the Hesperides, a group of maidens in Greek mythology who guarded a highly sought-after tree bearing golden apples that was planted from branches that Gaia, the primal Mother Earth goddess, gave to Hera as a wedding present when she married Zeus. The golden apples on this tree in the Garden of the Hesperides granted immortality to anyone who consumed them and were thus guarded closely by both the Hesperides and Ladon, a hundred-headed dragon. According to the myth of the Judgment of Paris, an apple from the tree was given by Paris, the Prince of Troy, to Aphrodite, who promised to give him Helen, the most beautiful woman in the world, as his wife, thus triggering the events of the Trojan War.

Another intriguing mythological reference is suggested through the inclusion of the swan at the woman’s left. Although the woman in Barbier’s illustration initially seems to stand in for one of the Hesperides, guarding the golden apple tree, a closer viewing of the picture suggests a connection to the myth of Zeus and Leda. The myth tells the story of the beautiful woman Leda, whom Zeus aggressively pursued and impregnated with Helen of Troy. Departing from previous artistic depictions of Leda as nude and supine, Barbier’s exquisitely clothed woman towers above the swan with an enigmatic facial expression. She even takes on characteristics of the swan, replicating the bird’s colors and the form of his neck in her slender, subtly curving body. By challenging conventional artistic interpretations of the myth of Zeus and Leda, Barbier suggests the rise of a new kind of woman in the early twentieth century—a woman enjoying increased personal freedom. Taking a forbidden golden apple from the Garden of Hesperides, Barbier’s woman asserts herself as not simply an object of desire but an advocate for the pursuit of hedonistic pleasure.

← Wings Over America
Frozen in Time →