A Sunflower of a Different Color 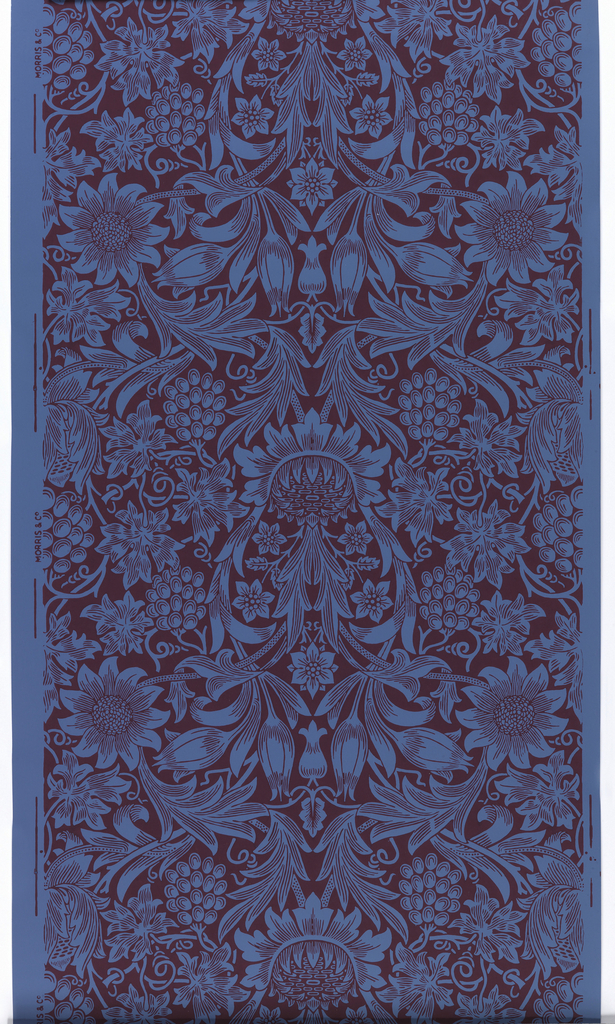 This wallpaper is a 1970s print of an 1879 design by William Morris, in a color combination he may have found shocking.

Morris is often regarded as one of the most outstanding and influential members of the Arts and Crafts Movement. He was a passionate admirer of medieval-gothic ornament and he also believed that every person had a right to a beautiful home. It was through this sentiment that he and a group of like-minded friends decided to create a decorating business. In 1861, Morris, Marshall, Faulkner & Co. was founded, providing beautiful, handcrafted products for the home. The motivation was to produce affordable ‘art for all’, as well as to revive the traditions of craftsmanship which, in Morris’ mind had been lost during the Industrial Revolution. Morris soon realized in order to be successful as an interior furnisher, he would need to develop patterned textiles which were suitable for walls, upholstery and window treatments. As a gifted artisan, he produced some of the most fashionable and exciting textiles and wall coverings of his time, and by 1875 his business became known as Morris & Co.

Morris was known for patterns ranging from small and delicate to large and bold, although he had a preference for the grander prints. Morris believed if large patterns were designed properly and colored correctly, they could be restful to the eye. Committed to truth and honesty in materials, he was opposed to synthetic dyes, and consulted various texts from the 18th and 19th centuries in hopes of strengthening his understanding of the dyeing process. From his studies, he concluded that all colors could be created from the three primary colors, plus brown, and determined that these four colors could be created from natural dyestuffs such as cochineal for red, indigo for blue, weld for yellow, and madder root for brown. The combination of these colors could produce secondary colors, as well as black. The use of the natural dyestuffs created some beautifully subdued color combinations, which became the signature of Morris’s work.

By the 1930s, natural dyes became more difficult to source and production methods moved toward mass production, resulting in inadequate product. In 1940, Morris & Co. went into voluntary liquidation, the company name, design archives, woodblocks and remaining wallpaper stock were purchased by another notable name in the furnishing industry, Arthur Sanderson & Sons. Sanderson continued to produce the still-popular designs in Morris’s colorways, but also introduced color combinations influenced by modern times. The analogous combination of turquoise blue and violet is in stark contrast to the more nature-driven hues of Morris’ work. This translation of Morris’ design is truly a sunflower of a different color.

Kara Nichols is a graduate student in the master’s program in the History of Design & Curatorial Studies offered jointly by Cooper Hewitt, Smithsonian Design Museum and Parsons School of Design. She served as the Curatorial Capstone Fellow for the exhibition Saturated: The Allure and Science of Color.