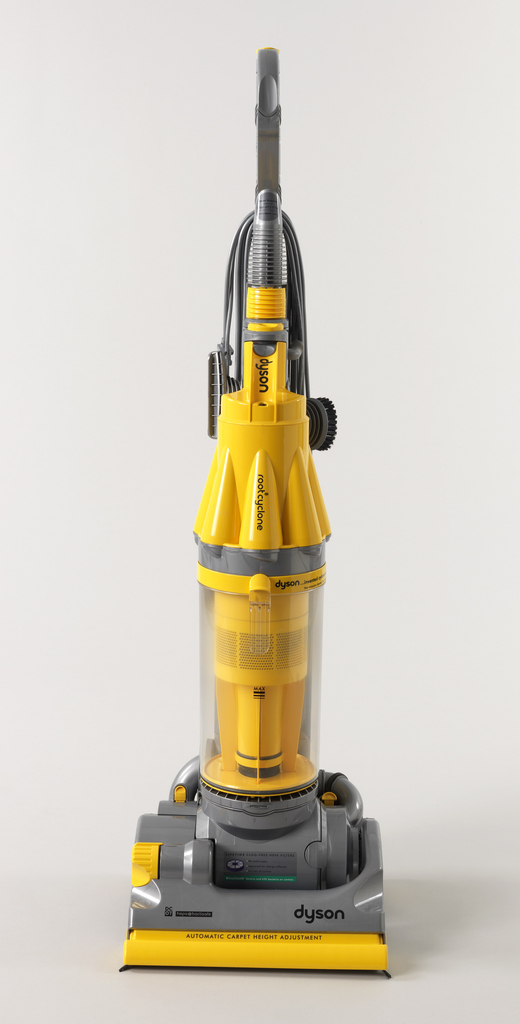 To celebrate the opening of Saturated: The Allure and Science of Color (May 11, 2018-January 13, 2019), Object of the Day this month will feature colorful objects from the exhibition. This post was originally published on May 1, 2013.

For many of us, a glance at everyday appliances elicits a wince or a groan: they’re dull looking, break easily and frequently, and never work quite as well as we’d like. Our lives are full of minor annoyances that we try, often unsuccessfully, to ignore. But when James Dyson is annoyed by an appliance, he doesn’t ignore it; he embraces it, seeing in a product’s shortcomings the opportunity to create something better, that will work (well), look cool, and surpass all similar devices.

At once a designer and a product, Dyson strives for perfection. The design for his first vacuum cleaner, the DC-01, which entered the UK market in 1993, came after creating more than five thousand prototypes. He meticulously changed one aspect at a time. The new design, meant to resemble NASA aircraft, with yellow added for “fun,” was more than mere surface design: it was a re-imagined, re-engineered dirt sucker-upper.

At the time Dyson began experimenting with vacuum cleaners, in the 1980s, the technology had remained largely the same since 1901. Although appearances changed, the cleaners still used bags with filters that began clogging after one use, housed bacteria and allergens, were clunky, and most collected only two-thirds of the dust. Dyson’s vacuum applied and adapted the centrifugal technology used in large industrial cyclone towers, to remove harmful particles from the air on a domestic scale; this technology allowed him to create a vacuum that extracted more dirt and dust from carpets and did not use a bag.

In 2002, after continued experimentation and improvement, and having sold nearly ten million vacuums already, Dyson entered the US market with the DC-07. Dyson declared in his autobiography, the DC-07 is “the best Dyson, and by definition the best vacuum cleaner, ever made.” He had divided the single cyclone into seven cyclones, increasing the machine’s power by 50 percent; he added a trigger-release bin to efficiently empty collected dust; lightened the vacuum to a mere four pounds; and added washable filters, among other changes to improve the vacuum’s efficiency and quality and to increase its lifespan.

Dyson moved into a market that perhaps was not appealing to many designers but had huge possibilities. He made an everyday, burdensome object sexy. But if his sheer popularity didn’t convince you, others were ready to tout his cause. During New York Fashion Week’s Spring 2003 show, designer Tara Subkoff asked Dyson for twenty-five DC-07s to accompany her topless models down the catwalk. Oh, and the queen—Elizabeth II herself—told Dyson, as she presented him with a C.B.E. (Commander of the British Empire) medal, “We’ve got dozens of them about the place.” The place, of course, being Buckingham Palace. The yellow-and-silver Dyson was officially cool enough for New York Fashion Week and classy enough for the queen.

Dyson sees the world in a way that is at once obvious and brilliant, and his method is simple: he encounters an everyday problem, and he resolves it.

This object is on view in Saturated: The Allure and Science of Color.

Rebecca McNamara, a graduate of the Masters program in the History of Decorative Arts at Cooper Hewitt, Smithsonian Design Museum/Parsons The New School for Design, is a historian and curator, specializing in 19th-century through contemporary American art, design, and material culture.

← A Sunflower of a Different Color
Macro Micro Marks →

One thought on “James Dyson: Designing Out Annoyances”

You have stopped sending these to me as of this week. How do I correct this????