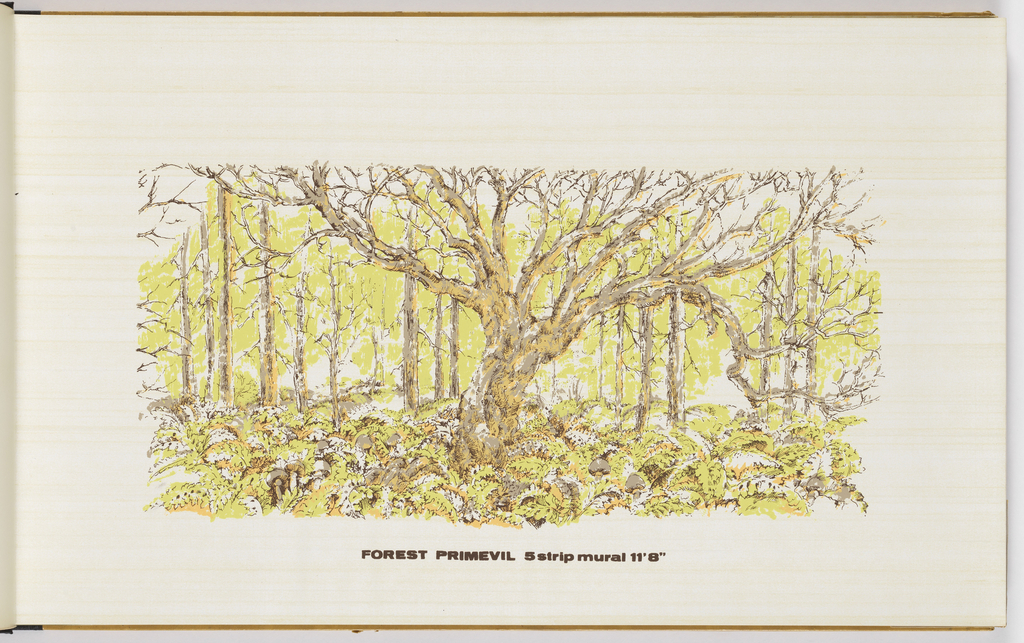 Posted by Gregory Herringshaw on February 3, 2018

Labyrinth is from a collection of murals ranging from traditional ruins and landscapes to more modern styles, or should I say mod? I love all the different wall surfaces, each decorated with a different pattern, and the circular cutouts that really open up the design. This page from the book is a miniature of the actual mural, but is printed in the same silk screen technique. The full-size mural measures eleven feet eight inches so would occupy the majority of the wall. This mural was available in three colorways, along with the shades of blue on a white ground it could also be purchased in bright yellow and green on a tan ground, and orange and brown on a mock canvas ground. The background color could be purchased as separate rolls to cover the remainder of the wall, or to cover the three adjoining walls.

Murals became fashionable in the 1950s and remained so for some time. Taking their inspiration from scenic wallpapers popular during the first half of the nineteenth century, murals were usually designed to create a focal point on one wall, and most could not be used with multiple sets to continue the pattern around the room. The designer of this paper stated murals were in vogue at this time as they were seen as a way to open up the living spaces of ranch-style homes. The deep perspective on this design definitely draws your eye into its far recesses and would visually enlarge a room.

Raphael Kalkstein began designing wallpaper in the late 1950s and specialized in mural designs. He was especially fond of romantic views, more apparent in a number of his other murals, and was influenced by the Rococo style, Piranesi, and architectural drawings. He continued designing wallpapers and murals until about 1980.

← For a Child in the Adult Style
Leaving His Mark →