For a Child in the Adult Style 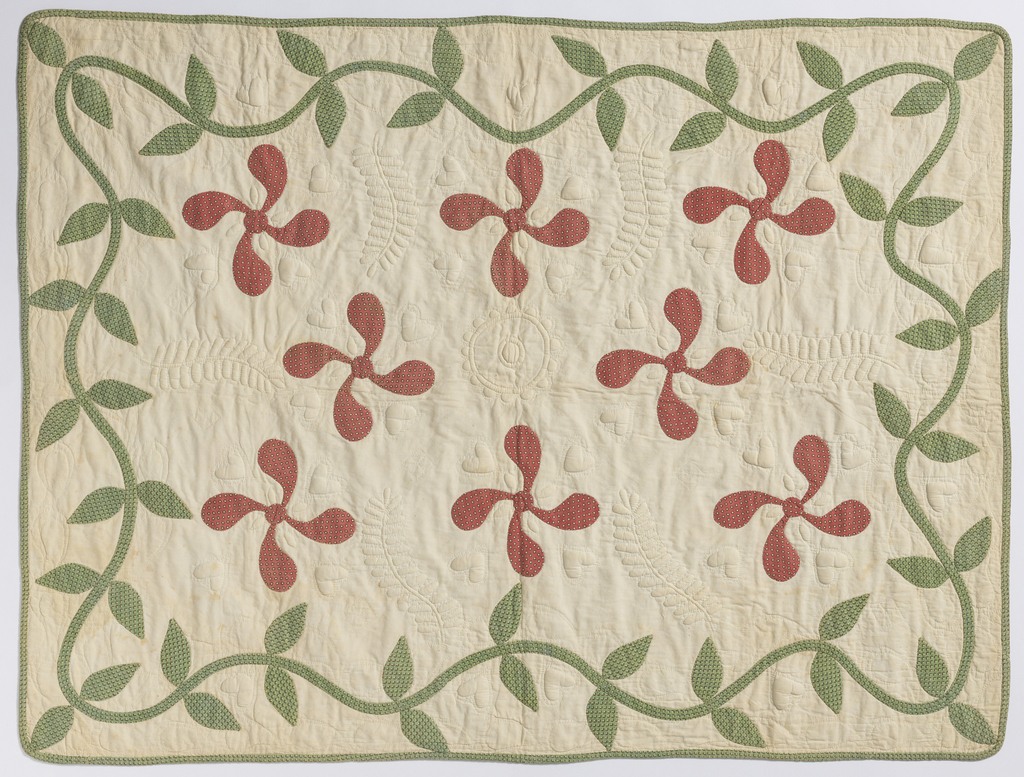 Many surviving nineteenth-century crib quilts are evidence that it was more common to make a child-size quilt in colors and patterns that were popular for adult-size bed quilts, rather than in specific “baby” colors. An 1840-1860 crib quilt in the collection of Cooper Hewitt, Smithsonian Design Museum represents common coloration and a style of quilting that is still prized today for its naturalistic motifs and intricate technique, and as a representation of the development of a distinct American style during the mid-nineteenth century. Executed in a pieced and appliquéd “Trailing Vine” pattern surrounding appliquéd floral medallions in the center, only two small-scale printed cottons were used for the designs. Heavily padded trapunto hearts and ferns decorate the off-white cotton ground of the quilt, making the background almost as much of a focus as the appliquéd design that decorates the bedcover.

Katie Wood Kirchhoff, a quilt specialist and associate curator at Shelburne Museum in Vermont, asserts that many nineteenth-century quilts executed in red and green cotton fabrics can be dated to 1840-1860. [1] The abundance of available textiles in those colors and the popularity of the color combination led to quilters turning to that color scheme quite a lot at mid-century. In the Shelburne Museum’s collection are many quilts that support Kirchhoff’s theory. Those examples share similarities not only in color but in the similar fabrics used for the designs, type of vine and leaf forms, and trapunto grounds on which the designs are appliquéd. In any red and green mid-19th century quilt like Cooper Hewitt’s example and those in the Shelburne’s collection, it is quite possible that they were once a brighter red than they are now. “The dyestuff used, developed in the 1830s and known as ‘Turkey Red,’ was popular with mid-19th century quilters because it did not bleed or fade, dependably retaining its vibrant, colorfast hue. Turkey reds do, however, have a distinctive pattern of wear” [2] which causes the color to read as more pink than red today.

This rare quilt was donated to Cooper Hewitt in 1962 by D. Lorraine Yerkes (1899-1977), a Chicago based interior decorator and wallpaper designer. Yerkes was a “founding member of the American Institute of Decorators, which still exists today as the American Society of Interior Designers. She ran her shop in Chicago from about 1926 to 1943, and for a time afterwards headed the home furnishings department of Goldblatt Brothers, Inc. After WWII, Miss Yerkes collaborated with New York City decorator Richard E. Thibaut, contributing to what The New York Times called the ‘first full line of wallpapers since the war.’” [3] Objects donated by Miss Yerkes are in the collections of Cooper Hewitt, the Metropolitan Museum of Art, and the Art Institute of Chicago. Miss Yerkes was also a “diligent collector of American onomastica” (the branch of lexicology that studies the forms and origins of proper names), according to H.L. Mencken, who credited her for putting “together a collection on cards, mainly gathered from newspapers and telephone directories, that runs to many thousands of examples” in his book, The American Language Supplement 2: An Inquiry into the Development of English in the United States.