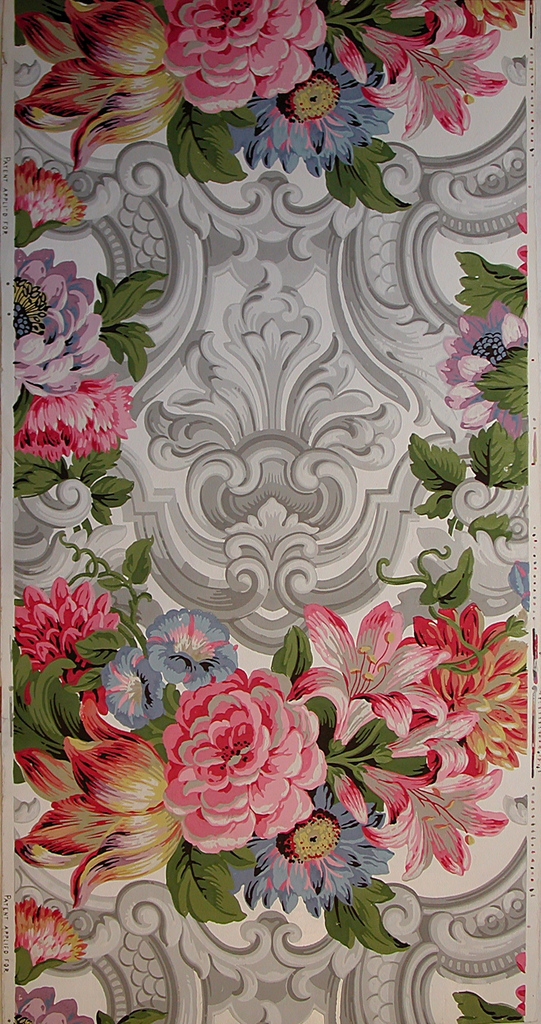 This sidewall was donated to the Cooper Hewitt by D. Lorraine Yerkes in 1941, along with several dozen other antique and contemporary wallpapers from her collection. Ms. Yerkes was an independent decorator, and founding member of the American Institute of Decorators, which still exists today as the American Society of Interior Designers. She ran her shop in Chicago, c. 1926 – 1943, and for a time afterwards headed the home furnishings department of Goldblatt Brothers, Inc. After WWII Ms. Yerkes collaborated with New York City decorator Richard E. Thibaut, contributing to what the New York Times called the “first full line of wallpapers since [the] war.”

The design was block-printed on a gray ground with over a dozen different colors. Symmetrical grisaille scrollwork with scales and acanthus detailing is overlaid with lush garlands of pink, purple and blue flowers. The scrollwork features scales and acanthus-leaf detailing, and is inspired by seventeenth-century masonry. Based on the colors used, this sidewall most likely dates to the first half of the twentieth century, but the large-scale, Renaissance-revival pattern would have been the height of fashion in the 1860s and 1870s. While Victorian-revival wallpapers are certainly not what Ms. Yerkes was best known for, she may have had good reason for seeking out this pattern from such a specific moment in time. In 1941 she purchased a Victorian home in the Illinois countryside and turned it into the “Horse & Buggy Inn.” The home was built c. 1860 by Dr. C.C. Miller, also known as “the king of beedom.” Presumably, the good doctor really loved bees. At any rate, it is known that Ms. Yerkes put a reproduction of the gothic-style wallpaper from Theodore Roosevelt’s New York City home in the hallway of her new venture, so perhaps this Renaissance-inspired floral might have graced another room at the Horse & Buggy Inn.