Behind Closed Doors: How Royalty Lived in Nineteenth-Century Paris 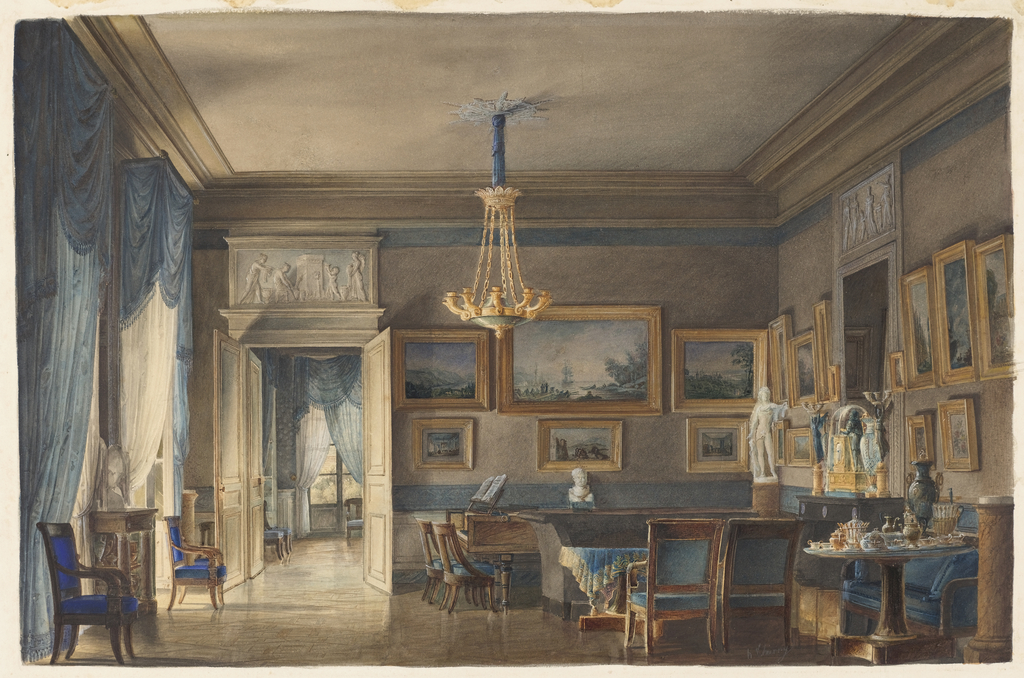 The fashion for commissioning watercolors after existing interiors was a feature of aristocratic life in the 19th century. This trend was popularized by Queen Victoria, who commissioned artists and architects to execute watercolor portraits of the rooms in all of her palaces and, wherever she traveled, hired artists to create watercolors of the places she visited, especially the palaces and the rooms that she inhabited. Ever the model for the typical Victorian married couple, she and her husband, Prince Albert, would spend quiet, intimate evenings together reminiscing over the watercolors, which she kept in individual albums. Victoria was also in the habit of having duplicate drawings made to give to her children or her friends as gifts. During this era, on the Continent, interest in interior decoration, social fashion, and the proper drawing education of young upper class women, encouraged the practice of making interior portraits by both professionals and amateurs.

Hilaire Thierry’s interior most likely documents a room in a French royal palace, perhaps the Château de Saint-Cloud. In this elegant interior, afternoon light filters through two floor-to-ceiling windows, highlighting various decorative objects such as the gilded tea service, the rock crystal vases, and the hanging chandelier, all of which date back to the Napoleonic period. The chairs and canapé, however, are in the later style of Bourbon Restoration after 1814.

Hilaire Thierry (active 1815-25) worked for an aristocratic, royal, and royalist clientele close to the Bourbon family, including the Duc and Duchesse de Berry. As members of the royal family, the Duc and Duchesse had an apartment at Saint-Cloud for their use when Louis XVIII was in residence. After the assassination of the Duc in February of 1820, the Duchesse, aged 22 and expecting a child, was given the former apartment of the Empress Marie-Louise at Saint-Cloud for her use. Salon in the Restoration Taste may portray a room in the Duchesse’s Saint-Cloud apartment, and would appear to have been commissioned by her or by someone in her entourage.

← The Hounds of Bennington
Is there a Gothic Cottage in your Future? →