Behind the Scenes at Victoria’s House 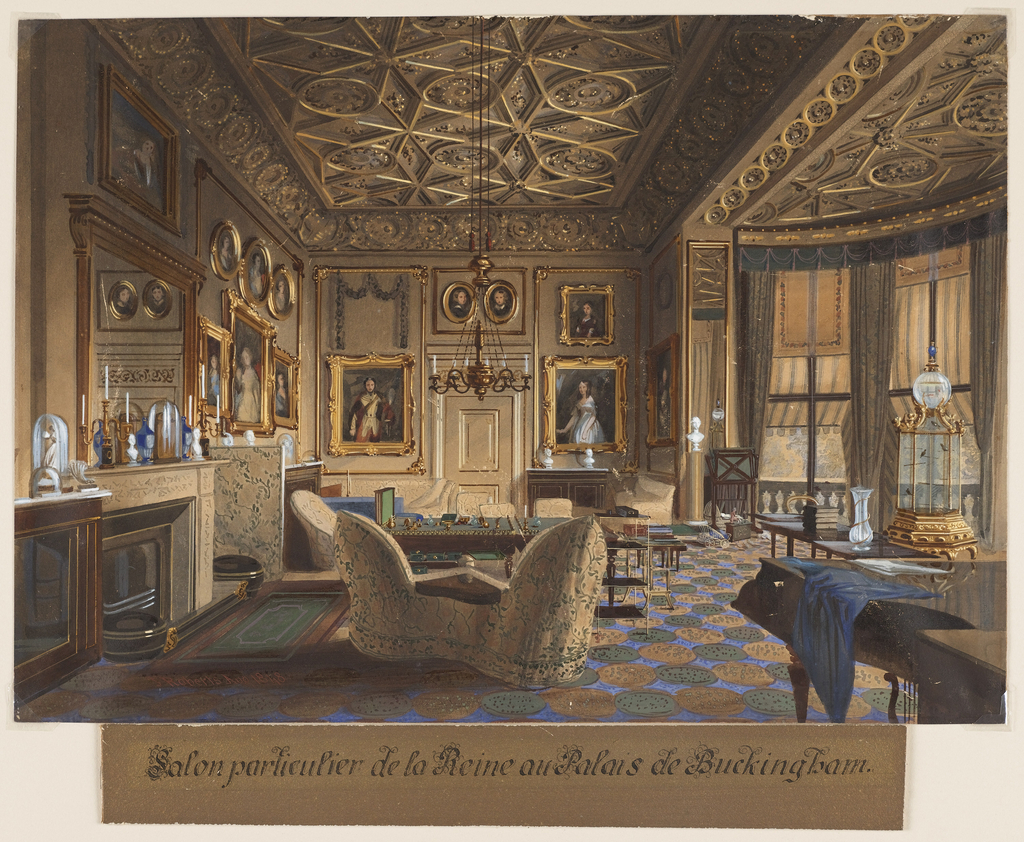 The second decade of the twenty-first century appears to mark an “unofficial” Jubilee for Queen Victoria.  Today’s films, television and literature feature her biographical, political, and romantic exploits in engaging reenactments.  Not to be outdone, Cooper Hewitt has its own collection of objects associated with the Queen, in part due to the generosity of Eugene V. Thaw and his wife Clare E. Thaw.   Among the group of eighty-six nineteenth-century watercolor interiors gifted by the Thaws to Cooper Hewitt’s collection in 2007, is a charming watercolor and gouache drawing, The Queen’s Sitting Room at Buckingham Palace, 1848 by James Roberts.   The room contains a cozy assortment of furnishings including an English-style tête-a- tête love seat in the foreground, paired desks for the Queen and Prince Albert, paintings, sculpture, objects and entertainments that convey the informality of private family life.  Roberts’ watercolor is one of many such interiors commissioned by Queen Victoria of rooms in her palaces and others that she visited on the Continent.  She arranged her watercolors chronologically in Souvenir albums and she and the Prince Consort would spend evenings reminiscing over the drawings, reliving the events that occurred in these interiors during the years of her reign.

We know from Victoria’s letter of February 10, 1845 to her Prime Minister, Sir Robert Peel that the Queen pleaded for the renovation of Buckingham’s private quarters to house her growing family and to entertain close friends.  The architect Edward Blore was commissioned to refurbish the rooms over the course of two years from 1846-1848.  An August 1848 inscription on the Thaw drawing suggests that it commemorates the conclusion of this room’s renovation.

Like many nineteenth-century watercolor interiors, Cooper Hewitt’s Sitting Room has a duplicate also dated 1848 in the Royal collection at Windsor Castle. Generally, these duplicates were commissioned to give to friends who spent time in the rooms or for family members as mementos of palace interiors. [2]  To make matters more confusing, there is a third version of Roberts’ Sitting Room, in the Royal collection, slightly smaller in size, which is not by Roberts’ hand, that duplicates the Roberts drawing at Windsor. [3] With a few exceptions, the furniture and objets are in the same positions in the Cooper Hewitt and the two Windsor drawings, including the children’s toys on the floor in the bay below the print rack.  With Victoria’s interest in promoting the domestic life of the Royal family, the inclusion of the playthings in the sitting room views has a special relevance.

In 1848, when the Cooper Hewitt drawing was made, Victoria and Albert would have had five of their nine children.   The picture of a young child in the oval frame on the rear wall, in the Royal Collection’s two versions, has been identified as Franz Xaver Winterhalter’s painting of Prince Arthur who was born in 1850.   It would appear then, that the painting of Arthur was most likely added to the Roberts’ Windsor watercolor after it had been completed in 1848 and the copy of the Windsor watercolor probably dates around 1852.

← Dreaming with Don Quixote
In Service to the King →

One thought on “Behind the Scenes at Victoria’s House”