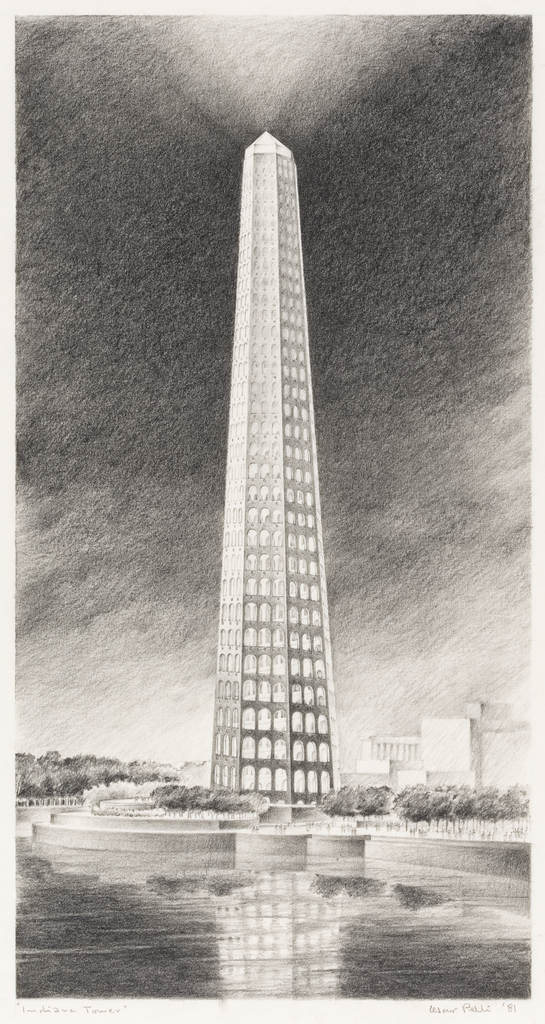 In addition to creating models, architects often think through the planning stages of a building’s design by producing detailed, hyper-realistic drawings. While they may lack technical notations denoting dimensions or materials, these drawings provide an overall sense of the future building’s design. This 1981 charcoal and graphite rendering by Argentine-born architect Cesar Pelli depicts the unrealized Indiana Tower. A 750-foot-tall monument envisioned for Indianapolis, the tower was to rival nearby St. Louis’s Gateway Arch, designed by Finnish-American architect Eero Saarinen, and completed in 1965.[1]

The obelisk-like spire, to be constructed of concrete and limestone, was intended to be the focal point of White River State Park. Reminiscent of the Washington Monument—but pierced throughout with windows—the tower would have provided a spiral walkway spanning its length, offering panoramic views of the Indiana plains.[2]

On the importance of the planned monument, Pelli stated, “Like the Eiffel Tower in Europe, it will be the thing you must see. It will be known as well in Moscow as it is in Singapore.”[3] His sketch reflects these aspirations, depicting the tower jetting far above nearby buildings, its pyramidal crown projecting mirrored light into the sky above.

In this early planning stage, Pelli asserted, “At this moment it is only a hope and a dream. There is nothing tangible to defend. It is like any great enterprise or dream; it is very vulnerable at this stage of conception.”[4] Pelli’s characterization was correct, and negative critiques of the tower ultimately led to the project’s downfall. Residents and fellow architects viewed the monument as too tall and expensive, and likened its appearance to that of a corncob. Locals were unsupportive of a structure that would loom higher than the city’s tallest buildings, especially in the flat landscape of Indiana.

This unrealized project brings to mind the controversies that often surround public monuments, which must reflect the identities and expectations of a diverse population. Residents become invested in the success of these structures as both symbols of the region, and as worthwhile and efficient uses of public funds. Perhaps the most famous recent example in the U.S. of such a controversy is the one in response to Maya Lin’s Vietnam Veterans Memorial in Washington, D.C. Completed in 1982, the design was vociferously disparaged by critics for its lack of figurative representation and narrative.[5]

Another potential parallel lies in the imaginative designs of Buckminster Fuller for buildings of the future. One such design in Cooper Hewitt’s collection depicts the Ten-Deck House, a utopian – and somewhat fantastical – solution to low-cost housing. Like Fuller’s 1928 print, Pelli’s sketch remains in the stage of productive imagining, never to be fully realized.

Maeve Coudrelle is a Curatorial Assistant in Latino Design. This post is elaborated from an entry in “Looking for Design,” a series exploring work by Black and Latinx designers in the collections of Cooper Hewitt and the National Museum of African American History and Culture.

[1] Saarinen was also an industrial designer, and several pieces of his furniture are in the Cooper Hewitt collection.

One thought on “Indiana Tower: An Unrealized Monument”

We should note that today the Vietnam Veterans Memorial is beloved by all who come to visit. The simplicity is its strength.

Sometimes one side of the controversy is wrong; the figurative designs close by are a poor shadow of the transcendent monument by Maya Lin. Thank goodness the powers-that-be saw the wisdom in what she had done, and were undeterred by the naysayers.