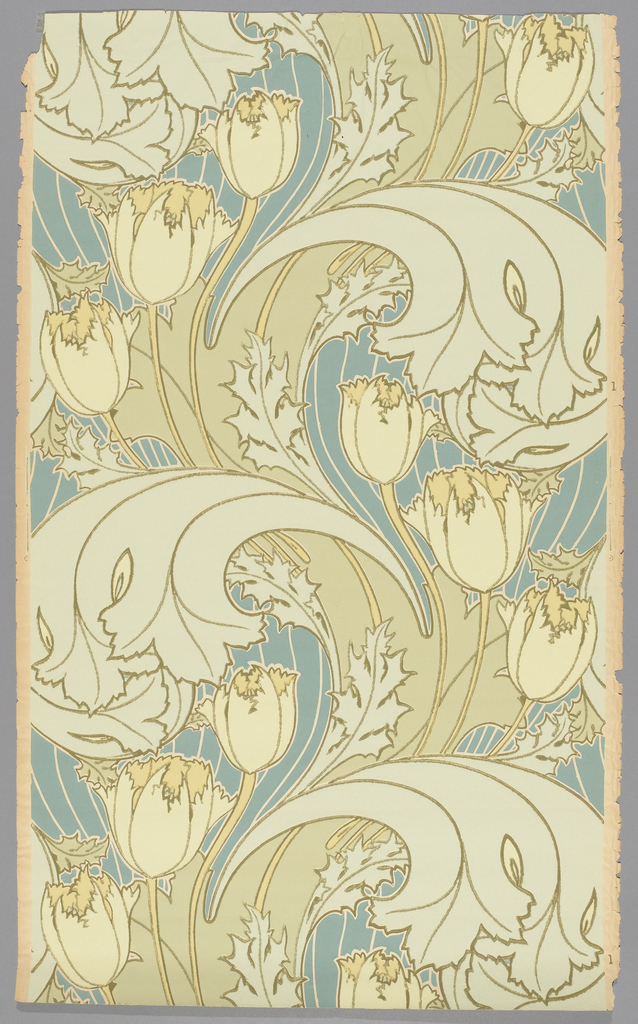 Stylized tulips and acanthus leaves flow skywards through this sidewall from the early eighteen nineties as though they are caught in a fast running stream. Their dynamic movement captures the eye and draws it along the sinuous curves of lithe stems and broad fronds that weave their way across the paper. Such a design is deeply rooted in both the Rococo and Art Nouveau styles that enraptured artists and consumers of the time. The Rococo style originated in France at the court of Louis XV and was popular from about 1730 until 1765 and is associated with his mistress Madame de Pompadour. In its height the style placed emphasis on natural or organic forms and attempted to distance itself from classical geometric designs by using curved lines. Between 1880 and 1915, the period during which this wallpaper was produced, Rococo was in a revival period that in turn influenced the contemporary style movement of Art Nouveau.

Art Nouveau, the predecessor to modernism, was a style that also placed emphasis on natural forms and curved lines but it was also concerned with breaking artistic tradition. Artists of the movement endeavored to abolish the hierarchy within art and unite the so call “fine arts”, such as painting and sculpture, with the decorative arts which had been thought of as lesser. Other influences on the style of Art Nouveau were botanical and organism studies, the Arts and Crafts Movement, and elements of Japanese art. Each of these influences are very present in this particular paper as the tulips and acanthus are very biologically accurate, lending themselves to these botanical studies. The Arts and Crafts movement was concerned with quality handicrafts and a truth to materials logic. Even at this late date Tulip was still hand printed using carved woodblocks. Elements of Japanese art are present in the wide swathes of color and in the flat stylization of the leaves that litter the paper.