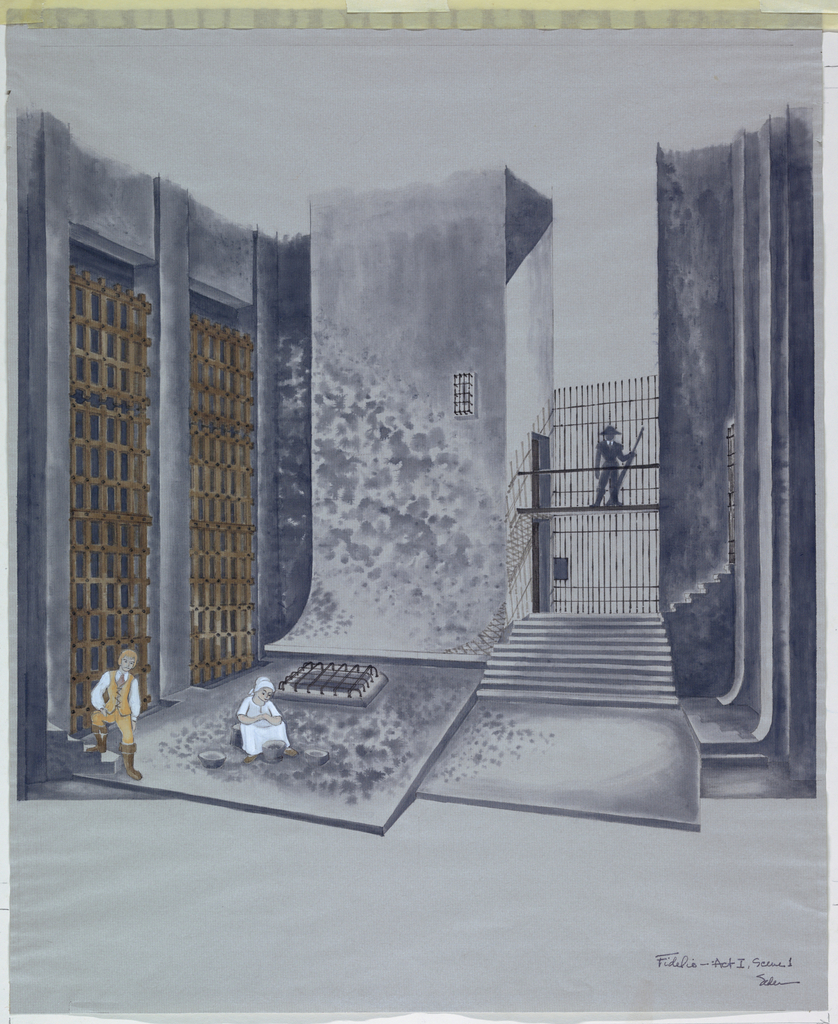 Stage designs occupy a unique place among Cooper Hewitt’s diverse holdings of works on paper. Unlike architectural fantasies or unrealized buildings, the intentional ephemerality of theater designs means that set designs, photographs, and models are often the only artifacts that remain to document these temporary spaces. The museum’s collection of stage designs spans the 17th to the 20th centuries, with a particularly rich group of 18th-century Italian drawings characterized by realistic architectural scenes. This drawing by Eldon Elder presents a contrasting example of 20th-century American stage design and demonstrates the museum’s continued commitment to collecting designs for theater.

Eldon Elder was a prolific scenographer. After receiving his MFA from Yale University, he spent a 50-year career designing hundreds of plays for productions on and off Broadway as well as in regional and European theaters. [1] In New York, his most enduring design is perhaps Central Park’s Delacorte Theater, home to Shakespeare in the Park.[2] Elder’s design process included drawing sketches, building models, and preparing finished drawings such as this one used for fabrication. This drawing illustrates the prison courtyard for the opening scene of Fidelio, Beethoven’s only opera, from its 1971 production at Walt Whitman Hall in Brooklyn, New York. Incorporating abstract geometric shapes to convey walls, space, and texture, Elder conveys colossal prison architecture with a few simple elements. The stairs, sloped ground, and tall prison gates further emphasize the smallness of the actors in the foreground. The shadow of the prison guard standing at the gate adds interest to the scene—this mysterious background figure represents the opera’s title character, Fidelio, who is actually the woman Leonore disguised as a guard in order to rescue her husband from death in a political prison.

Though Elder’s design relies on abstract geometries, his style varied widely in order to suit the particularities of the project at hand, and other of his designs employ more traditional architectural forms. Elder wrote and taught widely on set design and stressed the importance of learning from European models in order to inform the course of the relatively new discipline of modern American scenography.[3]

← Ancient Ruins Made Modern
Cross-Cultural Ornamentation: A Pair of Side Tables →