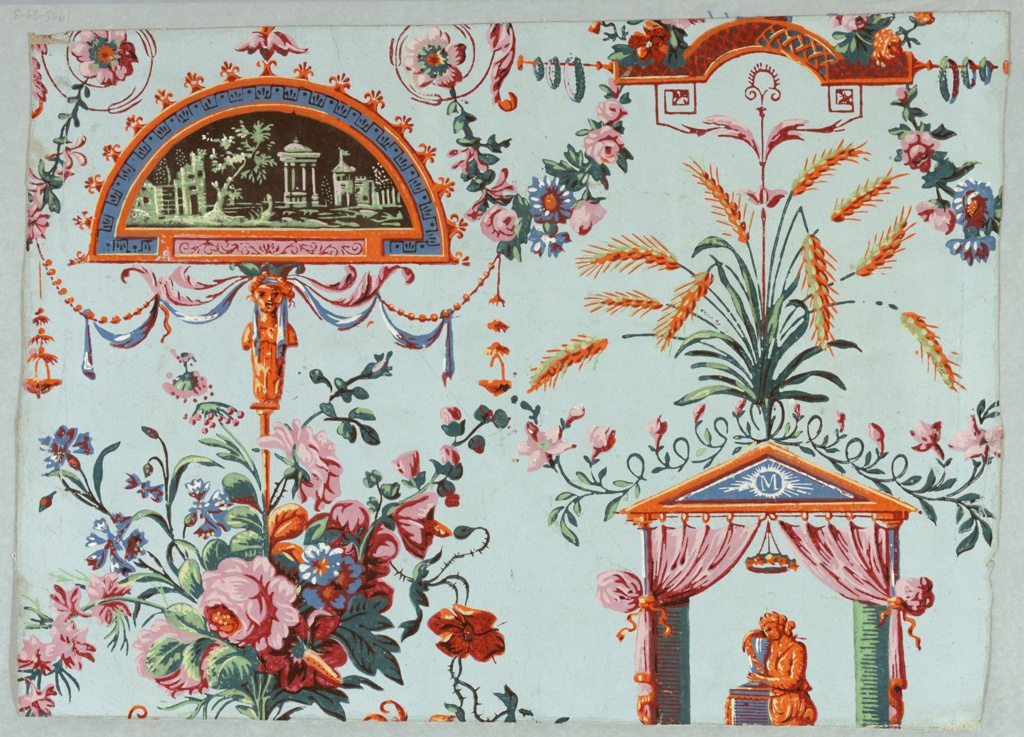 Wallpaper production was dominated by French manufactures in the 18th and 19th centuries, a time period which is often regarded as the “golden age” of wallpaper. The quality of design and material, as well as the quantity of paper created aptly distinguishes this period. Starting around the mid-18th century, French manufactures and designers were able to fully establish their industry during the stint of the Seven Years War. This reduced the amount of wallpaper importation from other European countries, most prominently Britain, who had a handle on the market due to advanced production techniques. Having this lull allowed the French to experiment and perfect their own methods. Manufacturing of wallpaper became most prominent in both the Paris and Lyons regions of France.

At the turn of the 19th century, there was a rise in the wealth of the middle class that influenced a trend of specific types of wallpaper to be placed in certain areas of the home. For example, this particular paper is a great example of a design that would have gone in a bedroom or a sitting room due to its cheerful but academically simple decoration. On its pale blue background are sprawling, lithe flowers, classical statuary, and Romanesque architectural ornaments that create a light atmosphere mimicking an idyllic garden. The flowers and plants are rendered in a naturalistic manner and are most likely types that would have been easily recognized by the contemporary consumer. To draw attention to the other elements, the foliage gently springs up and weaves its way around the repeat. Both the sculptural and architectural ornamentation within the repeat are classical in nature, evoking the ancient ruins of both Greece and Rome. Some of this ornamentation may have been inspired by engravings created as far back as the early renaissance.