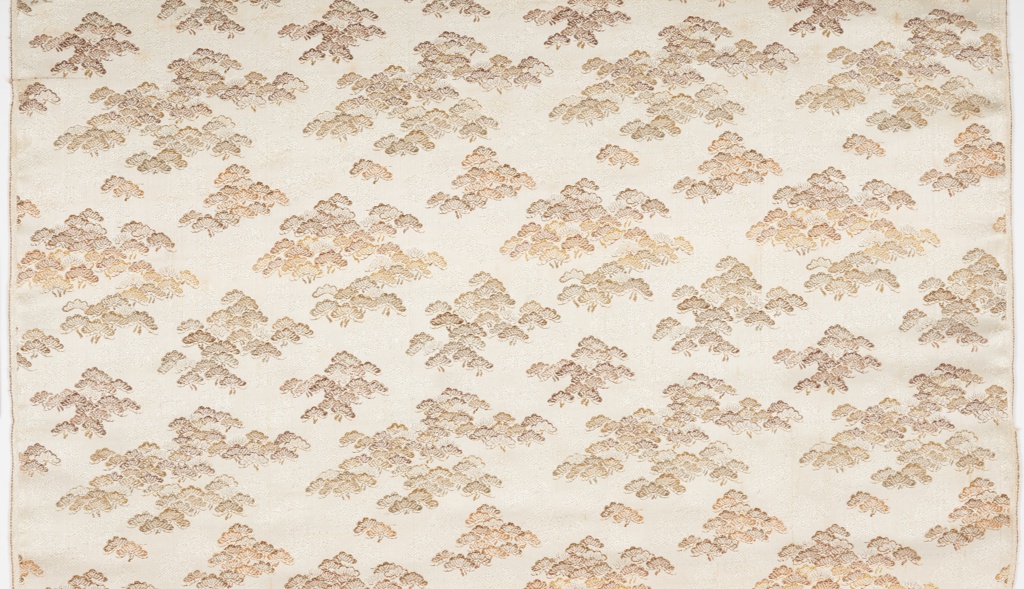 This Japanese fabric was produced for a maru obi, the most formal of obi for women. Maru obi cloth is typically woven in widths of twenty-five to twenty-six inches—about double the width of more casual styles of obi. The cloth is folded around a stiff lining and stitched together along the selvedges. It is bulky, difficult to handle and heavy to wear, which reserves it for only the most formal of dress.

Patterned by small clusters of pine trees, this obi fabric illustrates popularity of small-scale motifs in the late nineteenth century. The vogue for small woven patterns came after a group of Kyoto weavers were dispatched to study weaving technology in Lyon, France during the 1870s. They returned to Kyoto with the jacquard loom, fly shuttle, synthetic dyes and swatches of European woven and printed fabric. They were especially influenced by the small patterns made possible by European weaving and roller printing technologies. This style of woven cloth is known as nishiki, which can refer to a multicolored woven silk fabric; a stricter definition of nishiki is a jacquard woven fabric that is primarily patterned with supplementary weft bound by supplementary warp in a warp-faced twill ground. The continuous supplementary weft in this fabric produces the raised motifs that are clusters of pine trees or matsu that represent longevity and good fortune in Japanese culture. Initially, weavers used the new loom technology mainly to create fresh patterns for the obi, especially the maru obi. Popular at the end of the nineteenth century, this wide obi was subject to the whims of fashion as new patterns and colors provided a more economical way to update the always more expensive kimono.