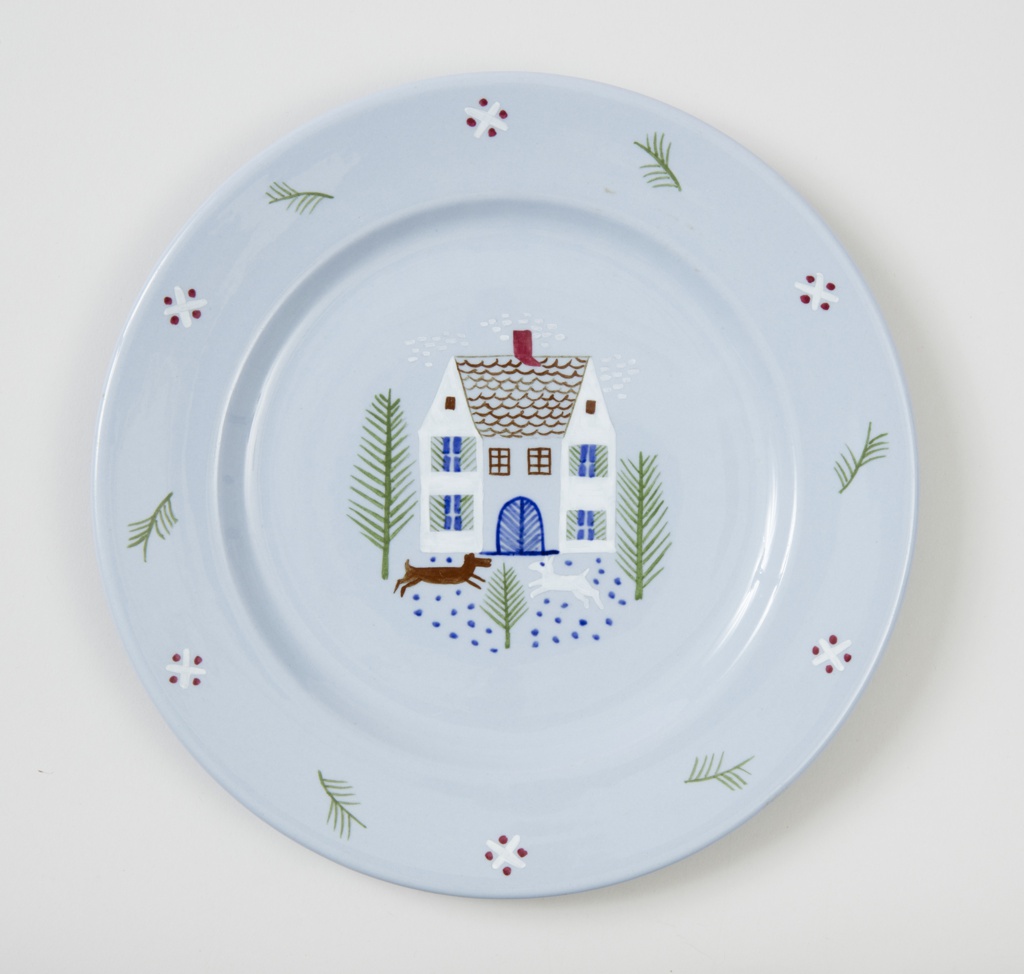 Ilonka Karasz decorated this Buffalo China plate in about 1935, during the time that she worked as a designer for the company.[1] Founded by The Larkin Company, a soap factory, in 1901, Buffalo China produced soap dishes and other ceramics that were offered as premiums for purchasers of soap. The Larkin Company’s desirable premiums (including furniture, glass- and silverware, apparel, tea, coffee, chocolates and more) led to its extraordinary success, measured by annual sales of $28 million in 1920.[2] The company’s headquarters in Buffalo, NY, was designed in 1903 by Frank Lloyd Wright (and demolished in 1950 after the company’s demise).[3] The years 1922-23 represented the last time Buffalo China appeared in Larkin’s premium catalogue. Thereafter, Buffalo China manufactured ceramic tableware for use by hotels, rail lines, airlines, and steamships, much of which was custom-made for each client by the company’s large art department.[4]

This earthenware plate, one of two by Karasz in Cooper Hewitt’s collection, is in Buffalo China’s Lune Ware (blue) glaze. It features a central scene of two running dogs in front of a house. Around the rim are leaves and cross-hatched decorations. The designs, that mimic hand-painting, contrast with those that Karasz also designed for Buffalo China for use on railroads, including Pennsylvania Railroad. Contrary to the usually very standardized designs—e.g., repeated geometric shapes— and solid colors employed on Buffalo China pieces for institutional use, Karasz’s decoration and color choice for these plates is significantly more whimsical, suggesting that the line was perhaps developed for a more modern-minded audience. Their folkloric design would have appealed to the American customer in the mid- to late-1930s.

Following its very recent acquisition, the plate is currently on view at Cooper Hewitt in the exhibition Ilonka Karasz, Works from the Collection, which features work by Karasz in a variety of media—silver, wallcoverings, textiles, illustrations, and prints.

[2] Howard R. Stanger, “From Factory to Family: The Creation of a Corporate Culture,” Harvard Business School,

[3] “A Brief History of the Larkin Company,” The Larkin Collection, accessed September 1, 2017, http://www.monroefordham.org/Projects/Larkin/history.htm.