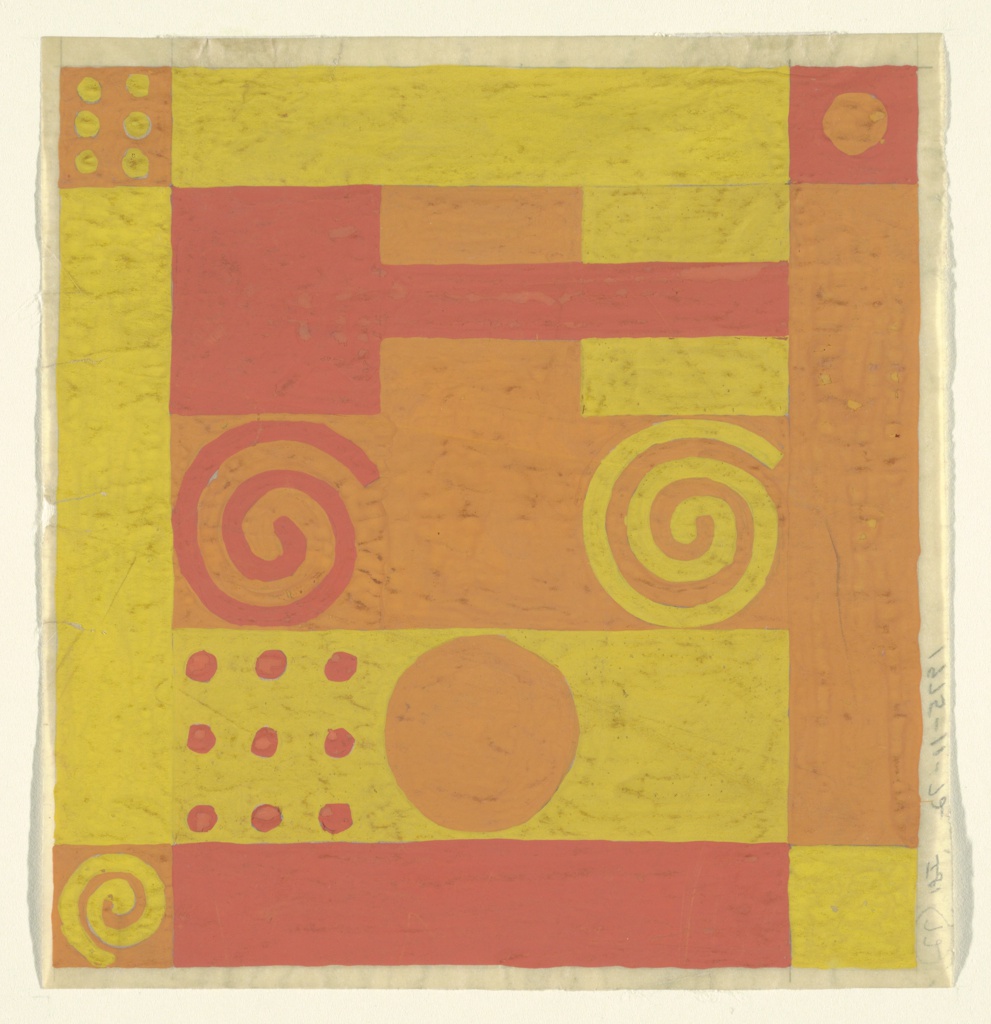 From the time she arrived in the United States from Budapest in 1913, Ilonka Karasz was a force in New York City’s creative circles. Karasz’s oeuvre is diverse; over the course of her sixty-year career, she created furniture, textiles, silver, wallpapers, ceramics, and illustrations. Between 1925 and 1973, Karasz illustrated 186 covers for the New Yorker, including the 1939 World’s Fair edition in Cooper Hewitt’s collection.[1] Today, Karasz is widely known for the mid-century wallpapers that were produced by the New York firm, Katzenbach and Warren; however, Karasz’s early design work reveals a modernist aesthetic that is often overlooked.

In the 1920s and 30s, Ilonka Karasz’s experimentation with a variety of media was applauded by contemporary publications like House and Garden, but it was her unique textiles that seemed to garner the most acclaim. Karasz used various materials; she designed patterns for jacquard woven textiles as well as linen and rayon materials for F. Schumacher and Company’s Airplane and Motor Division in 1929, and  Karasz was one of the few women to design textiles for planes and cars, the symbols of modernity in the post-war period.[2] In 1929, House Beautiful wrote about Karasz’s textile designs, “From printed mohair to the woven materials produced on intricate Jacquard looms, and back again to straightforward oilcloth, Miss Karasz is designing with such a success that can be measured by both the practical terms of the manufacturer and the strict demands of good art.”[3]

In the 1930s, Karasz became interested in the interiors of nurseries and in 1935 she designed six children’s rooms for an exhibition at Saks Fifth Avenue. Moreover, Karasz contributed an article about the psychology of nursery design for the October 1935 issue of House and Garden. This bright orange and yellow carpet design drawing in the Cooper Hewitt’s collection demonstrates many of Karasz’s requirements for children’s designs. The solid blocks of color are combined with circles and swirls of varying sizes. The design recalls the geometric paintings of Piet Mondrian and reveals Karasz’s interest in abstraction and color. Ilonka Karasz’s writings and designs demonstrate her advocacy of radical Modernist ideals and her status in the canon of American design. In Karasz’s House and Garden article she discusses the importance of geometry and innovation in a child’s environment, “As children always do, he will imagine these cubes to be not only boxes but will relate them to things in Nature and the world around him…he will discover that in reality all things in Nature are built up of such units, that trees, flowers, animals and even people are related to such forms…through new theories of design, production and distribution, [these rooms] have more vision than the manufacturer who still insists upon Little Bo-Peep.”[4]

This drawing is included in the exhibition Ilonka Karasz, Works from the Collection on view at Cooper Hewitt, Smithsonian Design Museum from October 14, 2017 to May 28, 2018.