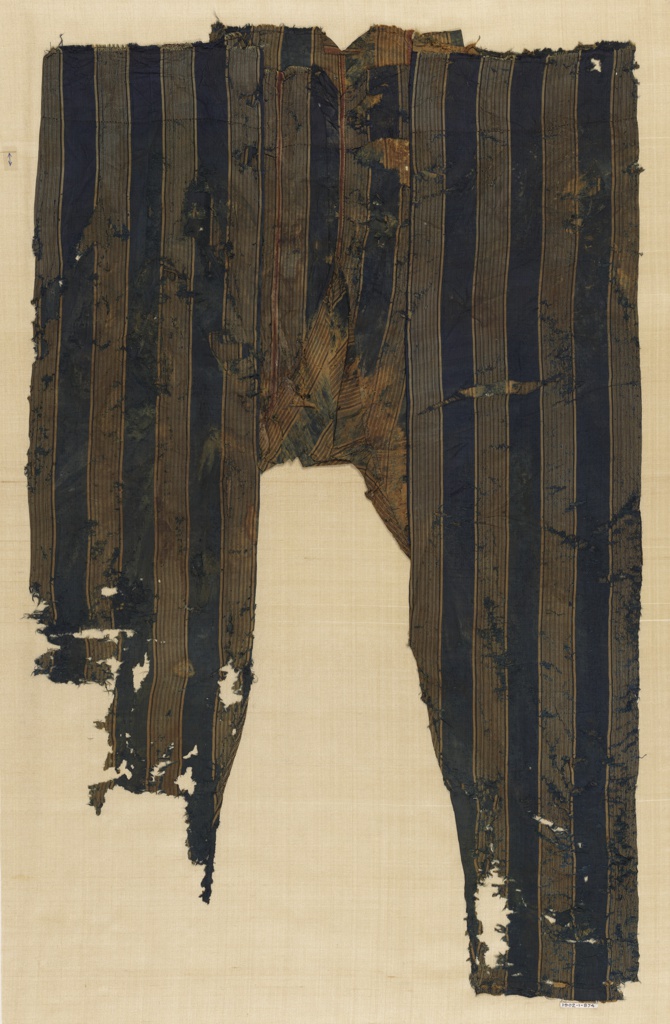 Posted by Kimberly Randall on September 9, 2017

Striped pants are cool. I saw a woman in the subway the other day wearing a beautiful pair—white with very narrow but uneven dark blue stripes. I almost went up to tell her how great they were. (It helped that she was wearing a great pair of shoes, too.) A good pair of striped pants makes a statement.

The Mamluks were into stripes. Hats, cloaks, pants. Striped garments distinguished them from their neighbors. They even built striped architecture—ablaq—using alternating bands of black and white stones. They were great weavers and there are many categories of striped textiles found in Egypt and Syria—the terrain of Mamluk rule (1250-1517). Mostly made of silk, (though sometimes of cotton or linen) there are stripes woven in warp-faced plainweave, as well as stripes composed of double- and even triple-cloth– complex weaves which may have been woven on draw looms that had been introduced to the region around that time. Some have inscriptions woven within narrow stripes and were used as part of religious or ceremonial events. Others have small animals and scroll work, or stars and flowers inscribed within vertical bands. One group of red and green colored striped garments (sometimes with gold thread) excavated in Egypt, fragments of which are preserved in several museum collections, have patterning composed of floating warps that make small geometric designs, that may have been influenced by Chinese silks from the period. The Chinese examples, often black and white/gold with patterned stripes are found as small reused fragments in European ecclesiastical garments, evidence of the era of long-distance trade between East and West. The reuse of striped fabrics can also be seen in many Mamluk quilted caps, made up from pieces of luxury striped and patterned silks, likely off cuts or remnants from other garments.

Here are the very well-used remains of a pair of striped pants. Constructed of woven lengths of selvage to selvage silk cloth, they are seamed to be comfortable when worn (and tied at the waist with a drawstring.). These loosely fitted trousers were called salwar or shalwār. In the 13th century men were forbidden to go out without them. (according to A. L. Mayer Mamluk Costume (1952) p.70 fn,5). Bits of red that can be seen around the center seams are likely to be the selvage edges of the various webs of cloth, though the deeply dyed indigo blue dominates the visual. When worn, much of the pant would have been concealed by a loose-fitting tunic or jacket—which may have been made from the same striped fabric.
Must have looked fantastic.

Elena Phipps, Ph.D., is an independent scholar who teaches textile history at UCLA. A former conservator and special curator at the Metropolitan Museum of Art, she has published a number of books and articles on textile culture, techniques and history. Elena was President of the Textile Society of America, 2011-2014.

← Which Came First: The Unit or the Repeat?
A Sense of Place →