Which Came First: The Unit or the Repeat? 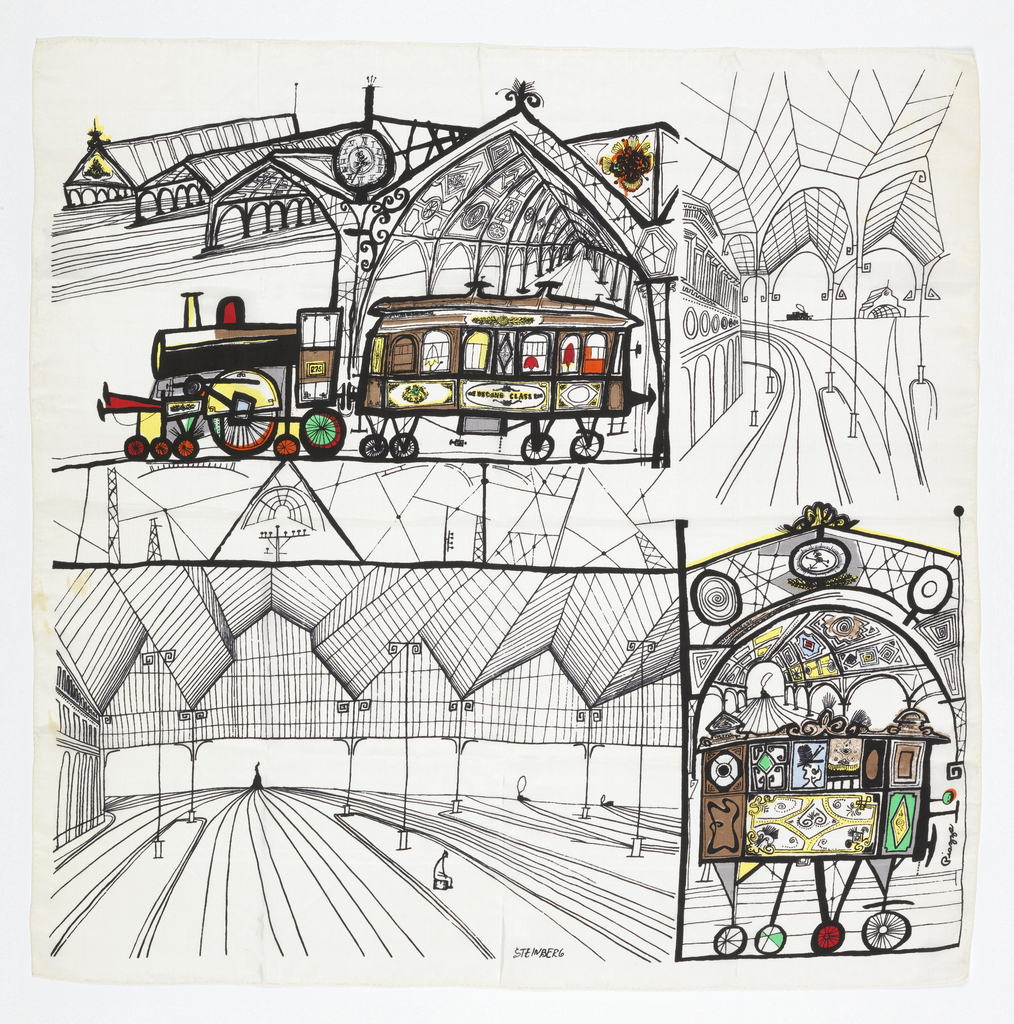 Posted by Kimberly Randall on September 8, 2017

Printed by Piazza Prints with the Saul Steinberg design titled ‘Trains,’ this scarf illustrates a fundamental principle of textile design: the pattern unit. A blank, white silk square becomes the canvas for Steinberg’s illustration of passenger trains sheltered in wrought-iron, glass-ceilinged stations. The locomotive engine and cars, and select architectural details, are peppered with color, and the overall inky linework retains the qualities of the artist’s works on paper. Compact horizontal scenes are stacked in rhythmic balance, placing the more densely detailed and colorful motifs over and under sparsely-drawn formations that play with conventional linear perspective. Neatly fit within the scarf’s borders, ‘Trains’ exemplifies the singular, “building block” quality of a textile pattern unit, or a single motif which may be used in various formats.

Versions of ‘Trains’ as hand-screen-printed cotton yardage by Patterson Fabrics, and a wallpaper also produced by the Piazza company (Patterson’s affiliate), demonstrate how a pattern unit is configured into a continuously recurring surface design known as a repeat. Though Steinberg’s cartoonist style would have been readily adaptable by any textile artist skilled in creating repeats, his documented compositions—including a related drawing, also called ‘Trains’—are mostly self-contained scenes, or motifs organized in registers, each in square or rectangular layouts. Simply organized end-on-end, Steinberg’s designs display the ideal requirements for straight repeats.

But which came first: the printed scarf, or the yard goods? Logically, the single pattern unit scarf would be produced before the repeating yardage, though first mentions of this design suggests otherwise. ‘Trains’ was featured as ‘chintz’ drapery fabric in MoMA’s Design Show: Christmas 1949, and singled out in a New York Times exhibition review: “Among the lengths of textured, loomed and printed fabrics that provide a pleasant background for objects in the exhibit, a facetious rendering of travelers by Saul Steinberg, cartoonist, is outstanding.” [1] Then, for its Spring 1950 issue, the industry chronicle American Fabrics put ‘Trains’ on its wrap-around cover—or rather, the design’s bottom half. The table of contents cited that ‘Trains’ was to be manufactured as drapery fabric by Patterson.

Steinberg’s signature is situated on the front cover’s lower right corner, but does not figure into the yard-good (or wallpaper) production. In repeat, it makes sense to relocate this to the selvedge as it is essentially not part of the pattern. Steinberg’s signature appears on the scarf, however, just to the left of where an artist’s imprint is usually found—possibly so as not to compete with the small, cursive “Piazza” discreetly trailing the caboose. Why is the signature not in the same location as on American Fabric’s cover? Since the publication typically featured artworks—and, ironically, not textile designs—on its covers, the portion of ‘Trains’ reproduced was likely from Steinberg’s original drawing. This reinforces the progression of original artwork leading to a pattern unit formatted for repeat printing, leading back to the modified pattern unit printed on the scarf. On close inspection, the signatures on the American Fabrics cover and scarf are also not identical—a mysterious quirk consistent with Steinbergian wit.

Leigh Wishner is Museum Coordinator at the Fashion Institute of Design and Merchandising (FIDM) Museum and Galleries, Los Angeles.