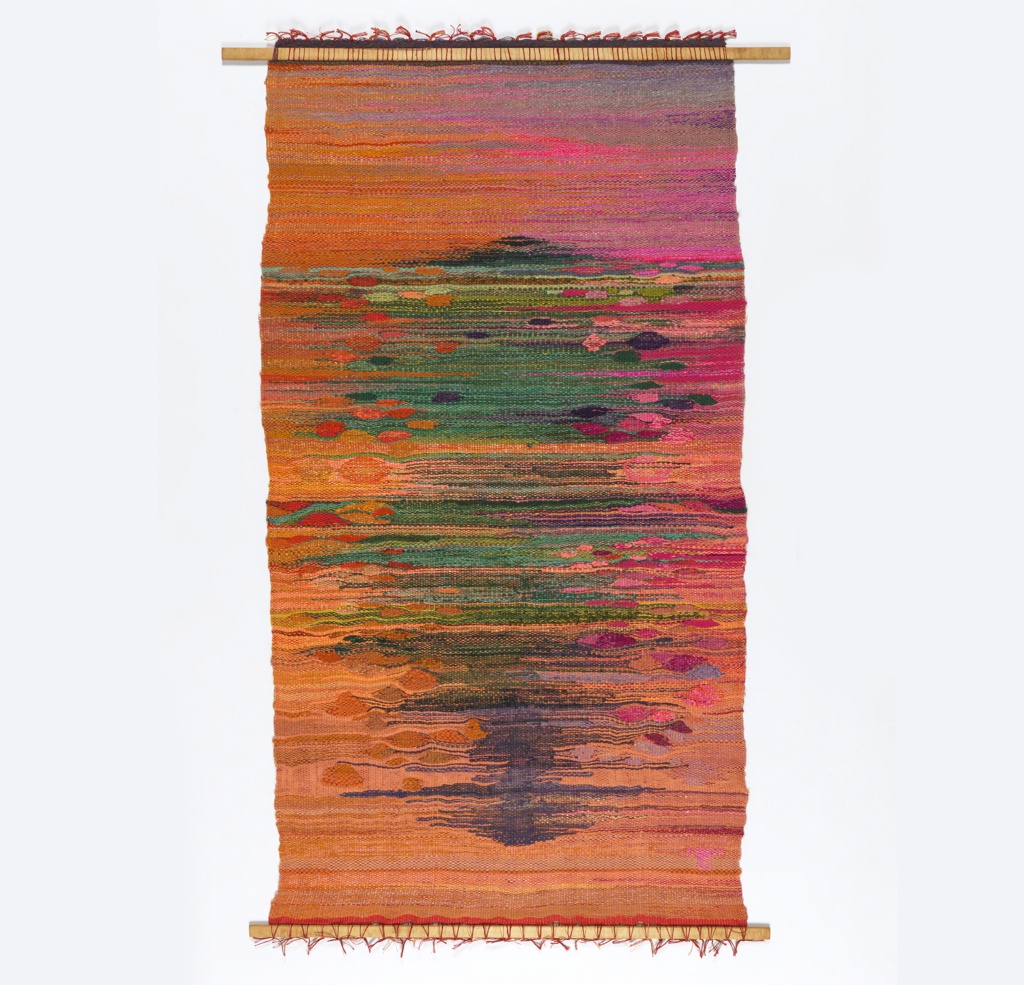 Posted by Kimberly Randall on September 7, 2017

To viewers familiar with Lenore Tawney’s iconic Woven Forms—tall, sculptural works in black and natural linen—the exuberant Reflections from 1959-60 may come as a surprise. Only two years before its creation, Tawney had moved to New York at the age of fifty to establish herself as an artist. She had studied tapestry design with Martta Taipale at the Penland School of Crafts in 1954 and begun to weave in earnest. Tawney recalled Taipale saying “Color is like music,” and added, “I could see color soaring like Gothic arches in the sky.” St. Francis and the Birds, Tawney’s first tapestry of her own design, reflected this inspiration. “I was going to do it in dun colors,” she said, “but it didn’t turn out that way. The red and yellow and pink crept in; the purple sidled up.” Reflections shares this palette. In its rich colors and textures, it is characteristic of Tawney’s early work. But it also shows her moving toward abstraction with a painterly approach to form reflected on a shimmering surface. When Tawney wove Reflections, she was living and working in a former sailmaker’s loft on South Street among a community of artists that included Robert Indiana, Ellsworth Kelly, Agnes Martin, and Jack Youngerman among others. Martin and Tawney, among the few women in the group and older than the other artists, were close. When Tawney’s first solo exhibition was presented at the Staten Island Museum in 1961, Martin contributed a brief introduction to the catalogue. It is the only time she is known to have written about the work of another artist. Reflections was included in this important show. “Lately we have been seeing new expression in many new media, and that is expected,” Martin wrote. “But to see new and original expression in a very old medium, and not just one new form but a complete and new form in each piece of work, is wholly unlooked for, and is a wonderful and gratifying experience.”

A few years later in Beyond Craft: The Art Fabric, Mildred Constantine and Jack Lenor Larsen looked back on Tawney’s show at the Staten Island Museum as being “the point at which Art Fabric was healthfully and joyously launched in America. Tawney’s breakthrough, her style and innovation, stimulated a small, then larger and international following…. From this time, the Art Fabric was considered so seriously as to be acquired by private collectors and public institutions.”

Reflections was part of this early history. With both ties to tradition and indications of new directions, it represents an important moment for Tawney, on the cusp of change.

Kathleen Nugent Mangan is the Executive Director of the Lenore G. Tawney Foundation.

← Cooper Hewitt Short Stories: Spotlight on Theater
Which Came First: The Unit or the Repeat? →

I LOVE this piece of Tawney’s work and wonder where I might see it?

does it get shown somewhere?

This piece is not currently on view at the museum, but keep an eye on the Lenore Tawney Foundation’s website for opportunities to see her work: http://lenoretawney.org/news/