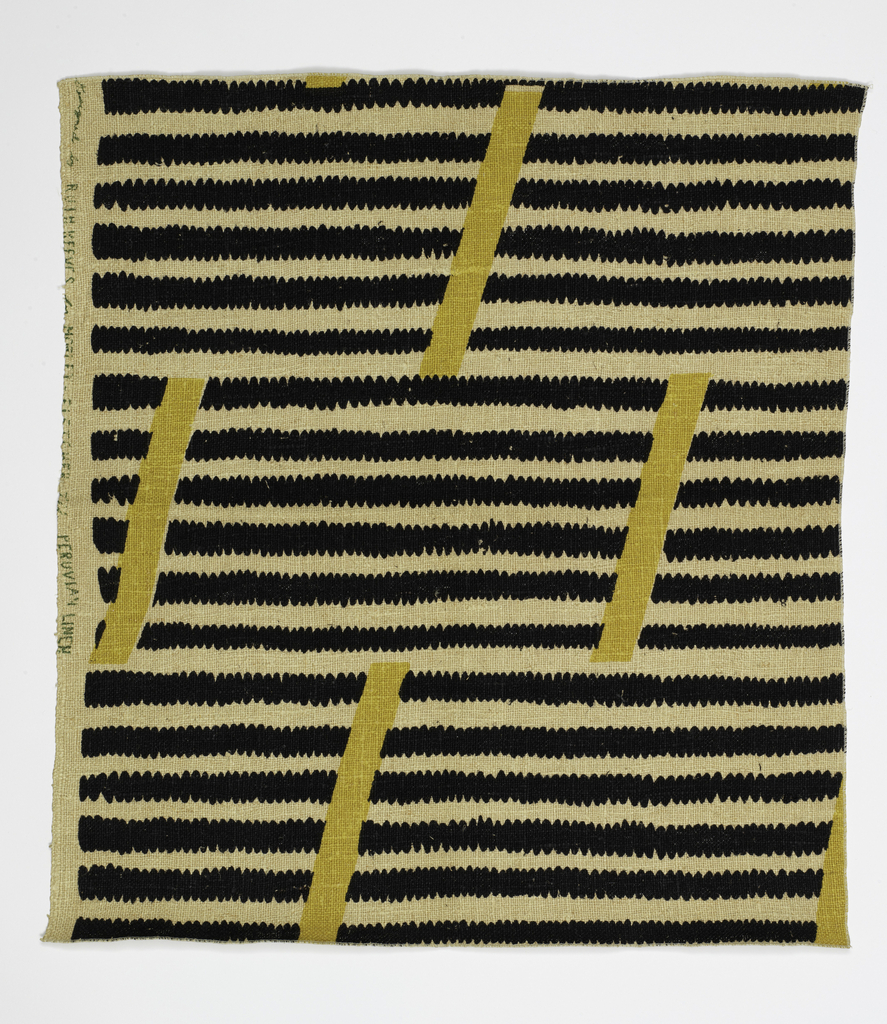 Posted by Kimberly Randall on September 1, 2017

This textile, titled after its saw-toothed stripe motif, was manufactured by Morley Fletcher & Co. in 1948 as part of a series designed by American artist and designer Ruth Reeves. The design originated in 1934, the year Reeves traveled to Guatemala as a Good-Will ambassador of the Carnegie Institution of Washington to study and collect hand-woven Guatemalan textiles. Upon her return, she created a group of predominantly hand-printed textiles, which she described as “modern adaptations” of the woven Guatemalan textiles she brought back. Both Reeves’s textiles (including this design) and their sources were included in a widely publicized exhibition that opened in New York’s Rockefeller Center in 1935 and later toured the United States for two years.

Reeves was part of a movement of artists and designers who perceived pre-Hispanic and indigenous American art part of a shared Pan-American heritage that could inspire an authentic style of American modernism, distinguished from European trends. Indigenous American art provided not only a “usable past,” but also a visual language that seemed akin to machine aesthetics in its geometric, stylized patterns and forms. While many artists refused to admit direct artistic borrowing, Reeves often discussed the specific sources of her works and occasionally displayed her works and their sources side by side. She continuously argued the designer should not copy her sources, but rather use them to reflect her own culture and era. “These native fabrics have their own validity in terms of the people and background which produced them,” Reeves stated, “and for a designer to adapt such patterns verbatim would only result in a sterile and unmeaning performance.” [1]

This textile, originally titled Oblique, was inspired by “the radiating lines breaking into the black and white weave of the woman’s wool belt from Chimaltenango in the Huehuetenango district of Guatemala,” as Reeves wrote. She isolated some motifs in the belt’s design—the oblique lines originally composing a repetitive x-shape and the background of saw-tooth stripes— simplifying and re-spatializing them over an ochre ground. Reeves’s saw-tooth stripes are significantly more irregular in both their shape and arrangement, playfully revealing the impact of the printer’s hand.

Reeves used a similar method in Festival, also featured in the 1935 exhibition. The design for this pair of hand-woven and hand-embroidered curtains, produced by Grete Franke, was drawn from a man’s festival tzute (head cover) from San Juan Ostuncalto. This bright, textured Guatemalan fabric is composed of patches of intricate geometric pattern made of supplementary weft (also known as brocade), juxtaposed with horizontal stripes. Reeves used this basic structure, yet she not only not only altered the proportion and direction of the basic design, but reduced and simplified the pattern. The result is a subdued, minimalist and suggestive design with a delicate, airy physical structure.

This 1948 version of Oblique, retitled Sawtooth, was featured in the 1948 exhibition “Decorative Art Today” at the Newark Museum, and the 1949 “Textile Panorama” at the Addison Gallery at Phillips Academy.

Noga Bernstein is a PhD candidate at Stony Brook University, writing her dissertation on Ruth Reeves’s global sources, and previously served as a Smithsonian Pre-Doctoral Research Fellow at Cooper Hewitt.

← A Bed for Living
In the Pocketbook →