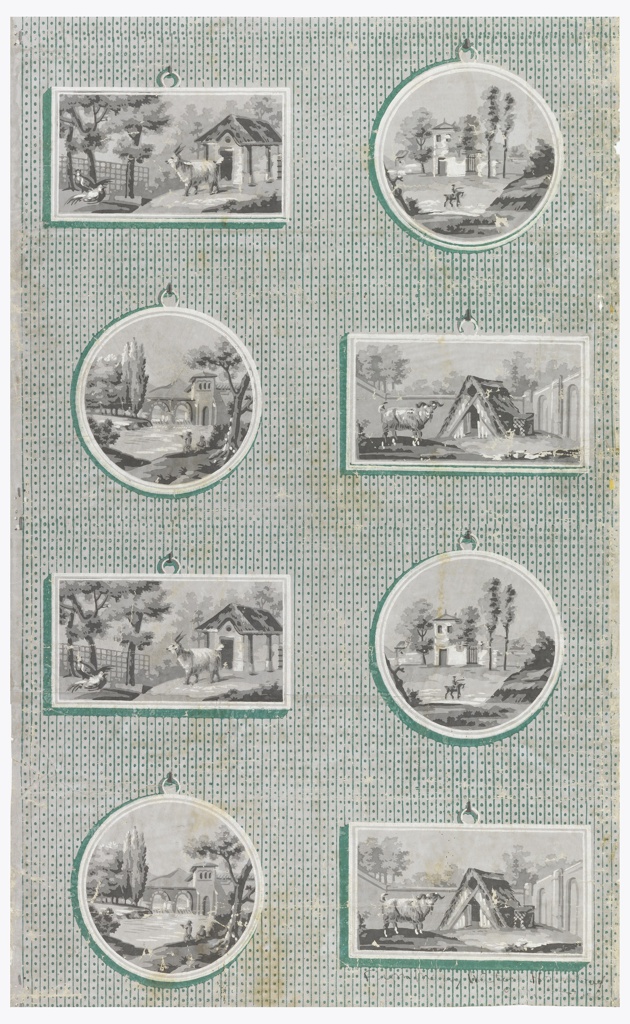 Posted by Gregory Herringshaw on August 24, 2017

I came across an image of this print room paper and became fascinated as I took a closer look at each of the framed landscape views. Each view contains a figure and a structure. And half the figures happen to be goats, living in these beautifully styled shelters. Just to confirm these were actually houses for the goats I did a Google search and was dumbstruck by the sheer number and originality of goat houses available.

As I mentioned, this is a print room wallpaper, designed to imitate the print rooms which became popular in England in the mid-eighteenth century. Print rooms involved the actual cutting and pasting of prints to the wall, then framing each with a printed border, while the surrounding areas could be further embellished with swags and other flourishes. Wallpaper manufacturers were quick to pick up on this trend and within a few years were producing papers copying the print room look.

The Cooper Hewitt paper is printed with a trompe l’oeil effect with each of the prints appearing to be framed and hanging on a nail. The prints alternate between rectangular and round, with the goats occupying the former, and seemingly having preference over the humans and their abodes. The one goat is in this beautifully fenced in lot with a home modeled after a Swiss chalet or similar A-frame structure, while the other goat lives in more of a manor house complete with columns and a dormer window. The people and their structures are shown much further in the distance and reveal a lot less detail. I had no idea such elaborate housing for goats existed. Maybe I need to get out of the city more!