Alexis Falize and the Eclectic Opulence of the Second Empire 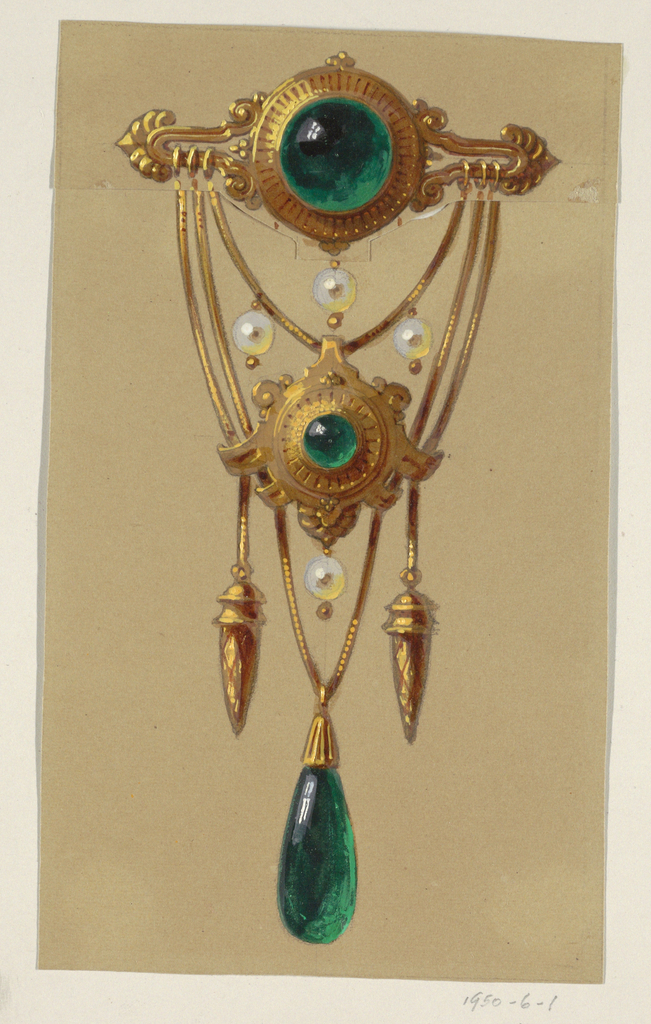 With the ascension of Napoleon III in 1852, Second Empire France had a revival of court life. The stability of the new imperial regime and a buoyant economy brought exhibitions, grand balls, and stage productions to the forefront of Parisian lifestyle. An increased interest in the arts paved the way for a variety of aesthetic experimentation in the decorative arts, particularly in jewelry, giving rise to a new, opulent and eclectic style, grounded on a varied mix of revivals of historical styles.[1]

Toward the mid-1850s, the interest for Greek, Egyptian and Etruscan styles further complicated the eclecticism that had begun to develop in the early years of the Second Empire. During this decade, jewelers dedicated themselves to an exploration of several ancient styles in their creations, as this design for a brooch illustrates.

With cabochon emeralds, roundels, and palmettes, this design, created ca. 1855 by Alexis Falize, is a magnificent exercise in the neo-grec (neo-Greek) style. A gold roundel with a green cabochon emerald, flanked to the sides by elongated U-shapes with scrolling edges, which are in turn flanked by palmettes, sits on the top. From it hang three loop-in-loop chains, which hold a cartouche enclosing another roundel of smaller size, a large, teardrop green emerald, and two golden vase-like beads. Separating the larger roundel from the cartouche are three round pearls, and a fourth one hangs from the cartouche. Likely drawn to life size, the brooch displays the opulence of a period in which there was a vast increase in the size of brooches, almost paralleling the increased volume of the crinoline in contemporaneous fashion design.[2] The variety of design elements used – from roundels to palmettes, from cabochon pearls to loop-in-loop chain – reveals a mix of historic inspirations that borrows from Ancient Greek, Etruscan and Renaissance styles.

Most importantly, the brooch reveals the genius of Alexis Falize, one of the foremost designers of the Second Empire. Throughout his lifetime, Falize designed for the most important jewelers of his time: from his training years in Paris with the brothers Mellerio dits Meller in the 1830s, to working with Boucheron in 1867, he was a long-time exponent of the eclecticism and opulence of the Second Empire, as this design for a brooch suggests.[3]

Laura Beltran-Rubio is a design historian and graduate of the Master’s program in Fashion Studies from Parsons School of Design.

← Goats Living the High Life
The Duty of a God →