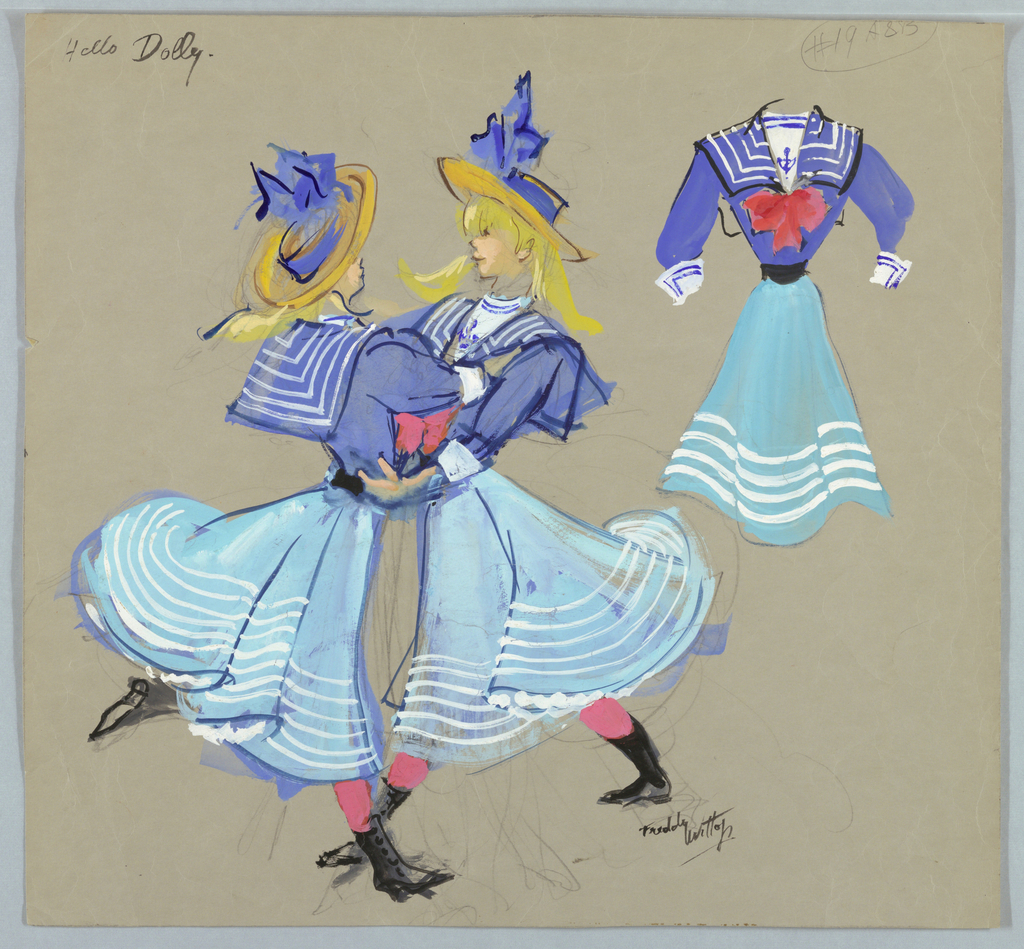 The most iconic costume from the musical Hello, Dolly! pairs an elaborate, feathered headdress with a beaded, crimson gown, glamorizing the brash comedic timing of the show’s star. But the plot of the musical originates in a location that requires much humbler attire: a feed merchant’s outpost in Yonkers, New York. As such, the young girls in this costume design by Freddy Wittop dance in their modest but festive Sunday clothes.

That you feel as fine as you look!”[i]

Wittop dedicated substantial time in his design process to historical research, and for his work on Hello Dolly!  he consulted the Costume Institute at the Metropolitan Museum of Art.[ii] He also took inspiration from an archetypal figure of the late nineteenth and early twentieth centuries known as the “Gibson Girl,” an illustrated figure created by Charles Dana Gibson, of young women who sported slim waists, starched shirts, leg-o’-mutton sleeves, and sailor hats.

Wittop received a Tony Award for his work on Hello, Dolly!, and the show’s fashion moments drew almost immediate comparison to Cecile Beaton’s chic costuming for My Fair Lady  (both the Broadway production in 1956, as well as the film in 1964). While the Boston Globe review disparagingly described Wittop’s work as “oddly clashing pastels,”[iii] another review countered that, praising, “one kaleidoscopic scene that unfolds on the stage as the people of Yonkers put on their Sunday clothes is breathtaking in its fashion impact. Cerise, purple, green, violet, yellow, fawn, orange, ecru, white, and bright blue, play against each other with great eye appeal.”[iv] Wittop’s sketch summarily demonstrates this coordinated, colorful unfurl, with contrasting shades of blue and a playful pop of pink producing—to pluck a few words from above—great eye appeal.

“Get out your feathers

Your beads and buckles and bows”[v]

While perhaps best known as a musical comedy with a meaty comedic role for a hearty leading lady, Hello, Dolly!  is also notable for its dance numbers, a nod to the backgrounds of two of its creators. The original Broadway production was directed and choreographed by Gower Champion, a dual role not entirely uncommon, but certainly notable. Wittop similarly had two celebrated careers as both a dancer and a costume designer, roles that were sometimes closely related—designing shows while dancing in others, or dancing in shows he designed. His sensibility as an artist of movement translated into the aesthetics of his costume designs, as he believed that “all clothes must have one quality—movement.”[vi] This is certainly evident in the ebullience of this costume sketch, in which the simple modeling of the costume design is almost secondary to the study and expectation of the costumes’ motion. The interplay of costume and dance is further enhanced by the delicate pencil outlines around the girls’ feet and skirts—Wittop playing designer and dancer, choreographing sartorial kinetics.

“For there’s no blue Monday in your Sunday clothes!”[vii]

Matthew J. Kennedy is the Publishing Associate at Cooper Hewitt, and additionally researches the histories of design and theater. He would like tickets to Hello, Dolly!…