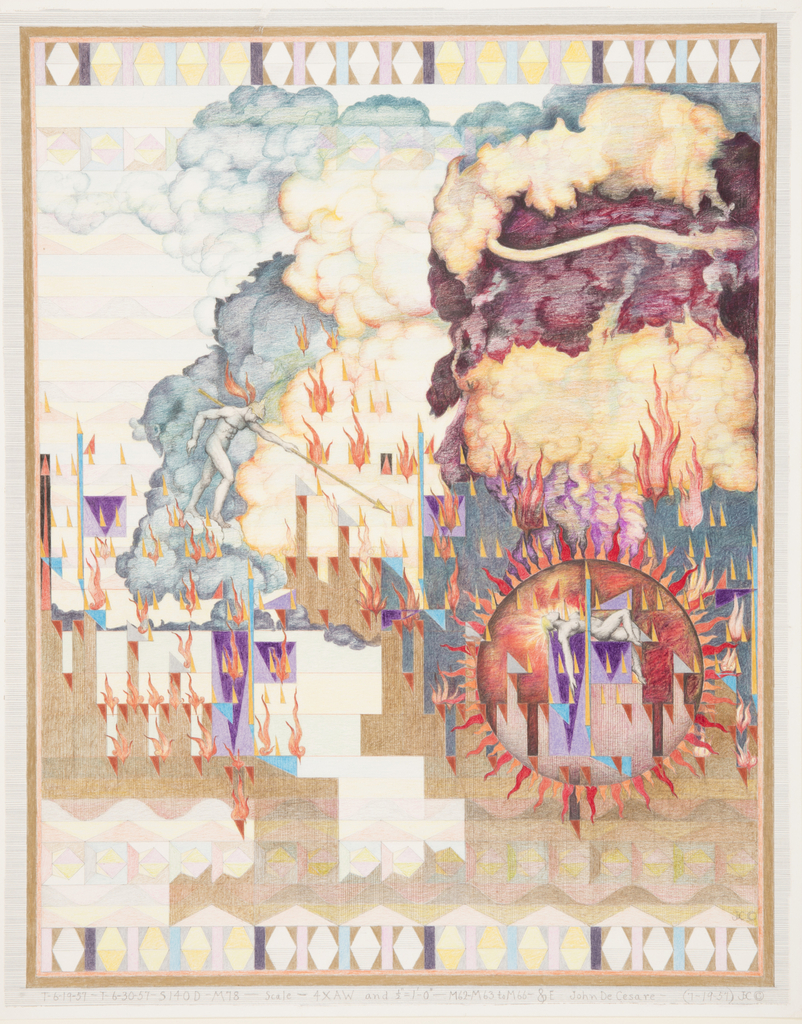 Though this striking drawing may at first seem to present a colorful abstract fantasy, the design meticulously translates 78 measures of the 1870 music drama Die Walküre into a new complex visual form. Before creating this ornamental design, John De Cesare worked very successfully as an architectural sculptor. He provided sculptural decoration for some of the earliest and most significant Art Deco buildings in the United States, including the Empire State Building, the Barclay-Vesey Building, and the Irving Trust Company Building. By the mid-1940s, the prevalence of the International Style in architecture rendered the architectural ornamentation of the early 20th century unfashionable. As a result, De Cesare retired from his 25-year career and spent a reclusive retirement obsessively studying what he referred to in a short unpublished manuscript as “The Visual Space in Music.” In this drawing and in many other related examples in Cooper Hewitt’s collection, De Cesare seeks to translate the aural art of music into a new visual form.

Traditional music notation assigns a staff to each instrument and thus visually separates the sounds of the orchestra. By contrast, De Cesare created a visual representation of the music as it is experienced by the listener, simultaneously showing all the sounds of the symphony. Though the effect is a design that does not “look” like music, each geometric form that De Cesare uses along with its orientation, size, color, and location directly relates to an aspect of the musical transcription. If a viewer were to master De Cesare’s symbolic notation, this drawing could still be “read” as a musical score. Interestingly, De Cesare often used his musical visualizations to create designs for architecture and ornament. In this example, his musical notation forms an abstract landscape in which he stages the final scene of Die Walküre, further relating the imagery to the experience of the music. The array of stacked brown vertical rectangles in the lower half of the composition evokes the mountains where the Valkyries assemble in Act 3 of the music drama. The figure of Wotan at left traps Brunnhilde in a state of enchanted sleep on the mountaintop, surrounding her in a circle of magic fire that will permit only the bravest heroes to pass its boundaries. The summit upon which Brunnhilde reclines contains forms that represent the drama’s score, and their arrangement likewise evokes the geometric silhouette of a skyscraper, referring back to De Cesare’s architectural origins.

← Chan Chan
A Miró of Your Very own →

One thought on “Visual Space in Music”