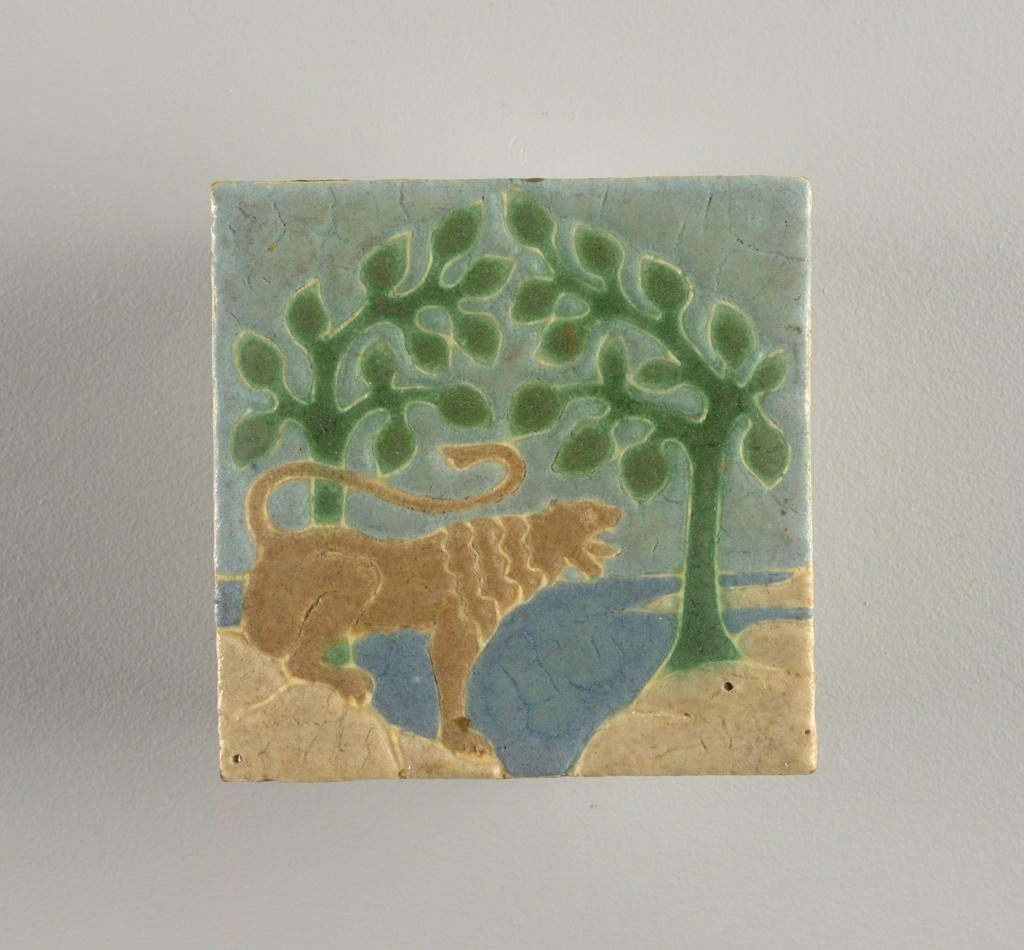 The Grueby Faience Company was founded in Revere, Massachusetts, in 1897. Grueby quickly grew in popularity and soon collaborated with Tiffany and Co. to produce ceramic lamp bases. Best known for their creation of a distinctive forest-green glaze, Grueby used this colorway on their iconic vases and tiles. Grueby garnered many awards, including accolades from the Paris Exposition Universelle of 1900 and the Louisiana Purchase Exposition in St. Louis in 1904. During the Arts and Crafts movement, ceramic tiles became a widespread form of interior decoration for both the public and private sphere. The most notable public commission Grueby fulfilled was creating tiled mosaics for the Bleecker, 33rd, and Astor Street stops of the New York Subway. These tiles primarily feature a cobalt blue glaze, and many of the tiles still remain in situ to this day. Grueby crafted both glazed monochromatic and figurative tiles for interiors. On this tile, the playful decoration of the roaring lion and the stylized, flowing tree could point to an Assyrian source of inspiration. During the early 20th century, Assyrian style architectural elements were often incorporated into public building interiors in America.

Like many other American art pottery organizations, Grueby primarily employed women to glaze their pottery. However, throwing or forming clay was considered unfeminine and men formed most of the ceramics at Grueby. After firing, women would then glaze and decorate the ceramic wares. Marie A. Seaman, Julia Bradley, and Florence S. Liley were among the most noted women that painted and designed for Grueby. Women like the Grueby pottery ladies gained new freedoms from being makers during the Arts and Crafts movement in America. During the late nineteenth and early twentieth centuries, middle-class and upper-class women began to move outside of the spheres of the home. At the beginning of the nineteenth century, women were confined to either marriage or the genteel poverty of spinsterhood, as earning wages was seen as unnatural and scandalous.  However, this vision of the home-bound woman known as “True Womanhood” was gradually overturned by the conception of “Real Womanhood,” that advocated for women earning an honest income through gender-appropriate work.[1]

The Arts and Crafts movement made it more acceptable for women to acquire a technical knowledge of craft and to earn money from their creations, and women began to learn the skills and trades of previously male-dominated fields, like silversmithing, glasswork, jewelry-making, and ceramics.  This legitimization provided women with the opportunity to pioneer innovations in both technique and style, and many new glazing techniques were invented by women like Mary Chase Perry, Maria Longworth Nichols, and Mary Louise McLaughlin.

← Flowers for a Gent
Enduring Knots →

One thought on “Cat on a Hot Thin Tile: A Grueby Faience Company Tile”

2nd para 5th line – “pottery ladies” should be in quotes. Today we would never use “ladies” except as a reference to the past in quotes.