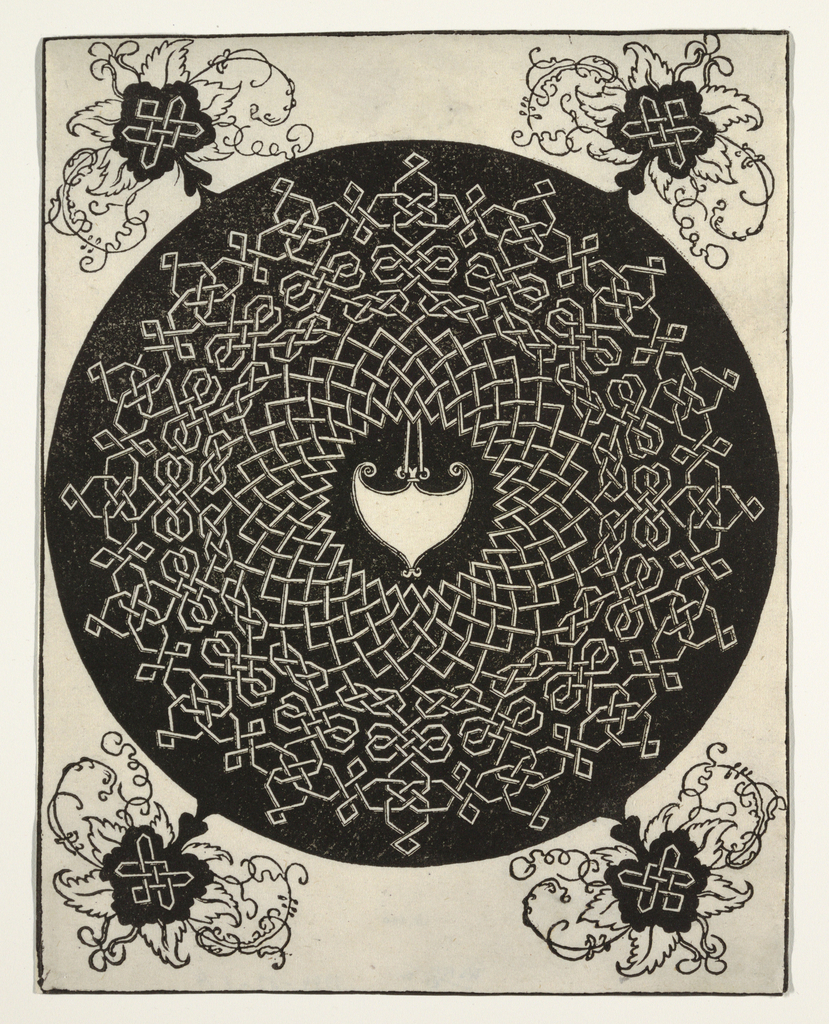 For centuries, this intricately wrought interlace design—one of six similar motifs produced by Albrecht Dürer—has entranced and perplexed those who have encountered it. The intended purpose of the Knots, as Dürer referred to the series, as well as the precise date of their execution, remains unknown. Some scholars have postulated that the designs are patterns for embroidery or textiles. Others have suggested that they were ornamental designs for ceramics, or as labyrinthine didactic tools for training draftsman.[1] 1 What is certain is that the story of the Knots traverses culture and time, touching on the relationship of master and student, and the reuse and reinvention of a series of graceful, rational motifs.

Born in Nuremberg on the cusp of the German Renaissance, Dürer was a virtuosic artist and intellectual, renowned for his painting and draftsmanship as well as for his theoretical writings on proportion and geometry. One of his greatest legacies was his visionary contributions to the medium of printmaking. A master of both engraving and the woodcut, Dürer brought an unprecedented tonal and descriptive range to his prints, endearing his audience to printmaking and revolutionizing the potential of the medium. The decorative tradition of geometric interlace patterns predates Dürer by centuries, and was employed in Roman, medieval, and Islamic ornament. This remarkably complex woodcut, however, has its direct origins in the work of Dürer’s Italian contemporary, Leonardo da Vinci (1452-1519). All six interlace patterns, in fact, are copies of designs by Leonardo, for whom interlace motifs may have served as an informal, lyrical coat of arms. Vinci, his birthplace, translates as “to entwine”, and his notes reveal a preoccupation with the word gruppi, the Lombard term for “knots.” Interlace designs appear in many of Leonardo’s drawings and paintings, often as ornamental motifs worked into the hair or clothing of his subjects. The designs are also found in the decorative interlaced branches in the magnificent fresco ceiling for the Salle delle Asse at the Sforza Castle in Milan. To compose his circular knot designs, Leonardo would have constructed a grid of dots, weaving his drawn lines around them. But Dürer would likely have come to know the six designs through a series of unattributed engravings after Leonardo’s drawings during his transformative trip to Venice in 1494-95.

The six Knots are a rare example of Dürer directly copying another artist’s work. The woodcuts appear to replicate not only the interlace configuration, but also the precise measurements of the designs, which suggests that Dürer traced the engravings. Sometime after his return to Germany, it is presumed, Dürer carefully copied the designs onto blocks of wood, which were then cut by a craftsman so expert as to be able to carve out the delicate web of knots without breaking the wood between the carved lines. Black ink would have been spread across the surface of the woodblocks, catching only the astonishingly minute recesses between the maze of lines, before the blocks were pressed against the paper to produce the prints. The Knots put Dürer in the position of both student and master. On the one hand, the project offered Dürer the opportunity to study and replicate the remarkable work of Leonardo. But the decision to reproduce Leonardo’s designs in woodcut allowed Dürer to showcase his consummate dexterity in a medium that did not ordinarily lend itself to exquisite, intricately entwined lines. Beyond enabling Dürer to demonstrate virtuosity in the woodcut, the intended use of the six prints remains an enigma. His only recorded mention of the prints, in his diary, describes his sale of a set to a glassmaker in the Netherlands.[2] Though we may never fully recover their original purpose, the beauty and complexity of the Knots continue to endure.

← Cat on a Hot Thin Tile: A Grueby Faience Company Tile
A Different Kind of Blanket →