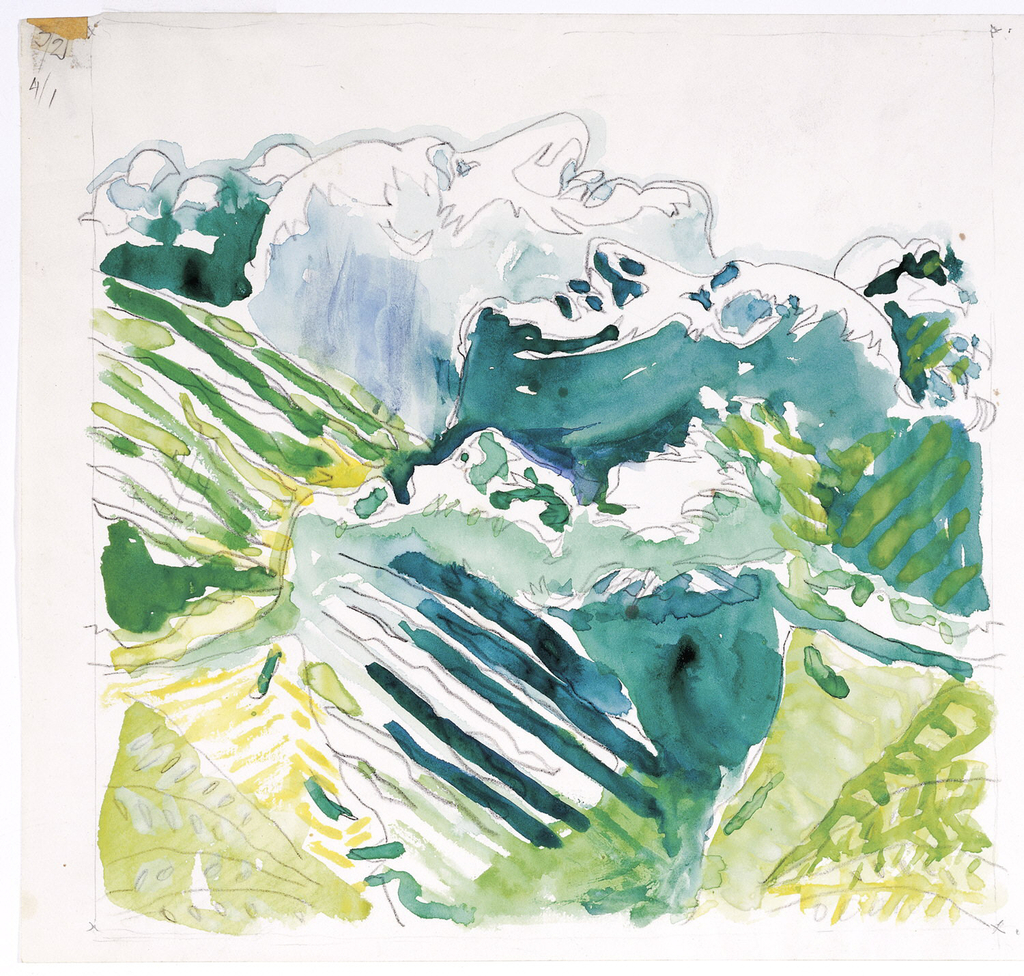 At first glance, this design drawing for the tapestry Our Mountains by Trude Guermonprez (American, b. Germany, 1910–1976) may appear to be a simple mountain landscape. A closer look reveals that the cool blue-green peaks and valleys are actually formed by three reclining faces in profile. In the background, the face of Guermonprez’s husband John Elsesser repeats twice to form distant mountains, while the profile of Guermonprez in the foreground forms the hills below. Completely integrating the faces of the artist and her husband into the mountain landscape they often visited, Guermonprez’s tapestry design presents an intimate and poetic weaving as well as an innovative approach to self-portraiture. Our Mountains is part of a group of Guermonprez’s tapestries that she referred to as “textile graphics,” a concept she first experimented with in her 1948 tapestry Leafstudy and which she returned to in the design for Our Mountains and other portrait-based tapestries towards the end of her life. Through her textile graphics, Guermonprez asserted her role as a creative designer as well as a weaver. In the mid-twentieth century, most pictorial tapestries were still formed according to the Gobelin tapestry tradition—painters often designed the tapestries, and skilled weavers translated their designs to fiber. Using the same creative gesture as traditional fine artists, Guermonprez began painting directly on the tapestry’s warp, using the interlacing weft fibers to transform the color and texture of the composition.[1]

While Guermonprez’s early career was defined by a Bauhaus focus as she designed functional weavings and prototypes for industry,[2] these more personal compositions towards the end of her life were triggered by a set of photographs of Guermonprez and her husband captured by a friend. Guermonprez described her process of transforming these photographs in a 1974 statement: One of my portraits shocked me and I felt compelled to make a drawing after it in hard planes of black and white. From that drawing I cut a stencil and used it to print on the warp. I used the stencil in various ways and let the weaving strengthen the symbolism of the ideas, adding graphic values as they came out of the interlacing structure and the color and body of the fibers. Then I used a photograph of the profiles of John and myself in the same way.[3] Several drawings in Cooper Hewitt’s collection demonstrate Guermonprez’s fascination with these photographs, and the tapestries she designed from them range from more direct silhouette portraits to other experiments with natural imagery—in My Horizon, the same facial features that appear in this drawing take the form of white clouds drifting across a flat gray landscape. This study for Our Mountains provides insight into Guermonprez’s painterly design process, and the final tapestry demonstrates her method of using texture and color to build up a final image of the designer and her husband as one with the natural universe.

← Call for Adventurers
A Royal Addition →