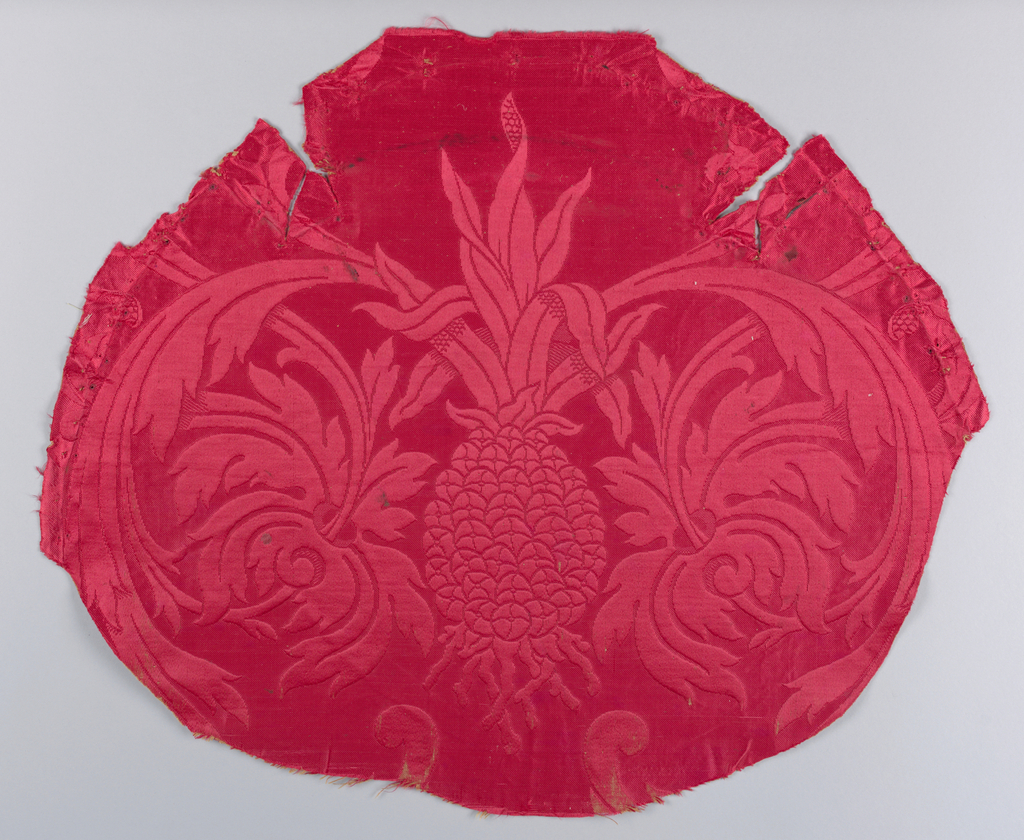 Acquired in 1896, this fragment of red damask reportedly was removed from a chair following Emperor Maximilian’s brief reign of Mexico, which ended with his execution in Querétaro in 1867. When Napoleon III of France invaded Mexico in 1862, he intended to install a government friendly to French interests and subsequently invited the young Austrian Archduke Maximilian (1832-1867) to Mexico in 1863 to assume the role of emperor. This served the dual purpose of restoring a monarchy for Mexico’s conservative royalists and reestablishing European influence in the Western Hemisphere. Maximilian arrived in 1864 only after French troops had secured Mexico City.

Although just a fragment, this striking red fabric features a modified version of Mexico’s coat of arms: beneath a royal crown is a golden eagle perched on a stylized prickly pear cactus with a serpent caught between its beak and talons. Mexico achieved independence from Spain in 1821, and its first flag featured the eagle, snake and cactus in a similar arrangement. The composition has a long history dating back to the Aztecs and appeared in several pre- and post-conquest codices—the sheets and volumes with images and pictograms illustrating Aztec life and culture. The fabric very likely was woven in Lyon, France and sent to Mexico to upholster and decorate various public rooms and suites of the Palacio Nacional and Chapultepec Castle in Mexico City. The fabric also appears in several rooms at Miramare, Maximilian’s castle in Trieste, Italy.

One thought on “A Royal Addition”

“modified version of Mexico’s coat of arms: beneath a royal crown is a golden eagle perched on a stylized prickly pear cactus with a serpent caught between its beak and talons ‘

The fabric presented does not match the discussion. ????