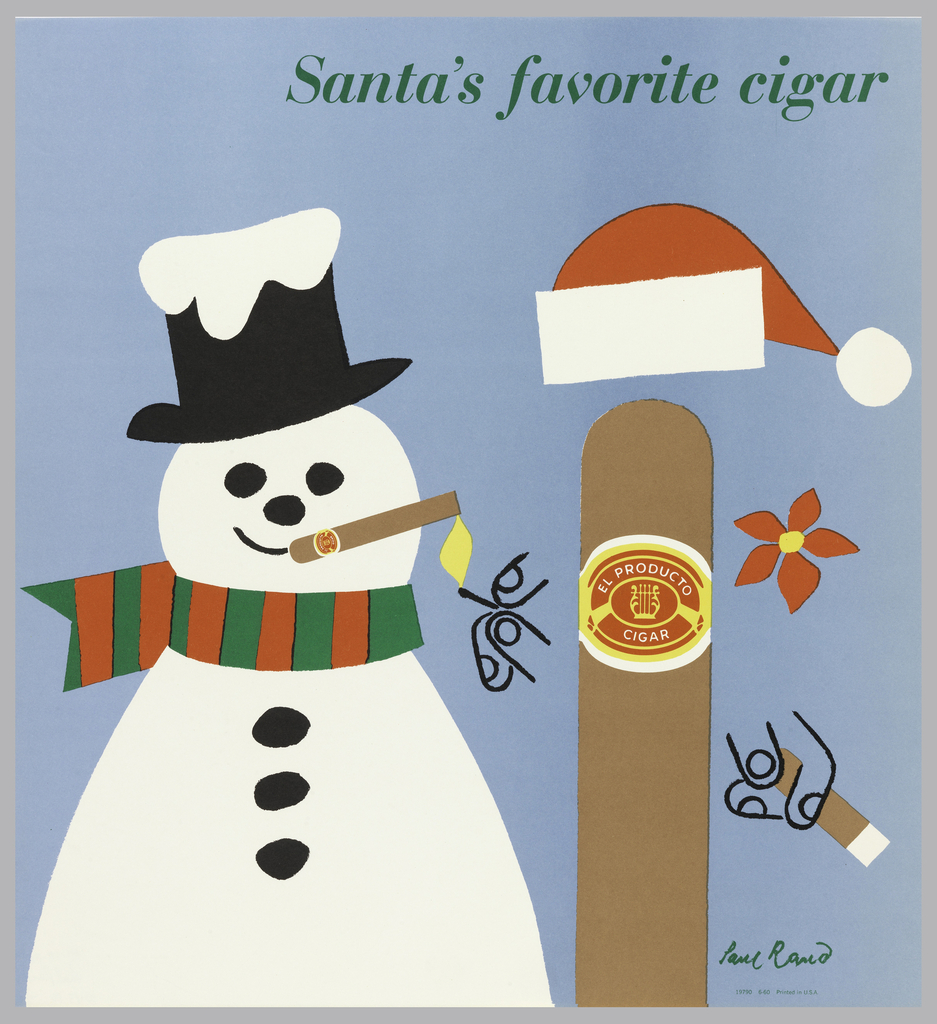 The characteristic wit and whimsy of graphic designer Paul Rand dominates a long-running series of ads designed for El Producto in the 1950s. Already wildly successful by the 1940s, Rand was hired in 1952 to revamp the American-made cigar company’s advertising efforts after production shifted from hand-rolled to machine-rolled cigars. To enliven these factory-made products, Rand personified each of the company’s eight different cigar models via distinctive hats and accessories and paired them with the tagline “a size and shape for every personality.”

The vast majority of Rand’s iconic ads feature a photorealistic reproduction of the specific cigar model against a white ground with sketchy, hand-drawn elements, but this design for a poster, likely dating from a seasonal variation of the campaign that ran in 1953, has a more graphic approach. Rand has reduced the elements of the scene to silhouettes and flat planes of color. The El Producto cigar, a festive Santa hat and poinsettia blossom supplanting its traditional trimmings, is now depicted as a flat-brown column, while the figure of Frosty the Snowman, whose cigar “Santa” lights, resembles a child’s paper cut-out. The new style of the advertisement and the tongue-in-cheek scene would have set El Producto’s ads (and by extension their product) apart from their main competitor Dutch Masters, who ran a more traditional representational campaign throughout the 1950s.

Rand began his career in graphic design in the late 1920s, after training at both the Art Students League and Parson’s School of Design. At a time when American advertising was dominated by photographic realism and the use of traditional typeface and layout, Rand — influenced by Constructivism, the Bauhaus, De Stijl and Cubism — was influential in bringing the graphic style that was then known as “New Typography” to advertising in the United States. His lasting influence earned him the moniker “The Picasso of Graphic Design.”[1]