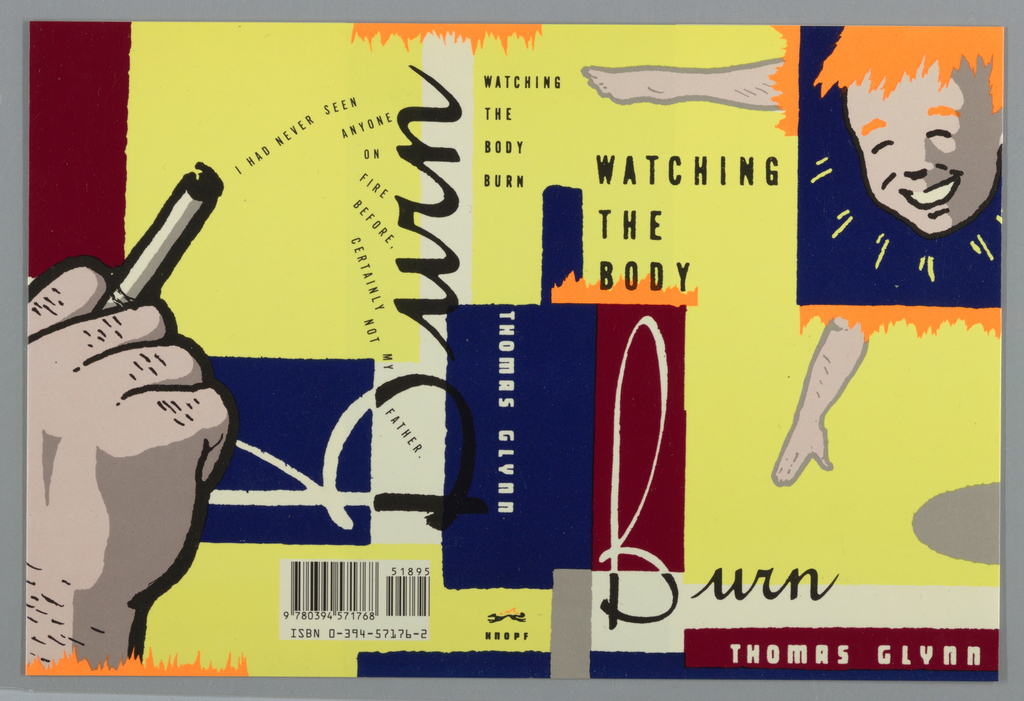 If you’re judging this book by its cover, Chip Kidd’s 1989 design for Watching the Body Burn by Thomas Glynn might encourage you to wonder what crazy contents lie within. The disjointed imagery, text, and loud colors certainly draw consumer attention, but Kidd’s design is more than a sales tactic—the frenetic cover design complements the surrealist novel, in which a boy recounts a disturbing series of increasingly violent vignettes about the deterioration of his father. Kidd’s design process for a book cover always begins by reading the manuscript. Understanding the novel is the first step towards creating a piece of visual art that harmonizes with the literature. This cover, just like the novel, needs to be decoded, but the uneasiness that the Watching the Body Burn design inspires with its fragmented body parts and too-bright colors immediately speaks to the book’s unsettling tone.

In the 1980s, Kidd was an essential member of a team of young designers at Knopf working under art director Carol Devine Carson that transformed the look of bookshelves across the country.[1] Book jackets dramatically shifted from a plain protective covering to a rich design that considers the entire book as a unified object. Further extending the unity of Kidd’s design and Thomas Glynn’s manuscript, Watching the Body Burn was Kidd’s first comprehensive design for a novel, meaning that he designed the binding, and text in addition to the jacket. Kidd’s design was partly inspired by vintage matchbooks—his extractions of text throughout the book use the same visual language as old advertising slogans.[2] The rectangular forms in blue, red, and white throughout the cover may also allude to the matchbook’s unfolding shape. Commanding the most attention is the smiling boy at the cover’s upper right corner, whose textured red hair reappears throughout the design as a subtle line of flames. Kidd even modifies the Knopf colophon on the spine so that the borzoi too is on fire. On the back cover, haunting words emerge like smoke from the father’s cigarette, drifting downwards until they overlap the word “Burn”: “I had never seen anyone on fire before, certainly not my father.” Though Kidd has designed more than 800 book covers (some of which we are lucky to have in Cooper Hewitt’s collection), each cover is a unique response to the literature that completes it.

my favorite game is Ocarina Of Time

Pharm line is going down