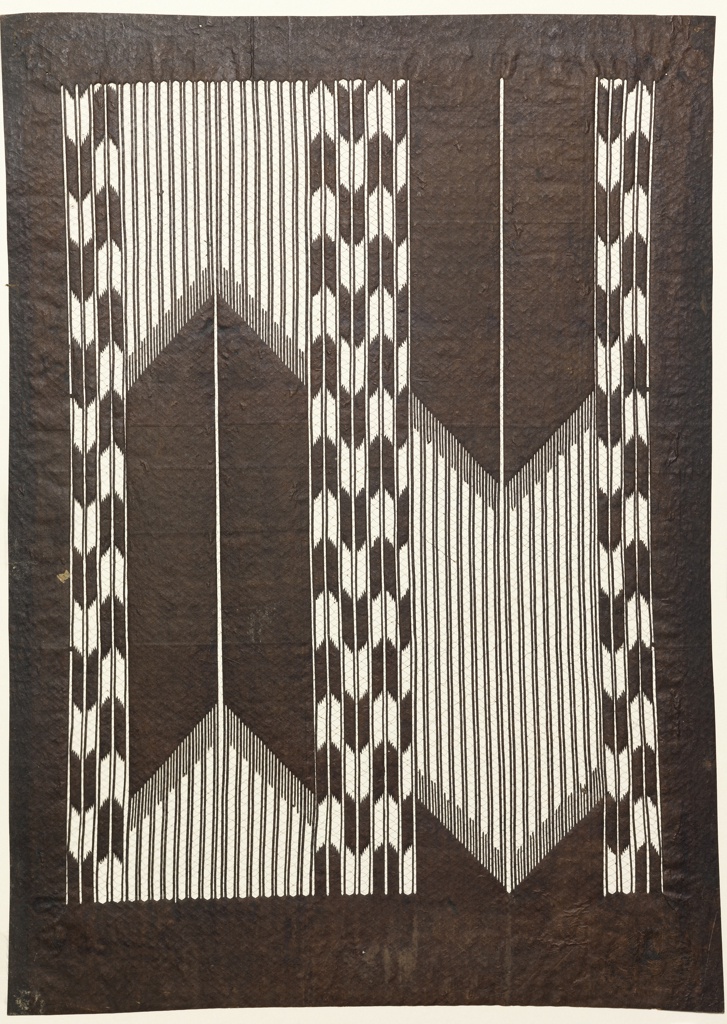 Posted by Caitlin Condell on September 14, 2016

The word katagami, the Japanese term for the paper stencil used to print patterns on fabric, translates literally as “pattern paper.” Featuring designs and motifs drawn from nature, traditional folklore, and literature, katagami are crafted as tools to be used in the resist-dyeing process that is used to produce printed textiles in Japan. The patterns that are carved into katagami are not conceived of with the intention of being seen in isolation, as a single sheet, but as a seamless series of repeats in a larger textile. Yet the delicately rendered, rhythmic motifs of these stencils have often given them a second life, as a collectible and as an inspiring object of beauty. This remarkable Arrow Design Imitating Warp Ikat, which probably dates to the Meiji period (1868–1912), is one such example.
The tradition of using paper stencils to resist dye for printing dates back as early as the eighth century, around the beginning of the Heian period, and the use of paper stencils in the resist-dye process emerged during the Kamakura period (1185–1333). Yet it was in the mid- to late Edo period (1603–1868) that dyeing with katagami became a flourishing method, one that continued through the Meiji period. While the resist- dye process can be used to produce textiles for many purposes, katagami have primarily been used to dye fabrics for kimonos.
Katagami are carved by craftsmen who train as apprentices for many years, often learning to specialize in a single method of cutting. The trade demands intense mental and physical concentration and dexterity. Stencil carvers typically focus on a single carving technique, by either pulling the blade toward or away from the body. Others specialize in designs composed of minute perforations. At the height of the stencil carvings’ popularity, and even among some carvers today, an entire career might be built around a specialty of shima-bori, or stripe cutting, a technique that would have been essential to creating this remarkable design of arrows running in opposite directions.
Stencil carvers rely on the production of properly prepared mulberry paper. The paper is then treated with persimmon tannin and aged. The juice and the paper become one, turning a deep copper brown. The persimmon tannin makes the paper waterproof. By the time the paper is ready to be carved, it is durable enough to remain intact once it is soaked in preparation for each use, and flexible enough to retain its original dimensions without warping during the dyeing process. The stencils are crafted to be resilient to the rigorous process of printing, for a stencil is typically used hundreds of times before being retired. The carving process for a single design might take days or weeks, but several copies of the same design are carved at once by binding several layers of paper together.
The pattern design for any given sheet of katagami is dictated in part by the need to make the stencil hold together. Silk thread was commonly used as reinforcement between the sheets of paper, enabling delicate designs that maximized the relation- ship between positive and negative space that is at the heart of any sheet of katagami. Because Japanese garments were traditionally made without a shoulder seam, a pattern such as Arrow Design Imitating Warp Ikat, in which half the design points up and half points down, allows for a fluid repeat of the pattern on the front and back of the garment. Many designs also contain visual elements that hold special meaning in Japan. Arrow Design Imitating Warp Ikat not only makes use of the incalculable precision of a shima-bori carver and the rhythmic balance of positive and negative space, but also employs the meaningful motif of arrows, which are considered  a protective talisman.
Although katagami were rarely collected as art objects in Japan, Western artists, designers, decorative arts schools, and museums began collecting the stencils as early as the 1860s. Designers as influential and diverse as Koloman Moser, Josef Hoffman, Eugène Grasset, René Lalique, Henry van de Velde, and Lockwood de Forest all used katagami as source material for their decorative work.

You can watch a video of the process of creating and using katagami here:

← An Inspired Pot
Take a Memo →