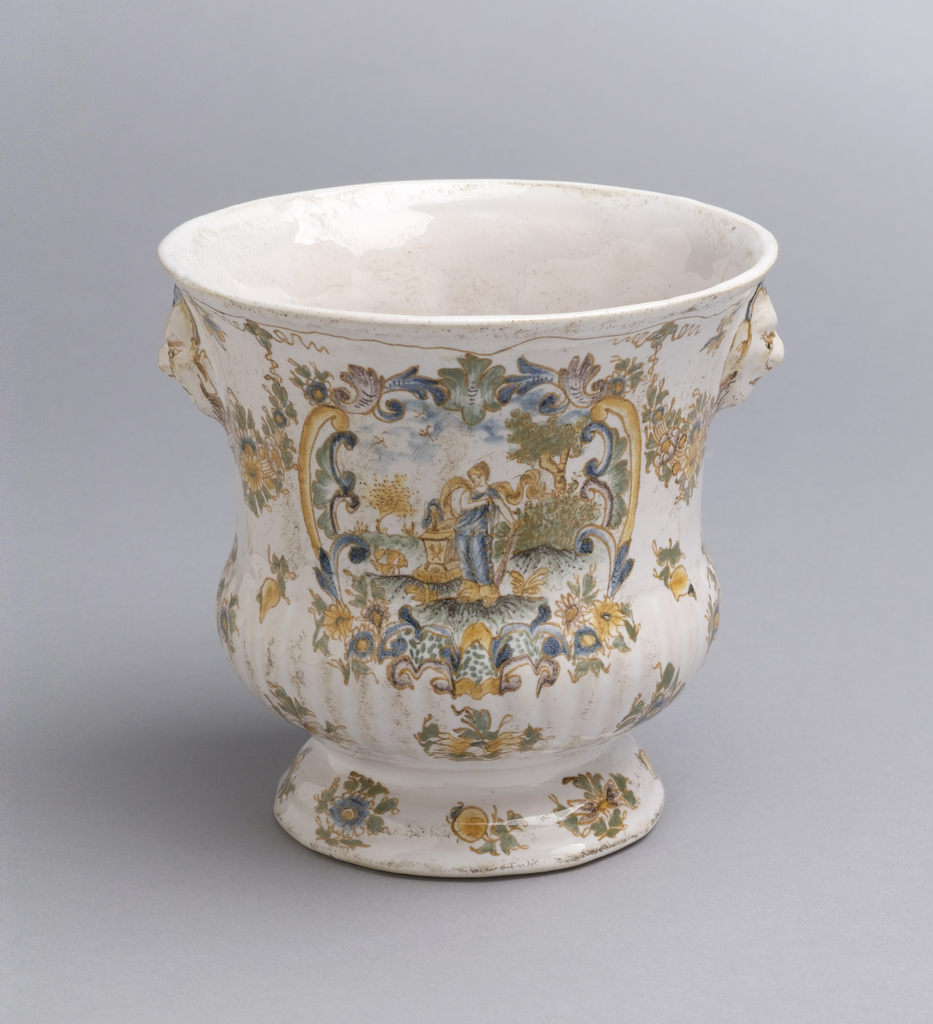 This Jardinière was made of faïence, the French term for tin-glazed earthenware based on the name of a town in Italy-Faenza, with which its production is associated from the Middle ages and before. This example is from Moustiers, France, a town in the Alpine area in the southeast of France, where faïence has been made since at least the 16th century.

The dynastic families of Clérissy, Olery, and Laugier grew to flourish in the production of high- and low-temperature fired earthenware of especially artistic creativity in the late 17th and 18th centuries. A monastic Prior and economist of Italian origin, Lazzaro Porri is thought to have brought the formula for tin-glazed enamel to the Clérissy family in 1671. Artistic creativity and an increasing range of coloration developed during the 18th century.

The tin glaze makes the earthenware less porous, adds strength, and enables the piece to have a lustrous shine that seeks to evoke porcelain.  The “secrets” of porcelain production were newly discovered in eighteenth century Europe, and only the wealthy could afford to import it or commission special pieces.  The idea of color on the table led to a broader market by makers who tried to replicate the effect by using humbler materials. But, this did not mean that the factories were bereft of design sources. They used printed books and circulated engravings to provide a story – such as in the cartouches on the side of this plant holder, alongside cheerful swags of flowers and other motifs that often help identify the specific factory.

Certain motifs and colors are associated with Moustiers and its environs. The use of green and yellow is especially strong in the Olerys factory, from which this may originate.  The Clerissy factory, one of the earliest, replicated the taste for blue and white from China,whereas this jardinière refects the colors of the garden. These decorated ceramics are known to have been sought after in their day, and the pride in making them is evident in the signatures often gracing the wares and by the industry that ultimately fluoresced  to both continue and imitate the styles .

This piece is part of a substantial gift of Moustiers ceramics, almost all from the 18th century, from the collection of Eugene V. and Clare E. Thaw.