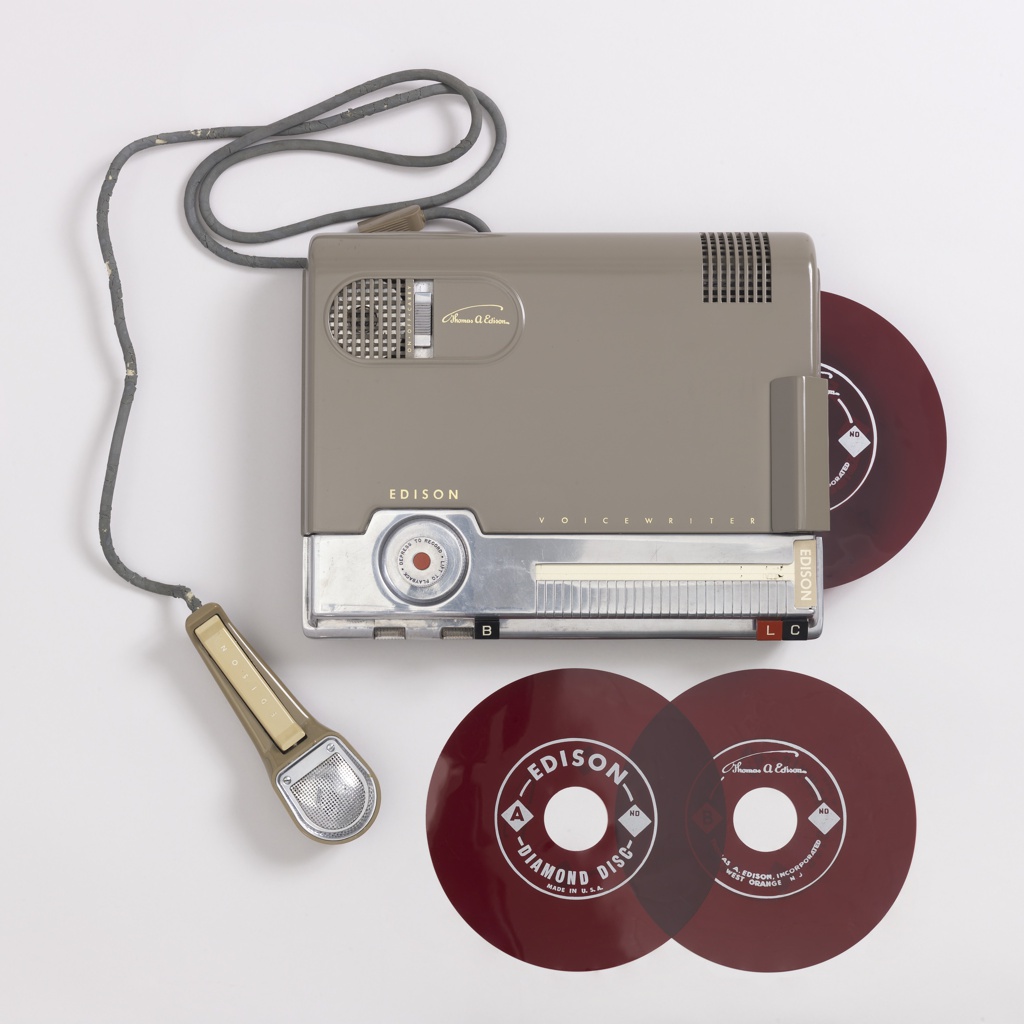 This Voicewriter dictation machine, commonly known as a “dictaphone,” was produced throughout the 1950s by Thomas A. Edison, Inc. The 1953 model in the Cooper Hewitt’s collection represents one moment in the long evolution of the dictation machine, which began when Edison invented the phonograph in 1877. The inherent competition to dictation machines, in the form of the pesky human stenographer, complicated by the pressure of growing markets for recording devices of all kinds, led to rapid technological advancements in this arena during the mid-20th century.

Workplace productivity was always the primary concern of dictation machine manufacturers, beginning with Edison and his original phonograph. 1950s advertising campaigns for the Voicewriter make the enticing suggestion that the dictation machine, could be the answer “when you need more minutes in your workday.” The Voicewriter promised office workers the ability to record and convey important information at high speed and low cost.

Message clarity was paramount in order for the dictaphone to support the modern businessperson. One common barrier to clarity was the malleability of the material used to capture the sound waves created by the user. Dents and dings in the substrate, often wax, could reduce the quality of the recording. The Voicewriter stood out for its solution to this problem: the Diamond Disc, a 7-inch red plastic disc that replaced the wax discs and tinfoil sheets with which Edison had been experimenting previously. (One fascinating fact from the dictaphone’s origin story: Edison thought the flexibility of tin foil would allow users to send the “first voice mail” by folding up recordings and sticking them in mailing envelopes.) The rigid plastic of the Diamond Disc could withhold the test of time on a messy desk or in a pocket. Even better, recordings on these discs could be played back on a gramophone as well as on a Voicewriter itself, affording users a much broader group of potential recipients.

A big part of the dictaphone’s appeal was that it could do all of this work without a middleman — or, more likely, without a middlewoman. Dictaphones of this period, like the Voicewriter, entered an office world in which the stenographers they replaced were primarily women. It’s interesting to note that today’s digital versions of the dictation machine (think Siri, Cortana, and Alexa) haven’t strayed too far from this outdated norm.

One thought on “Take a Memo”

We are very pleased to see this posting on the Cooper Hewitt site! It helps us whenever we as archivists come across this format and need to explain the Edison diamond disc to a client or if we familiarizing an entry level archivist with an Edison diamond disc. Into the 1960’s the diamond discs were used to store radio soundbites or to record prior to being transferred to a tape. In a July 2, 2013 post on the Association for Recorded Sound Collections listserv Michael Biel stated that in the 1960’s many businesses and government offices still preferred thse discs to magnetic media because they couldn’t be erased.