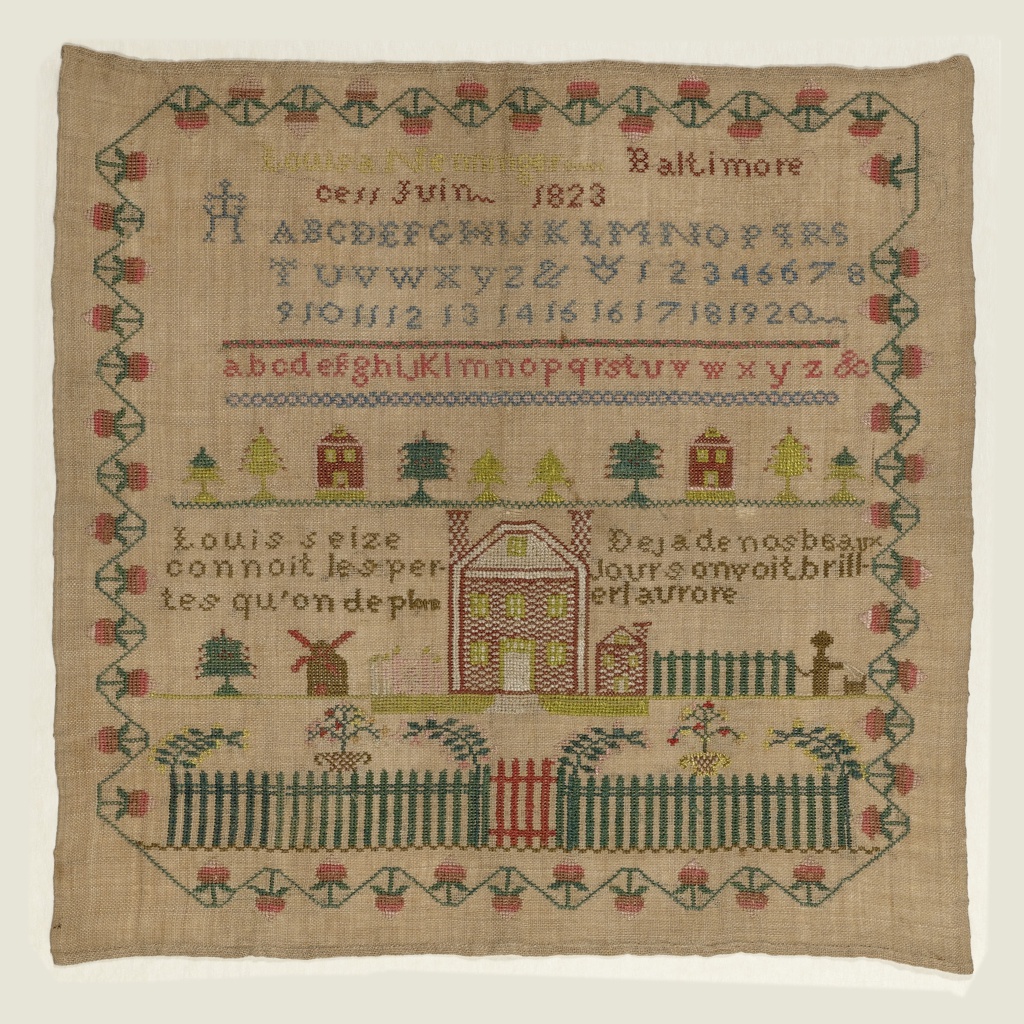 French-speaking Catholics, fleeing the bloody revolutions in France and the Caribbean, settled in large numbers in the Baltimore area. In 1791, priests from the Parisian Society of Saint Suplice established a seminary in west Baltimore conducting religious services in French, and it soon became the center of a rapidly-growing French community. Among the émigrés, both black and white, were many who had been educated in the best schools in France or the Caribbean. Several opened schools which offered instruction in their native language, to serve the growing number of immigrant children who spoke no English. Others offered instruction in both English and French, as speaking French correctly was considered an important accomplishment for a young lady.

Louisa Nenninger was the daughter of Frederica Kohlstadt and John Nenninger. While her parents’ names suggest German ancestry, Louisa worked her sampler in a French school.  It may have been that of Miss Emma Marcilly, an emigre from Saint Domingue.  The school was near the house where Louisa lived with her family, and boasted in ads of “Miss Marcilly’s thorough acquaintance with the French language.”  Louisa’s father, a professor of music, was employed by Mrs. Nimmo to teach piano, harp, and guitar at her school, so alternatively Louisa may have been permitted to study there through her father’s connection. The first line of text on her sampler, “Louis seize connoit les pertes qu’on deplore,” refers to the execution of Louis XVI during the French Revolution. The second, “Deja de nos beaux jours on voit briller l’aurore,” may reflect the restoration of the Bourbons to the throne, with the return of Louis XVIII from exile (he ruled from 1814 to 1824).

Some years later, Louisa married schoolteacher Richard Connelly (b. ca. 1806) in Baltimore on December 2, 1841. They had three children: Louisa, Amelia, and John, and a second son, Richard, who died in childhood.  By 1870, Louisa was widowed and living in Brooklyn, New York.

← The Coolest Spot in New England
All Wired Up →