The Coolest Spot in New England 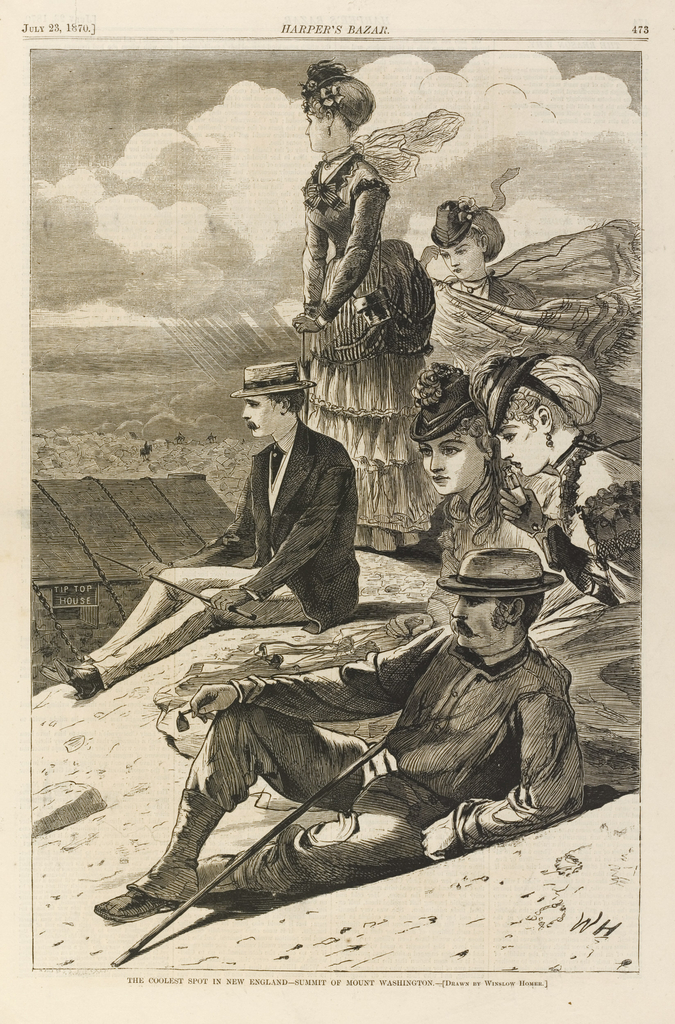 Seeking a way to beat the heat of summer while still looking cool? This 1870 print after a drawing by Winslow Homer suggests that more comfortable climes may require a bit of a climb. In this scene, a group of well-dressed urban men and women take in the views at the summit of Mount Washington, the tallest peak in the Northeast at 6,288 feet. In addition to expansive views of the White Mountains, the summit also offers a promise of cool weather. Both the billowing hats and scarves of the women in this group as well as the rainstorm in the background refer to Mount Washington’s reputation as the home of the worst weather in the world—the summit’s average summer high temperature is only 52 degrees Fahrenheit.[1]

By 1870, Mount Washington was also a site of growing tourism, and this illustration captioned “The Coolest Spot in New England—Summit of Mount Washington” was undoubtedly intended to promote interest in regional tourism amongst the many readers of Harper’s Bazaar. If you’re wondering how such a fashionable group survived the journey up to the peak, they might have arrived as passengers on the world’s first cog railway, which opened in 1869 to offer transportation up and down the mountain and which is still in operation today. These sightseers could also have been guests at the Tip Top Hotel, visible at the left, whose business success would bring other larger hotels to the summit that could accommodate the growing numbers of regional tourists seeking to experience the country’s natural wonders.