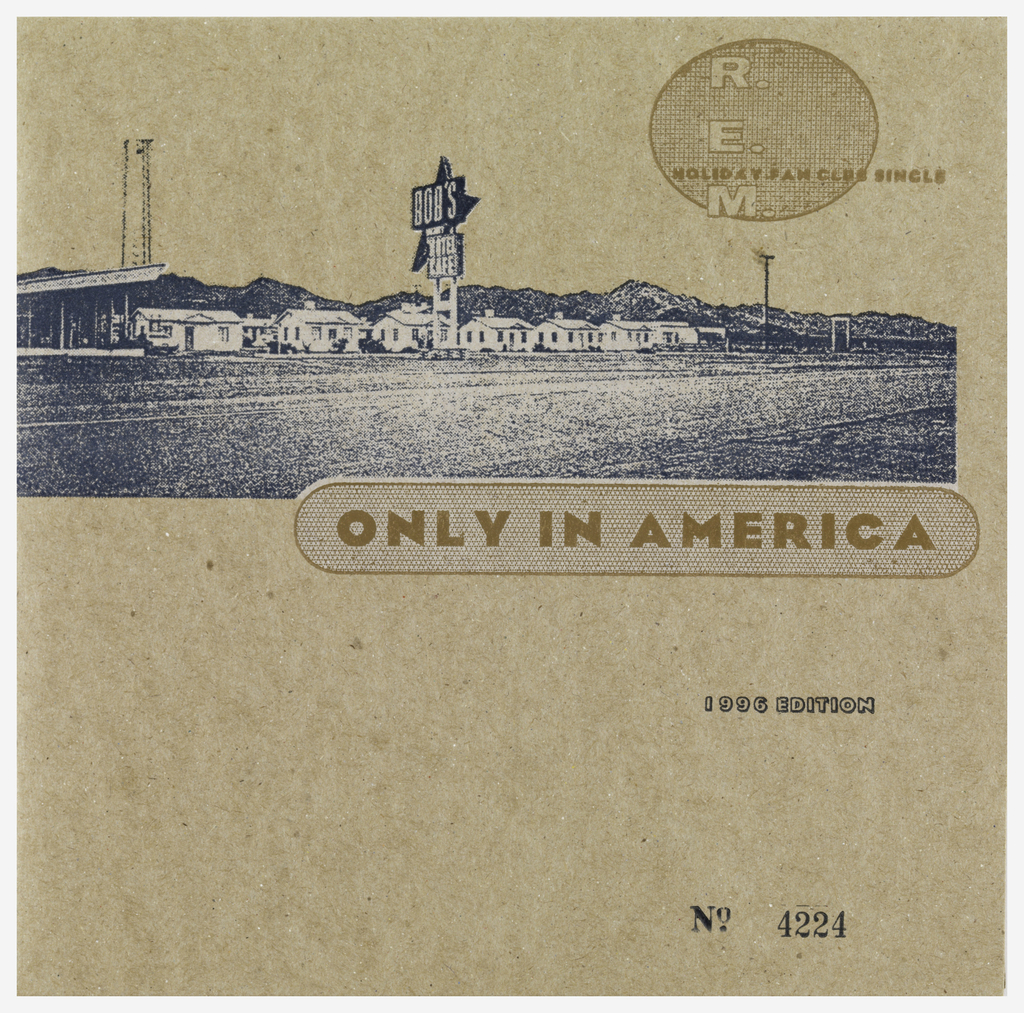 An altered photograph of a roadside motel is printed on a cardboard sleeve for R.E.M.’s 7-inch single “Only in America,” designed by Bruce and Karen Licher. The image of the motel is grainy, which complements the speckled cardboard on which it was printed. Although the grain makes it harder to read the motel sign, the motel itself is well-known. In fact, Roy’s Motel & Café is actually a United States National Historic Landmark. In this lithograph, only two colors of ink are used. The simple two-tone combination of a blue graphic with brown text creates a palette that is plain and subdued, mirroring the barren landscape of the Mojave Desert where the original photo was taken.

Although the R.E.M. release depicts a name change from “Roy’s” to “Bob’s,” the architecture is unmistakable. First opened in 1938, it was not until 1959 that Roy’s Motel acquired its immediately recognizable sign and its inclined roof above the reception office. Together these features have made Roy’s Motel a prime example of mid-century modern Googie architecture. Googie is a post-WWII architectural form known for embracing the Space Age with sharp angles and colorful neon signs. Googie architects turned to jets and cars as a source of influence. Roy’s Motel is noteworthy not only for its architecture, but also for its location in Amboy, California along the original Route 66 Highway. In its heyday, Route 66 was sometimes called “the Main Street of America,” so the fact that Bruce and Karen Licher chose this image to accompany R.E.M.’s song “Only in America” is deliberate. In the song, lead vocalist Michael Stipe sings “only in America can a guy from anywhere go to sleep a pauper and wake up a millionaire.” On paper the line might seem sincere, but when one hears Stipe deliver the line with no enthusiasm, it makes the song sound more like a critical commentary on the American dream. When California’s I-40 highway opened in 1972, businesses along the original Route 66 were completely bypassed, and in 1985, Route 66 was officially removed from the United States Highway System. More than a decade later, in 1996, Bruce and Karen Licher created this design with the nostalgic motel image. The decision to accompany the capital lettered text ONLY IN AMERICA with a gritty, faded image of a forgotten motel and gas station is funny and it carries the same ironic tone of the song.

There is both musical and visual continuity between both sides of the single. On the back cover, the colors of the front are essentially inverted. The cover features a blue photo with brown text while the back features a brown photo and green text. Side B of the single is an acoustic recording of Michael Stipe singing Gloria Gaynor’s song “I Will Survive.” About a minute into the recording, Stipe forgets the words and says “that’s all the words I know.” Stipe’s mistake-laden recording of “I Will Survive” on Side B can be thought of as an answer to the questions posed on Side A in “Only in America.” In the same way that Stipe intended to draw connections between both songs, the Licher design creates a visual dialectic between both sides of the cardboard sleeve. Not only are colors flipped in terms of graphics and text, but the front cover features an image of human settlement and entrepreneurship while the back features a natural photograph of trees, with the word survive partially superimposed atop the photo.

An emblem on the front cover reads “R.E.M. Holiday Fan Club Single,” as the recording was released in December to members of R.E.M.’s fan club. Fittingly, the folds of the cardboard were glued to the outside of the sleeve, making the record look like an envelope or some kind of mailing parcel. In this way, the physical design of the sleeve reflects the postal nature of many ‘90s music fan clubs.