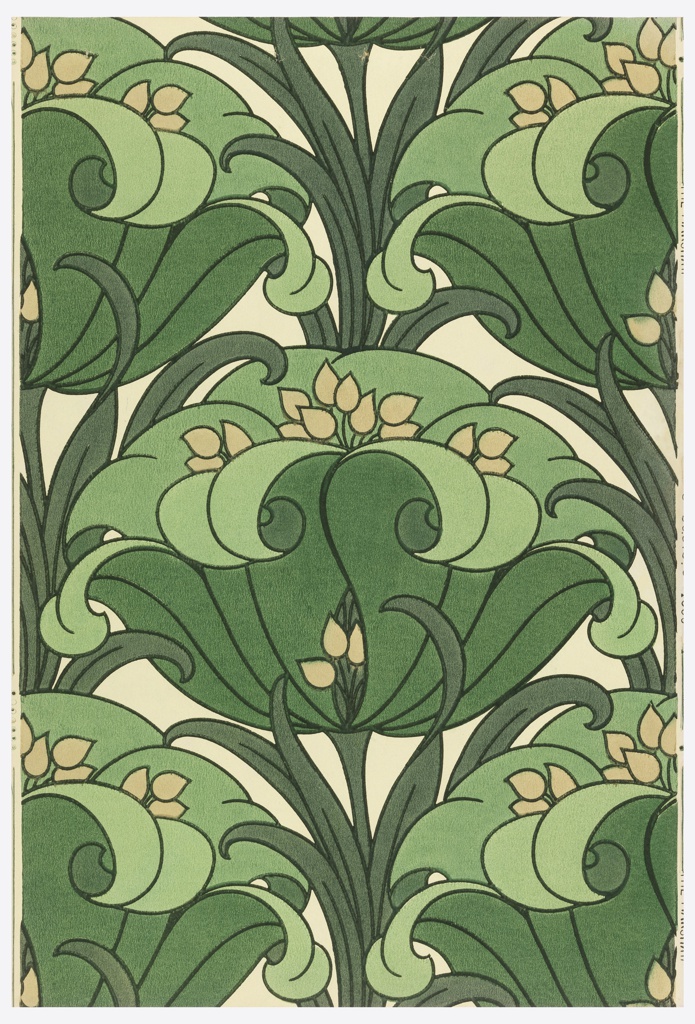 This wallpaper was once part of a showroom sample book that was unbound at some point and then later donated to the Cooper Hewitt. The samples are a nice group of art nouveau and Mission-style wallpapers. This paper is a good example of American art nouveau design with its large-scale floral motif filling the width of the paper. There are no highlights or shadows to suggest depth, and each of the different elements is outlined in black which further flattens the design. However, the overlapping of certain elements does impart a very shallow sense of depth. Earthy colors such as green, brown and tan were popular in the early years of the twentieth century, as were blue, red and mauve. It was quite common for wallpapers at this time to contain deeply saturated colors, due in part to the discovery of synthetic dyes a few years earlier which greatly lessened the cost of printing colors. This design was machine-printed with rollers which impart a certain texture to the pigment which adds to the organic nature of this design.

As bold as this pattern is it would have been hung over another wallpaper of a simpler nature, either a tone on tone stripe design or a plain ingrain or oatmeal paper. Ingrain papers are colored in the pulp stage which creates some irregularity in the surface coloring. Oatmeals are similar with the addition of sawdust or other bits that create a little more texture.

This wallpaper design is on view in the Cooper Hewitt’s Immersion Room where it can be viewed full-scale and in repeat.

← May Designgrams
Made By Many Hands →