Marilyn Monroe on a Roll, Literally 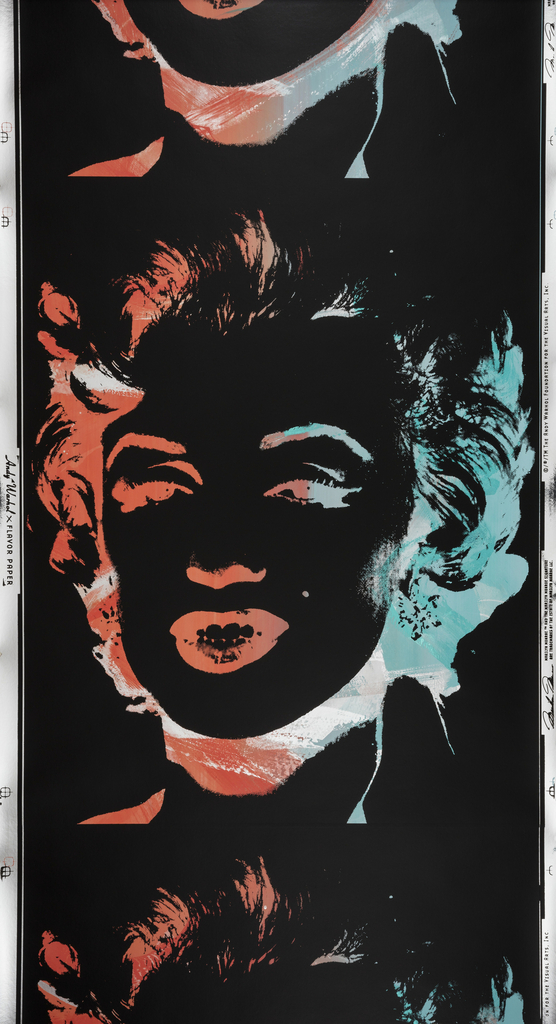 Featuring the familiar image of Marilyn Monroe this wallpaper is drama on a roll, and another recent acquisition to the museum’s permanent collection. Working with the Warhol Foundation, Flavor Paper was able to sort through original Warhol documents to find inspiration for an exciting collection of wallpapers, making Marilyn available as a wallpaper for the very first time.

The Marilyn Monoprint was inspired by the Reversals Series of paintings Warhol began making in 1979, where he reused a publicity still of Marilyn Monroe from earlier paintings but reversed the tonal values, so it was like looking at a photographic negative. Warhol hand painted the canvases with seemingly random brush strokes of intense color, then printed the black facial silhouette on top. Warhol’s Reversals of Marilyn Monroe could contain from one to as many as forty Marilyns. Each painted background was unique, while the printed facial images were similar but could vary depending on the amount of paint used and pressure applied when printing.

Flavor Paper has taken a very hands on approach to keeping the Warhol “look” while still making the design their own, recreating the original concept entirely as a screen print and putting it in repeat. Where Warhol hand painted colors on the canvas, Flavor Paper has perfected a technique where they apply paints directly on the screen, which requires the coordinated effort of a team of artists to apply the colors quickly with some manner of continuity, and then printing before the pigments dry. This process is replicated for each repeat of the wallpaper, with the Marilyn silhouette then printed over top. Similar to the Warhol paintings, there is continuity between the repeats but each is unique.

Marilyn Monoprint joins other Flavor Paper wallpapers in the collection, including Cherry Forever, the first commercially produced scratch and sniff wallpaper from 2007. Marilyn Monoprint is now available for viewing in the Cooper Hewitt’s Immersion Room.

← The Modern Chair. Redefined.
House And Trees Within A Border →