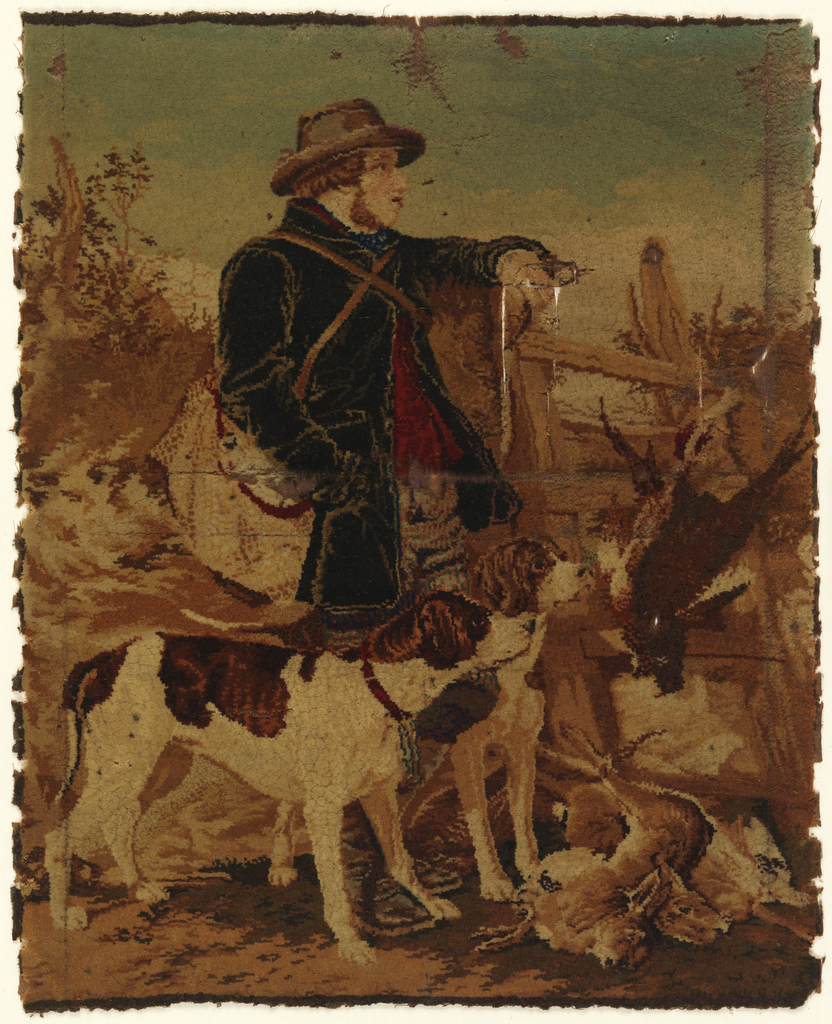 By the middle of the nineteenth century the Industrial Revolution was in full swing. British manufacturers of all kinds developed innovative techniques to produce goods for an ever-growing global consumer base. Many successful companies developed artistic sidelines that utilized their established resources in experimental ways.

John Crossley & Son was one of the largest carpet manufacturers in the world. Their Dean Clough mills were located near Halifax, Yorkshire in the heart of the English woolen industry. The success of the Crossley family’s manufactory was largely due to their patronage of George Collier, inventor of the steam-powered loom for weaving tapestry and carpet. With mechanized production underway, the business expanded to include experimental products such as ‘mosaic tapestries’ which were produced by the company between 1850 and 1869. The Cooper Hewitt example shows a game keeper with two hounds and a pile of game at his feet.

The tapestries were described as mosaics because the picture is formed by the end view of a large number of wool threads that had been glued to a piece of linen and cut in cross section. To create a mosaic tapestry, the design pattern was placed within a timber box frame with vertical metal wires. Worsted wool threads were knotted to the wires and held in place with metal rods and wood sheeting, displaying the warp ends in thick pile. A piece of linen spread with adhesive would be fixed to the top threads. When dry, a guillotine was used to cut a 4mm slice that revealed the complete picture. Up to 950 tapestries could be produced from one setting of yarn, with the option to show the positive or the reverse.

For subject matter, the company reproduced popular artists of the period, including Richard Ansdell and Edwin Landseer. The English Gamekeeper was first exhibited by Ansdell at the Royal Academy of Arts in London in 1855, along with its pendant painting The Scotch Gamekeeper. John Crossley & Sons presumably drew their tapestry designs from subsequent engraved prints, such as those produced by Frederick Stacpoole in 1858.

John Crossley & Sons exhibited their mosaic tapestries at the 1851 Crystal Palace Exhibition in London; the company occupied carpet stall No. 142 in the South Central Gallery. Their entry in the official catalogue reads, “Patent mosaic tapestry for the walls of dining-rooms; for carpets and table-covers; and for covers for sofas and chairs.”[1] The company exported goods to the United States. In New York, mosaic carpets could be purchased from the retailer Hiram Anderson, located at 99 Bowery.[2] The Crossley Company’s last printed reference to mosaic rugs appears in a price list dating to January 4, 1869. Both the English Game-Keeper and ‘Scotch ditto‘ appear on this list.

← The Art of Shopping
Dressing the Part →