The Art of Shopping 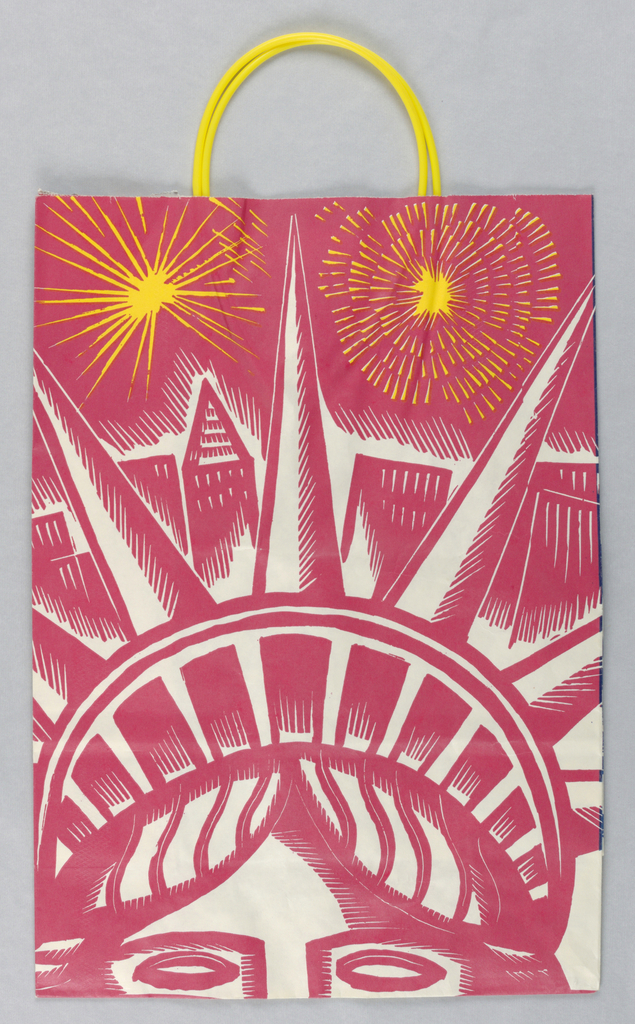 Buy something at Bloomingdale’s, and you’ll likely receive one of three different brown paper bags: little, medium or big, depending on the size of your purchase. Spelled out in iconic sans-serif, these size classifications are the classic bags’ only adornment. This striking, simple design, created by Massimo Vignelli in 1973, has seen huge success as an advertising campaign, and even inspired popular spinoff products .The “big brown bag” was the first generation of the series, produced in order to accommodate large household products such as linen and pillows. In response to its instant popularity, little and medium bags followed to complete Bloomingdale’s brown bag trinity.[1] However, the history of Bloomingdale’s paper bag started much earlier. In fact, Bloomingdale’s is a pioneer of shopping bag culture in America. The first Bloomingdale’s shopping bag appeared in 1922 . It bore an anniversary message thanking loyal customers. Executives quickly realized the promotional potential of these bags, and used them to develop a new marketing model.[2] Bloomingdale’s has since produced a variety of paper bags, which have been serving shoppers and brightening New York streets for generations. The bags produced between 1979 and 1993 are especially notable in the store’s history. During this period, the store turned paper bags into canvases, and commissioned popular designers and artists to experiment with them. “I wanted each bag to be a statement of the times,” then creative director John Jay said in an interview with the Smithsonian.[3]

The bag above, illustrated by Anthony Russo in 1986, is a great example that embodies the energy of New York City. Viewed through the spikes of the Statue of Liberty’s crown, iconic skyscrapers reach toward a sky alight with fireworks. The bag’s dynamic composition and invigorating pink and yellow palette create a festive mood. The Japanese graphic designer Kazumasa Nagai designed a more traditional bag in 1985. Its coloring evokes black lacquerware with gold adornment. Yellow lines spreading across a red field create an ambient glow. The scene is reminiscent of a rising sun—a symbol of Japan, tied to the etymology of the country’s name. The American architect and product designer Michael Graves created an illusionistic design for his Bloomingdale’s bag. One viewer might find a carved glass in the middle of the bag, while another might only see two potted shrubs side-by-side. This interplay of graphic elements is certainly evocative of semiotic motifs which recur throughout his work. Bloomingdale’s bag commissions from the 1980s and early ‘90s not only reflected cutting-edge trends in contemporary design—they also encouraged customers to engage creatively with the store. These portable canvasses turned city streets into a public gallery space, where the art of shopping was celebrated.

[1]  “The Most Famous Shopping Bags in the World,” Bloomingdale’s, accessed February 22. http://www1.bloomingdales.com/about/company/press/detail.ognc?newsID=71

2 thoughts on “The Art of Shopping”

Our Conpamy, Modern Arts has an extensive
collection of historical paper shopping bags.
I would like to know who to contact to
explore mutual benefits.

I have many of the BloomingDales shopping bags I have collected in most occasions in excellent conditions and would like to share the ones I have and also view other collections of BLOOMINGDALES bags I do not have. They have always fascinating the most of the art in each one that I have seen. But my interest in knowing more about BLOOMINGDALES Artists in theses bags is something I would love to explore