Sensing a new spirit of Japan 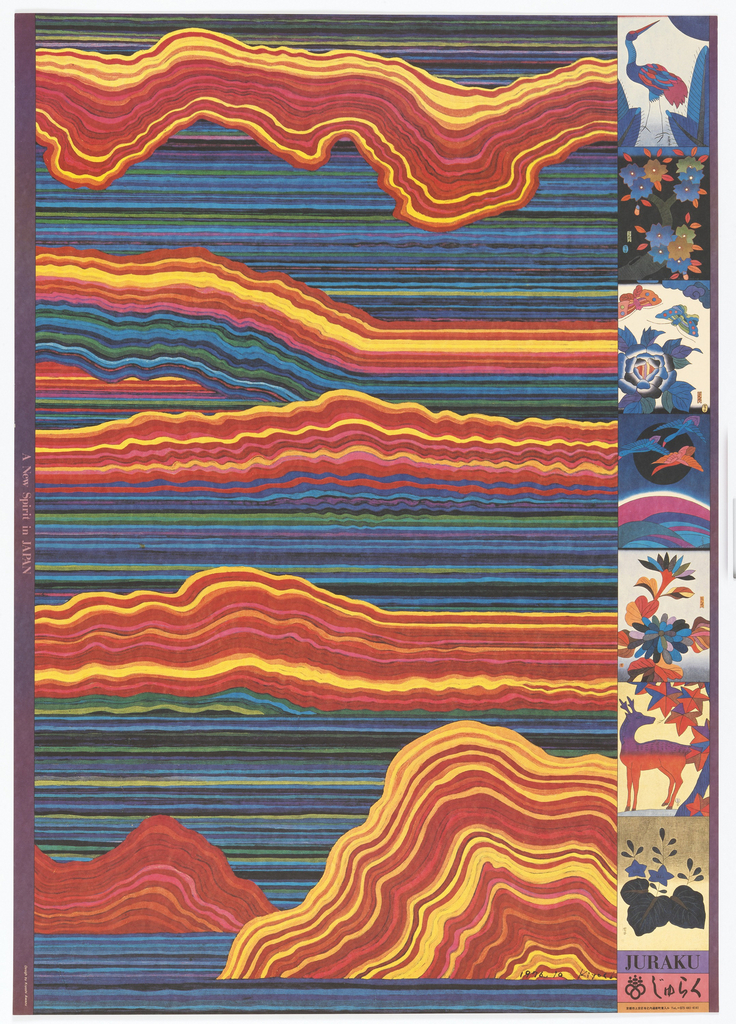 When it comes to Japanese graphic design, a certain set of visual elements are conjured in one’s mind. Simplified forms; a minimal color palette, the generous use of negative space; an effective use of black; and unique lettering, are all characteristic elements that draw on the aesthetics of Zen culture, Japanese Buddhism, calligraphy, ukiyo-e woodblock printing and kimono design. In this sense, this poster by Kiyoshi Awazu is, at first glance, unconventional and unexpected, because there is no distinct characteristic that one can easily associate with typical Japanese graphic design.

This poster was produced to promote the creative collaboration between Awazu and the Kimono company Juraku. The text written on the left edge of the poster reads, “A New Spirit of Japan,” indicating the concept for this collaboration. Awazu, who was well known for his experimental approach to graphic design, integrated his avant-garde artistry with the aesthetics of traditional craftsmanship to foster a new aesthetic for kimono-related products. This encounter between old and new is explored visually and conceptually in the poster.

Many of Awazu’s poster designs primarily consist of elements from his earlier artworks, and this poster is no exception. The image on the left is a painting he created in 1976. The illustrations laid on the right edge were selected works from his woodblock prints series produced in 1981.[1] Awazu called this production method, in which elements from previous work are combined together, “graphism.”[2] He felt that this style of working was on par with producing a work from scratch.

Awazu’s interest in imagining traditional aesthetics through a contemporary lens is quite clear in this poster. The illustrations on the right edge are based on images on Hanafuda, traditional Japanese playing cards, seen above. The designer intentionally scaled the Hanafuda down dramatically to obscure the “Japaneseness” of the imagery. His reinterpretation of the illustrations on Hanafuda also complicates the viewer’s ideas about conventional Japanese aesthetic traditions. The color palette used in Awazu’s Hanafuda illustrations is more complex and atmospheric than the traditional imagery. On the bottom right, small letters written in Hiragana, the basic Japanese phonetic script, are evocative of Japan, but allude to it in a very subtle manner.

Through this indirect allusion to “Japaneseness,” Awazu tried to explore a new way to visualize Japanese aesthetics. The major part of the poster which is layered with multicolored lines also takes on an important role in highlighting this quality. Several waves of winding and curving lines, rendered in vivid color, add a great sense of motion to the poster. If one thinks the aforementioned characteristics of traditional Japanese graphic design create “stillness,” this lava-like image must be its polar opposite, conveying to viewers the dynamism of an emerging power. In this poster, newness and oldness are not competing but melded into one work through Awazu’s unique vision of a new spirit of Japan.

Sakura Nomiyama is a student in the MA program in the History of Design and Curatorial Studies program offered jointly offered by the Parsons School of Design and Cooper Hewitt, Smithsonian Design Museum. She is a curatorial intern in the Drawings, Prints & Graphic Design Department of the Museum.

[1] The series of woodblock prints titled Reflections on Japanese Playing Cards was produced under the commission by the Adachi Institute of woodcuts prints. “The Traditional woodcut Print Meets the Contemporary Artist” was the concept of this creative venture.

[2] Ibid., 4.
Awazu produced a large number of paintings using colored lines in the 70s as in the poster, and these works are often appear in his graphic works produced in the 80s.

← In Memoriam
Embroidering the State →