We All Scream for Ice Cream Packaging 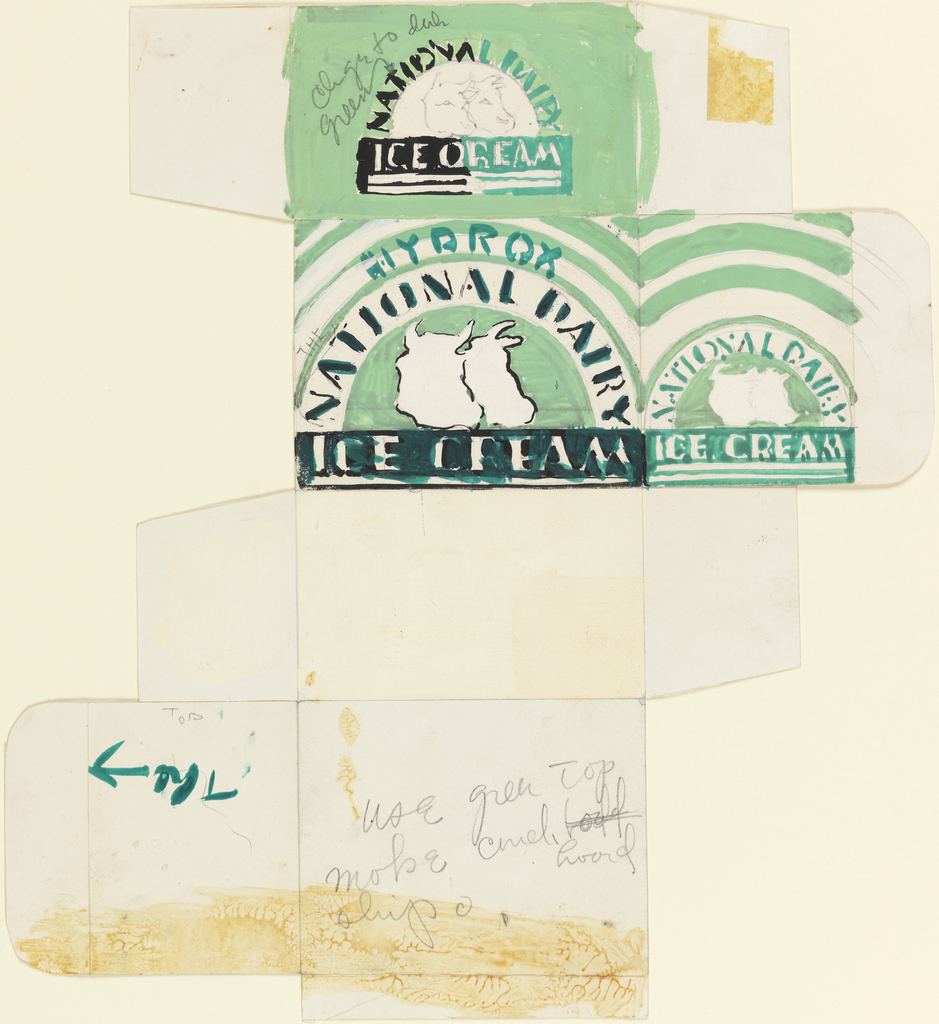 Posted by Rachel Hunnicutt on February 18, 2016

The prolific industrial designer Henry Dreyfuss (1904-1972) is one of America’s most important industrial designers. He produced a number of the twentieth century’s most iconic designs, including small scale objects such as the Model 302 telephone and Honeywell’s T-86 thermostat as well as monumental works like the Twentieth Century Limited, a new locomotive whose streamlined exterior casing and comfortabe modern interiors were both designed by Dreyfuss.[1] He typically avoided graphic and package design projects,[2] but in the early years of his practice he created a series of ice cream package designs for National Dairy Products Corporation, then the world’s largest dairy company.

The design featured here is irregularly shaped to fold into itself, forming a rectangular carton. The primary graphics are drawn first in pencil, then articulated in watercolor and gouache, consisting of a bovine duo, below whom “ICE CREAM” is lettered and underlined for emphasis. Above the pair, “HYDROX” and “NATIONAL DAIRY” assert the manufacturer and brand names, and aqua semi-circles radiate outwards, diminishing in scale and wrapping around the package’s corners. Dreyfuss tries several variations on this theme on the other planes of the package, using the same aqua hue, as well as dark teal and black, as he works and re-works the design. The designer reflects on the design, leaving notes in pencil which manifest in a later iteration of this design, also in Cooper Hewitt’s collection.

Dreyfuss’s design typifies ice cream packaging in the 1920s and ‘30s. Industrially manufactured ice cream was run through a continuous freezing machine and deposited in rectangular molds to form bricks. The bricks passed through an automated packaging machine to be wrapped in paraffin-lined paper cartons.[3] Shoppers could pick up their favorite flavors at the corner drugstore, ice cream parlor or market, ready to be sliced and served or stored.

For reasons unknown, Dreyfuss’s ice cream package designs for National Dairy never went into production. Nonetheless, they offer a glimpse of the sweeter side of the designer’s oeuvre, and help illuminate ice cream’s place in America’s foodways and freezers.