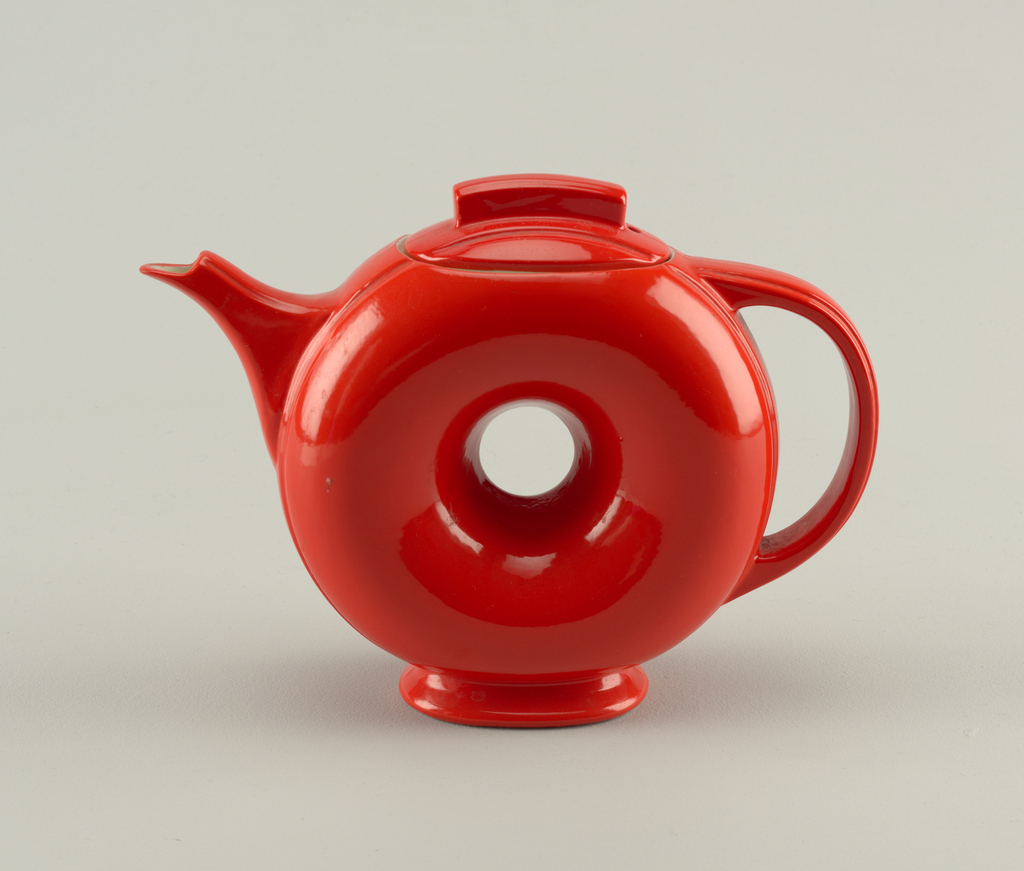 Posted by Catherine Acosta on February 6, 2016

Conjuring up the round abstract shapes and bold colors of Alexander Calder’s hanging mobiles and graphic work, this teapot’s unique shape stands out amongst many of the teapots created by the Hall China Company during the 1930s and 1940s. Making its debut in 1938, the Doughnut teapot was one of several novelty designs created by the Hall China Company of East Liverpool, Ohio. That same year, Hall also debuted its curvilinear Airflow teapot and introduced other novelty deigns such as the Football and Basketball (also known as the Bull’s Eye). The novelty series continued over the next few years with other shapes like the Automobile and Birdcage.

The Doughnut was made in several colors and occasionally adapted for existing patterns with the addition of a decal, such as the Orange Poppy dinnerware line, originally introduced in 1933. This adaptation also made the Doughnut appear less abstract—making it more marketable to middle-class consumers. The Doughnut originally retailed for $1.50 and is similar to Hall’s Doughnut jug of the period.

The company began in 1901 as the result of the disbandment of several small potteries in East Liverpool. It wasn’t until the 1920s that Hall began producing teapots. The company was successful with its Gold Decorated line of teapots in the 1920s and has been producing teapots, dinnerware, and commercial wares ever since. Today Hall operates under HLC, inc., beside Homer Laughlin, the manufacturers of Frederick Hurten Rhead’s iconic Fiesta Ware. Like Fiesta Ware, the Doughnut was officially reproduced in the 1970s, 1980s, and 1990s, but with marks that clearly identified the pieces as reproductions.

← An Elegant Duality
Day and Night →

One thought on “The Doughnut”

Dear editor,
I teach ceramic in Thailand and write a book for students now. May I use a Doughnut Teapot photo in my book and put all credit and reference?
thank you very much
Tuk