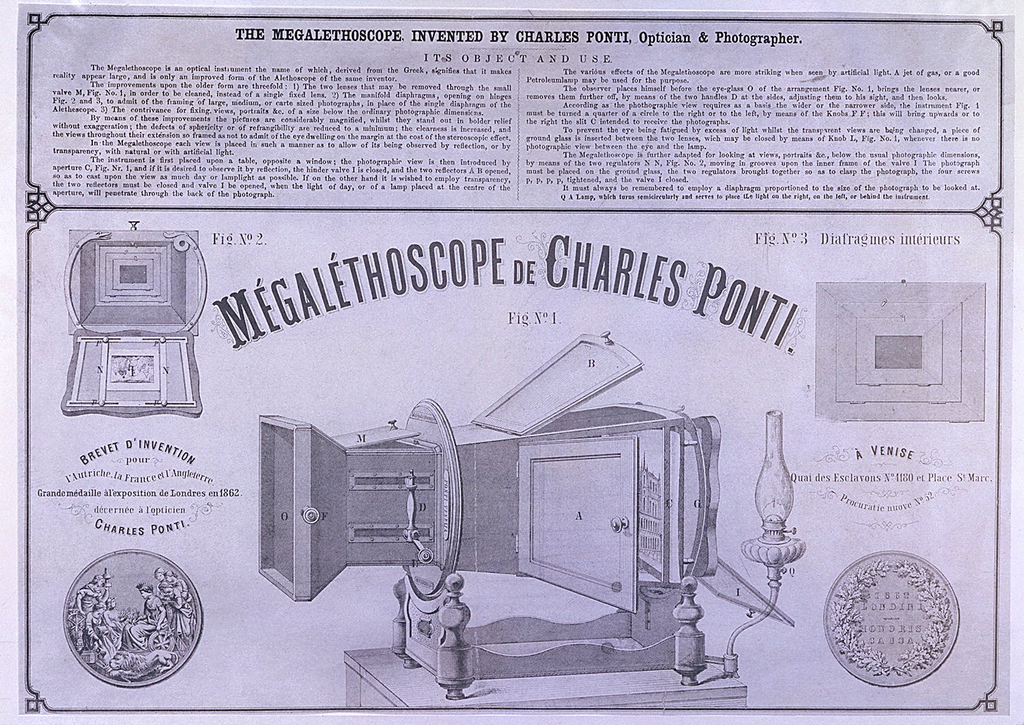 During the mass digitization project at Cooper Hewitt, Smithsonian Design Museum, which has been under way for the last year, twenty Megalethoscope plates of unknown origin were discovered in our storage facility. The Cooper Hewitt’s Drawings, Prints, and Graphic Design department collection contains a photostat of an advertisement from the early 1860’s that illustrates the then-revolutionary capabilities of Megalethoscope technology.

The Megalethoscope is an optical device invented by Carlo Ponti, a Swiss-born optician and photographer who studied photography for eight years in Paris before settling in Venice in 1854. Ponti first created a device called an Alethoscope in 1860, for the viewing of prints and photographs. The Alethoscope was used to view photographs that were specially prepared and mounted on a curved wooden frame, and showed day-and-night effects by viewing with either reflected or transmitted light.

Ponti was reknowned for his lenses and his series of photographic albums, “Ricordi di Venezia.” He actively edited and published the work of other Venetian photographers as well as his own throughout the 1860’s. Due to administrative confusion during the Austrio-Prussian war and the Peace Treaty of 1860, Ponti lost his copyright and his collaborator Carlo Naya began producing the Alethoscope under his own name. Ponti tried unsuccessfully throughout the remainder of his career to regain his exclusive right to the invention, and died in 1893, completely blind.[1]

The Megalethoscope is an enlarged version of the Alethoscope, in which photographs are viewed through a large lens, which creates the optical illusion of depth and perspective. Ponti and others produced specially prepared photographs in which pin holes, scratches and colored paper additions have been made on the albumen prints which are barely visible from the front. To view them with full effect, photographs for the Megalethoscope are constructed with several layers, mounted on a curved wooden strainer:

This creates dramatic day and night light effects, depending on the placement of the light source. When the top of the Megalethoscope is open and light hits the front of the image, we see a daytime scene. However, closing the top and using back lighting, we see the impression/illusion of nighttime[2]. The Megalethoscope plate “Panorama di Napoli dal Vomero” (Panorama of Naples from the Vomero), one of the objects found in Cooper Hewitt’s storage during the digitization process,  is a well-known view of Naples. A similar image was taken by photographer Giorgio Sommer, circa 1870, held in The J. Getty Museum collection. Institutions containing Megalethoscope plates in their collections include The Getty, The George Eastman House and Firestone Library, and the Princeton Library.

Dong Eun Kim is currently working as a paper conservator for the Cooper Hewitt mass digitization project. She has formerly done photo and paper conservation work for the Yale center for British Art, Whitney Museum of American Art, The Morgan Library, and the Metropolitan Museum of Art.

← The Doughnut
For the Love of Books →

4 thoughts on “Day and Night”

Do you know of anyone who is looking to buy an antique megalethoscope?
Thank you!

Hi, i just saw this posting. Sounds like you had a Megalethoscope to sell. Do you still have it. Jim

Do you have one for sale?

So what happened about the megalethascope anyone find one? Denk