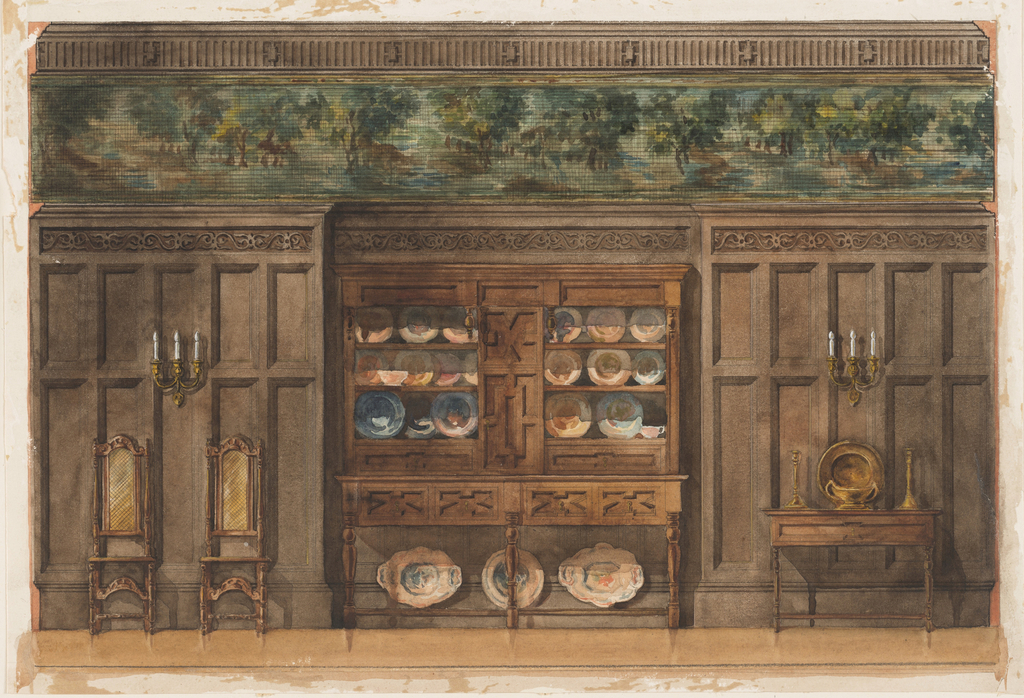 Collegiate-gothic wood panels, a matching china cabinet stocked with warmly tinted salmon and blue plates, a wallpaper frieze evoking an endlessly rolling copse… A pleasing air of big-house formality and anticipated social gaiety pervades this dreamy circa 1909 scheme for a private dining hall. It’s one of the class assignments Izabel M. Coles (1890-1964) completed to earn her diploma at the Cooper Union Woman’s Art College. In 1953, she donated the watercolor to her alma mater with five other examples of her decorative drafting.

Coming of age between Teddy Roosevelt and the Great War, Coles was only 16 when she quit her piano study to prepare for the course in “Drawing from the Antique and Life, and Decorative Design” offered at the institute. A teacher at her high school who’d seen “a sense of color and proportion which ought to be developed” had encouraged her to apply.

After separating from Izabel’s father in the 1890s, Izabel’s mother, Hester, reverted to her family name, Coles — and her daughter followed suit. Mother and daughter moved into the Coles family rowhouse at 29 Beekman Place, where young “Isabelle” (as she was then called) practiced her piano scales. Her forbears had done well in business on Long Island and in New Jersey. Her mother’s father and uncles owned a Hoboken factory that produced most of the school chalkboards in the northeast; her great-grandfather’s rich sister, Elizabeth Underhill Coles, had bequeathed dozens of “modern masters” paintings and Renaissance tapestries to the Met.

With such a pedigree it’s no wonder Coles took to the idea of a career that combined art and commerce. The only question: Which art? As she told a newspaper interviewer in 1928:

“I took every course Cooper Union had to offer. At the time, though, I didn’t have any idea what I would do with it all when I was through. Every one kept telling me that I should concentrate on jewelry designing, because my particular talent seemed to run along the lines of detail and color, but I thought I wanted to do something on a larger scale, such as mural decoration….” [1]

Her first jobs were at a rug company (“for the munificent salary of $5 a week!”) and assisting an interior decorator (“wider scope as well as more money”). She hadn’t put personal adornments out of her mind, however, and sought out Mrs. William H. Klapp, a well-known society jeweler who put Coles to work designing all of her new mountings.  After her employer died, Coles gave interiors a second try—her biggest commission was a pair of Persian-themed panels for a New York home.  Then Tiffany & Company offered her an opportunity to go back to designing jewelry. For eight years she fashioned stock pieces and special orders for the firm, overlapping with Meta K. Overbeck who supervised Louis Comfort Tiffany’s artistic jewelry department.

By 1928, Coles had left Tiffany and realized her ambition to create jewelry tailored to the woman who was to wear it. Back in art school she’d altered the spelling of her own name, from Isabelle to the jazzier Izabel.  As she was fond of pointing out, it was an age of self-expression. She generated traffic for her shop by lecturing about the supposed compatibilities of personality “types” with the gems they wore: “Some people, according to the way I see it, are platinum people; others need gold to enhance their beauty… Certain kinds of stones that are exactly right for some are all wrong for others.”

Plus ça change… Yet the appeal of standing out from the crowd, and access to artisans to carry out those designs, got her notice from Harper’s Bazaar and The New Yorker (“Well worth looking into: Izabel Coles, 19 East 57: Does bits of sculptured flowers and fruits in semiprecious stones…”)[2]

In 1934, Coles teamed up with Beth Sutherland (who’d trained with Ottavio Negri, one of the last master gem carvers in New York) for a joint exhibit of Sutherland’s intaglio portraits and bejeweled frames designed by Coles, at the Berkshire Museum in Pittsfield, MA. The last public glimpse of Coles’ work was a group show of contemporary jewelry organized by the Museum of Modern Art in 1946. Seen alongside works by Anni Albers and Alexander Calder, Coles’ designs—constructed out of enameled safety pins and other practical, everyday material— struck many viewers as both futuristic and primeval (and still do). Coles married a widower in her middle age, and retired to Florida.

Apart from a piece from the Berkshire show (now in the Metropolitan Museum of Art collection), Coles’ output has been difficult to trace. A portion of her jewelry archive surfaced briefly on Antiques Roadshow in 2009 but hasn’t made an encore. How lucky, then, that at the close of a career focused on adorning necks, hands and wrists, Coles remained true to her school—returning her apprentice work so future students could enjoy and compare the historical styles and motifs so entrancing to earlier generations.

Laura Mathews is an editor, researcher, and writer in New York City. She blogs about jewelry history at gustavmanz.com

Readers may also like to know that “Isabelle M. Coles” is listed as receiving her diploma from the Woman’s Art School in Cooper Union Annual Report (June 1912). She received a Silver Medal (top honor) as a Third Year student in Decorative Design and Second Prize ($5) in Decorative Design for the best designs for the corner of a room in perspective, of the Louis XVI period, France.

The 1911 annual report lists Coles as recipient of The Ethel Cram Memorial Fund Prize for the best upright decorative panels in the style of the latter half of the 18th century, period Louis XVI, France. That same year, she also received First Honorable Mention prize in Decorative Design for the best designs of an interior in the style of Robert and James Adam.

← Mad about Printing
Swift as an Arrow →

6 thoughts on “Dining Rooms to Diamonds”

My name is Inmaculada Hurtado Suárez, and I’m doing my doctoral thesis at the University of Málaga, Spain, Department of History of Art. I deal with the subject of women artists and jewelry. Therefore I want to include a mention about Izabel Coles, but I can’t find any bibliography about her, nor pieces in museums.
I’m mainly interested in the pieces made with pins for the 1946 jewelry exhibition at the Moma. Could I talk to you by mail?

I hope you can answer me as soon as possible, and that everyone in your city is in good health and away from the Covid.

Dear Inmaculada,
How wonderful that you are interested in Izabel M. Coles. You are welcome to contact me directly via lmathews212@gmail.com. While I do not have many jewelry images to share, I have corresponded with someone who owns one of Izabel’s safety pin pieces that likely came from the 1946 MoMA exhibit and would be happy to put you in touch with her.
There’s also an intaglio brooch in the collection of the Metropolitan Museum of Art engraved by Beth Benton Sutherland with gold and diamond mounting designed by Izabel and executed by Vincent Provenzano, dating from the late 1930s.
Best, Laura

My grandmother commissioned Isabel Coles to design a ring for her using two diamonds and a pearl from my great grandparents jewelry. She passed it on to me. It is a floral bouquet complete with intertwining stems as the band and notches for thorns. It is in its original, needle point box with Isabel Coles name and address on the inside,

Gosh…Isobel Coles is a known name in our family history. She was a cousin to my Grand-father (Baylies Coleman Clark). He was a navy pilot who went down in his plane on May 23, 1941. His wife (my grandmother) also became a pilot, and he asked his cousin to design a beautiful diamond pin of “navy wings”. My grandmother always wore this piece on holidays, and I am now lucky to have inherited Ms. Cole’s magnificent piece. She was a wonderful artist.

Dear Katherine,
Thanks for sharing your connection to Izabel. If you’d be willing to share an image I’d love to see the “Navy Wings.” And please feel free to contact me directly if you have any questions or information I overlooked regarding her career.
All the best,
Laura
lmathews212@gmail.com

Dear Nobel, How wonderful, and apologies for my slow reply. If you would be interested in showing me your ring I’d love to see how it compares with other items Izabel designed. All the best, Laura