The Rise of Plastic Partyware 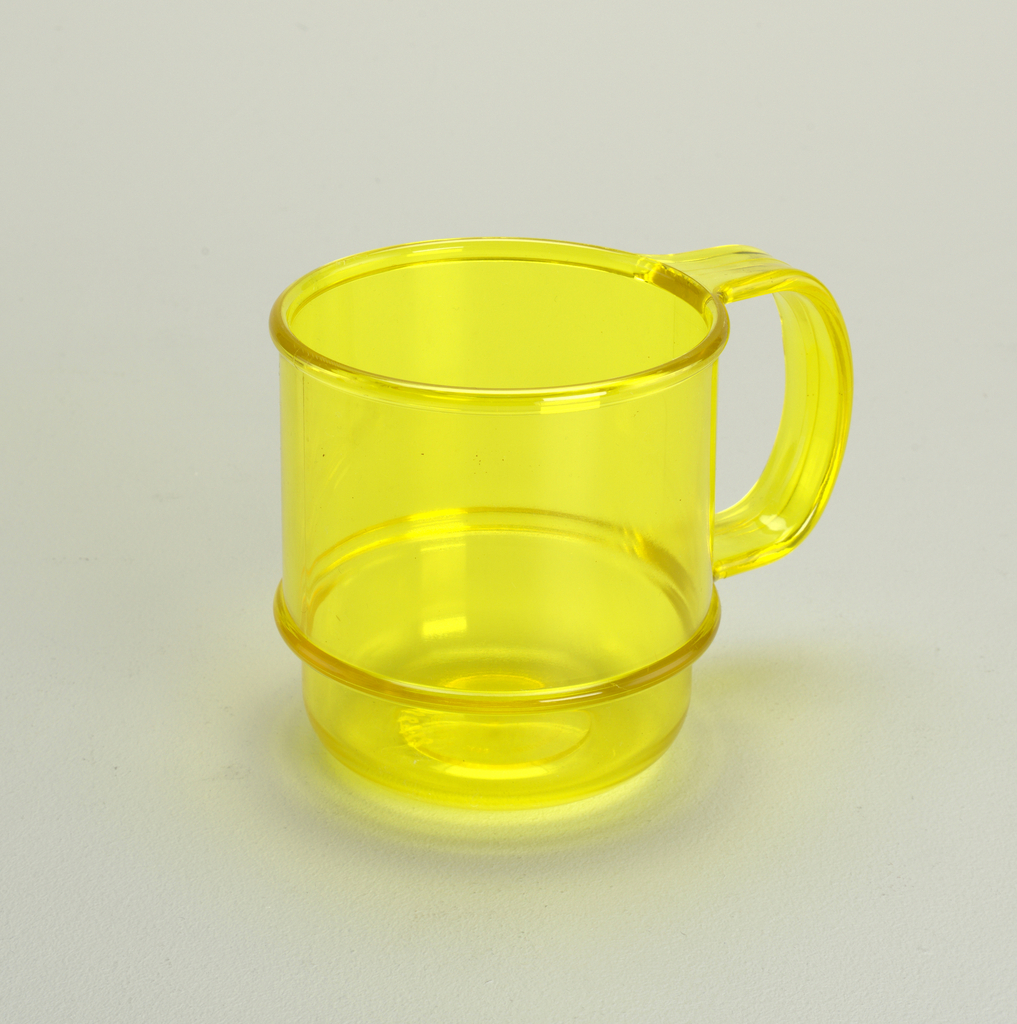 George Schmidt might have been on to something in 1987 when he wrote to Cooper Hewitt curator David McFadden that he was “firmly convinced that plastic is finally losing the murky reputation of the past as a cheap substitute material and is being accepted as a viable contemporary medium.” This mug, from Schmidt’s 1986 line Colorings for IDG Marketing, asserts both the popularity and skepticism of plastic, then and now.

Schmidt was born in New York in 1940 and grew up in Queens, attending Brooklyn Technical High School, Brooklyn Polytechnic Institute (now NYU Polytechnic School of Engineering) and finally graduating from Pratt Institute in 1963 with a Bachelor of Industrial Design. Schmidt served as an assistant professor of fine art at Hofstra University, teaching drawing and design until 1980, and was an occasional member of the faculty at Pratt, where he taught drawing, structure, and product design until 1984. Alongside teaching, he practiced industrial design and created products for a number of brands in a variety of media, although plastic seems to have been a favorite. Schmidt moved to Douglaston, Queens in 1968, and seven years later designed and built the home-and-studio where he still resides and works today.

It was there that Schmidt designed Colorings, marketed by IDG as “a collection of casual tableware” that “bridge[d] the gap between cheap throwaway party goods and your fine china and silver” in a 1987 brochure. The dishwasher-safe line incorporated both traditional shapes, such as tumblers or salad bowls, and new, specialized types such as an ice bucket lid that did double duty as a cutting board, or snack plates whose divided areas allowed users to pile on a variety of foods without worrying about co-mingling juices or flavors. The mug, like all pieces from the Colorings line, can be used for either hot or cold fare. Interestingly, IDG described it as being perfect not for tea or coffee, but for beer: “Fill it up with a can or bottle of beer and you will still have plenty of room for the suds.” This is very much in line with the company’s attempt to promote Colorings as the perfect service for outdoor entertaining, where sturdy plastic in bright jewel tones would add flair to a get-together where hosts would otherwise have to resort to disposable party goods. When not in use, the products interlock, relying on horizontal molded bands to allow for stacking.

All of the designs from Colorings are made of injection molded plastic, either high heat styrene (which gives the drinking vessels, plates, and bowls their sparkle) or acrylonitrile butadiene styrene, a slightly more rigid but equally shiny material used for the flatware and serving pieces. In a 1968 product brochure, IDG notes that the line is available in “FDA approved transparent colors.” This assurance indicates that even at that time, when styrene had been approved by the government and widely used for manufacturing for at least two decades, consumers still approached plastic with a certain degree of skepticism. That concern was warranted: while styrene occurs naturally in foods like cinnamon, peanuts, and coffee, it is considered a hazardous petroleum byproduct and has serious health implications. Luckily, when styrene is polymerized, or combined on a molecular level, it becomes polystyrene, the strong, transparent, lustrous, and safe material injection molded to make Schmidt’s Colorings pieces.

Although polystyrene is safe for food packaging and serving, and small amounts of styrene are even approved as food additives, the suspicions of consumers in the 1980s have not been entirely assuaged, and rightly so. Take, for example, the 2008 recall of Nalgene water bottles containing BPA, a compound similar to polystyrene used to make plastics and resins commonly found in drinking vessels. Today there are a number of reusable water bottles and storage containers widely marketed as BPA-free, and some consumers still avoid plastic altogether in favor of glass or metal containers. While IDG’s marketing of Colorings continued to raise questions of safety and skepticism of new materials, it’s clear that consumers have stood by George Schmidt’s prophecy about the primacy of plastic.

← Proof is in the Study
Geometry Meets Nature →

One thought on “The Rise of Plastic Partyware”

This “alternative” dinnerware also arrived at a time when many facets of everyday life were becoming liberated from prior conventions. As women flooded into the workplace in higher numbers than before, the “rules” for female accomplishment were being rewritten. Women were competing on a different stage that didn’t involve the perfectly set table for the family meal. Perhaps the colorful and casual tone of this mug reflects the change in women’s attitudes toward homemaking.