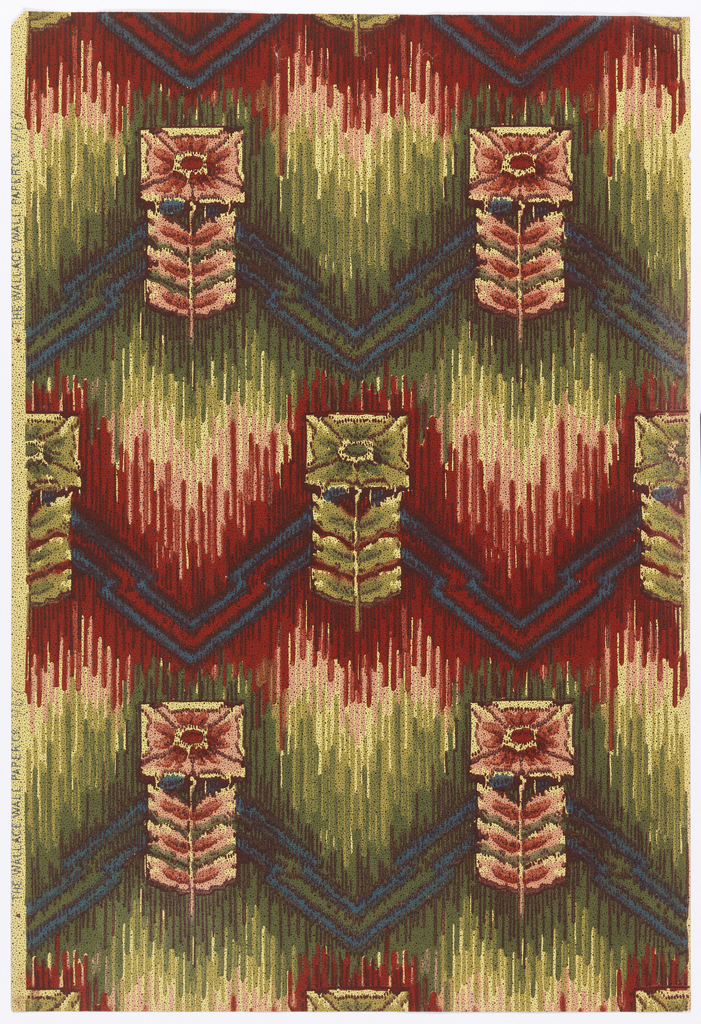 This wallpaper manufactured by Wallace Wall-Paper Co. is dated 1906-08. Although it is machine-printed on paper, the vertical thread-like lines make it look like a woven textile. A variety of textiles have been used to cover walls, so it is not surprising that the earliest and consistent influence on wallpaper design has come from textiles.

Floral designs are the among the most common wallpaper styles. This flower motif is not historically a Native American pattern, but was probably made to match the geometric style. The undulating vertical lines of color bleed into each other in the background. The color palette of greens, tan, and blues reflects the natural environment. The inclusion of the bright blue jagged zigzag lines that run horizontally through the wallcovering ground the flower motifs. The horizontal lines catch the viewer’s eye and lead to the focal points, which are the flower motifs that would have spanned an entire wall.

The flattened and repeated registers of flowers are reminiscent of the Mission Style or the Arts and Crafts Movement, prominent from 1860-1910 and known for its highly stylized renderings of plants and animals. Additionally, a Native American influence developed during the Arts and Crafts Movement, as evidenced by baskets and textiles featured in Arts and Crafts exhibitions and publications. The zigzag pattern is reminiscent of Navajo “eye-dazzler” textiles that were popular in the 1860s and 1870s. The term “eye-dazzler” refers to the intense colorings of the dyes used in the textiles which are traditionally composed of concentric diamonds with serrated edges that look as though they are vibrating. The background pattern may also have been inspired by flame stitch textiles.

Emily FitzGerald is a student in the History of Decorative Arts & Design graduate Program at the Cooper Hewitt, and is a Master’s Fellow in the Wallcoverings Department.