A Triumph of Simplicity 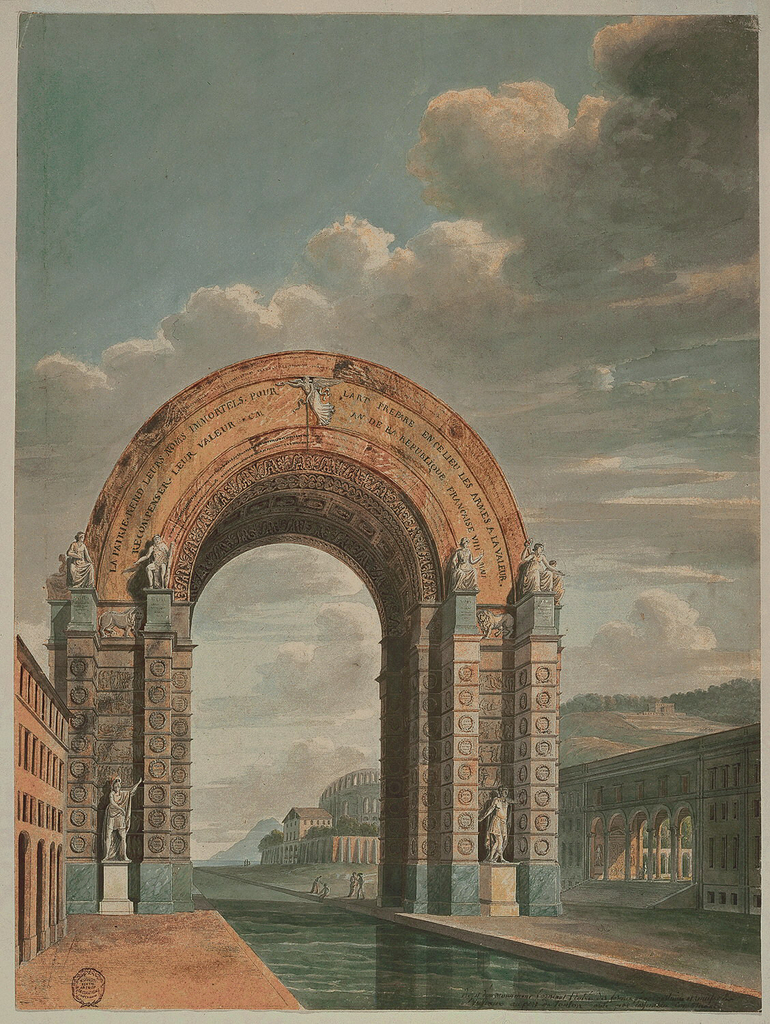 This drawing is the creation of Jean-Jacques Lequeu, a French architect and draftsman of the late 18th and early 19th centuries. A faint inscription in the bottom right corner of the drawing announces that it is a project for a monument at the entrance to the navy arsenal in Toulon, a major port in the south of France. Lequeu’s proposed monument is a colossal, free-standing arch that spans a canal and dwarfs the people and buildings next to and beyond it. The front, sides, and back of the arch are adorned with engaged, rectangular columns topped with over-life-sized statues. Even larger statues are situated between the columns at ground level. The face of the arch is covered with the inscriptions “LA PATRIE REND LEURS NOMS IMMORTELS POUR RECOMPENSER LEUR VALEUR” (The country makes their names immortal to reward their valor) and “L’ART PREPARE EN CE LIEU LES ARMES A LA VALEUR. AN DE LA REPUBLIQUE FRANCAISE VIII” (Here art prepares arms for valor. Year VIII of the French Republic [1799-1800]).

Lequeu based his Toulon arch on the ancient Roman triumphal arches that were built in honor of victorious generals, who processed beneath the arches in parades known as triumphs. The Arch of Titus, still standing in Rome today, provides a good starting point for understanding Lequeu’s arch. The arch is shaped like the central opening of the Arch of Titus, and its engaged columns and heavily decorated intrado (the underbelly of the arch) echo those of its ancient counterpart. The inscription on the Toulon arch hearkens back to Roman military success and its importance to the state. Lequeu even promises immortality for the names of French soldiers, which the ancient triumphal arches accomplished for their respective namesakes. Yet it is the physical placement of Lequeu’s arch that truly makes it a modern triumphal arch: as the canal was the entrance to the Toulon navy arsenal, French ships and sailors would have passed beneath the arch upon return from battle – victorious, ideally.

The Arch of Titus must have been a model for Lequeu, but the Toulon arch appears to have been most directly influenced by the Loggia del Capitaniato in Vicenza, completed in 1752. Lequeu likely saw it on his visit to the city in 1783.[1] The side façade of the Loggia has a central arch opening, four engaged columns, which like Lequeu’s arch are capped with statues, and statues on tall pedestals between each pair of columns.

Side façade of Loggia del Capitaniato by Andrea Palladio, Vicenza, Italy, 1752. Image by Calder Loth, courtesy of The Classicist Blog.

Overall, however, Lequeu replicated the straightforwardness of the Arch of Titus, which itself is one of the simpler Roman triumphal arches. He focused on the arch’s pure form, doing away with any sort of rectangular frame. In this way Lequeu, known for his forward thinking,[2] anticipated modern, free-standing arches such as the Gateway Arch in St. Louis, Missouri.

Vianna Newman was a Peter A. Krueger Intern in the Department of Drawings, Prints, and Graphic Design in the summer of 2015. She has a B.A. in Rome and the Renaissance and Italian from Indiana University.

One thought on “A Triumph of Simplicity”

A good and concise presentation of a little-known visionary architectural project.